Determine the traits in Gothic and Dark Romanticism works of art, such as those used by Francisco de Goya.

big idea
The themes of Dark Romanticism include concepts of anthropomorphized evil in the form of ghouls, werewolves, and devils, mysticism, and feelings of isolation and the tragic dimension of humanity, decay, and destruction.

The artwork that you will be looking at today dates from between 1781 and 1823, and focuses geographically on London, England, and Madrid, Spain.

Note, however, that Romanticism wasn’t solely about the visual arts. Dark Romanticism was actually also a significant literary movement, with authors such as Edgar Allan Poe and Mary Shelley—who wrote Frankenstein—as two of its most important literary figures.

2. Characteristics of Gothic or Dark Romanticism

Gothic—also known as “Gothick”—or Dark Romanticism has the following characteristics:

A style of medieval art (painting, sculpture, stained glass, fresco, and illuminated manuscript) characterized by themes of Marian devotion (an act of Christian piety directed at the Virgin Mary) and architecture with pointed arches, ribbed vaults, and flying buttresses.

The mystery of the power of the mind was a very important idea in the art of Dark Romanticism. Romantics became increasingly interested in the Gothic and sublime, metaphysics and the occult, and nightmares.

3a. Henry Fuseli
The artist Henry Fuseli, although Swiss, spent the majority of his career in Britain.

Fuseli’s painting below, entitled “The Nightmare,” depicts a young woman stretched across a divan in the midst of what is assumed to be a terrible nightmare. The creature perched on her pelvis is an incubus, a male demon that enters into women’s dreams in order to have sexual intercourse with them, thereby draining their energy and will.

Behind the young woman, emerging out from behind a curtain, is a black horse’s head with luminescent eyes.

did you know
Linguistically, the term “nightmare” has nothing to do with the word “mare,” which is a word used for female horses. Instead, it refers to a demon that typically rides a horse to get to its destination. Therefore, you can assume the horse and incubus arrived together.

Many modern interpretations of this painting have suggested that the painting’s overt sexuality served as a precursor to Sigmund Freud’s studies of dreaming and the unconscious mind.

did you know
Freud actually owned a reproduction of this painting.

In its time, the painting wasn’t well received by Fuseli’s peers, but it has gone on to become one of the works of art that best defines this genre of painting.

3b. William Blake
William Blake, a good friend of Fuseli’s, was an artist, poet, printmaker, and engraver whose work was reflective of his belief in the transcendent nature of the human imagination.

Blake had also developed his own interpretations of religion, going so far as to develop his own form of mythology. One of his mythological creations is depicted in this painting, called the “Ancient of Days.” This godlike figure, called Urizen, represents law and reason, and is shown within a sun-like disc and framed by clouds. Urizen is using an architect’s tool dipped into the inky blackness below in order to rework the universe, and existence itself, to fit his own personal vision.

For Blake, imagination superseded reason and logic. This theme of reason and logic trying to constrain the sublimity of nature is evident in another of Blake’s work, shown below, in which a nude figure of Isaac Newton is portrayed in a cave, using a similar tool in his attempts to explain the universe mathematically.

4c. Francisco de Goya
Spanish painter Francisco de Goya is considered by many to be the father of modernist painting. His long and fascinating career comprises a varied collection of artistic styles, mediums, and subject matter. Goya’s artwork serves as a social barometer of sorts—as a form of his own personal expression and as a reflection of the political and social climate of time.

hint
This approach is recalled 200 years later in the work of another Spanish artist with whom you’re probably familiar: Pablo Picasso.

Placing this next example in historical context, the fear of revolution and social upheaval in late 18th-century Spain was very real to the Spanish King, Charles IV, due to the political climate in neighboring France. In his attempts to solve the problem before it began, Charles did his best to limit the amount of French influence, particularly regarding literature available in Spain. France, it should be noted, was the center of the Enlightenment during this time—a period that saw the resurgence of human logic and reason.

Goya’s etching, called “The Sleep of Reason Produces Monsters,” is believed to be a work of art directed at the common people, perhaps a warning of the dangers in ignoring reason. It depicts a personification of reason, who is asleep, and the resulting release of a nightmarish menagerie of bats, owls, and a cat.

Several years after “The Sleep of Reason Produces Nightmares,” Spain was occupied by French forces during one of Napoleon’s many military campaigns. Goya was one of many who welcomed the French, believing that the influx of French culture and a new constitution was beneficial for the people of Spain.

Soon after, however, a rumor spread that the French army was planning on killing the royal family of Spain. People who rallied and fought against the French to prevent any harm coming to the royal family were themselves rounded up and summarily executed by a firing squad. Goya’s very famous painting, “The Third of May, 1808,” both documents and memorializes the Napoleonic Wars, capturing the horror of that day of execution, as well as the terrifying moments before a line of French soldiers, rather rigid and mechanical in their posture, fire point blank upon a group of common Spaniards.

The diagonally arranged composition depicts the bodies of the recently executed in the lower left-hand corner at the beginning of an axis that runs through the horde of terrified people you can see in the far right who are being processed up the stairs presumably to meet a similar fate.

The dramatic lighting brings your attention to the central figure that you can see in white, his arms extended as if being crucified. You can actually see the inclusion of the stigmata—the wounds suffered by Christ when nailed to the cross—on the palm of his hand. 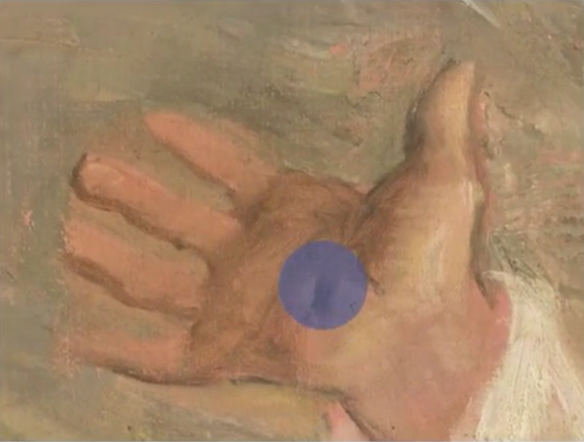 This painting became a symbol of the tragedy that took place—a reminder and warning in the hope that something like this would never happen again.

did you know
“The Third of May, 1808” actually had a companion piece also painted by Goya, called “The Second of May, 1808,” shown below.

This last example by Goya is a rather crazy-looking portrayal of the mythological titan Saturn—or Cronus if you’re from Greece—eating one of his children.

hint
This painting is based on an actual myth, as opposed to something that Goya created, and was a topic that earlier artists had addressed. Shown below is Peter Paul Rubens’ arguably more disturbing interpretation of the same topic.

By comparison, Goya’s depiction of Saturn seems almost cartoonish. The reality, though, is that this painting was created during a dark time in Goya’s life, and reflects the artist’s own bouts of madness. He had actually lost his hearing due to an infection, and felt rather alone and isolated as a result. In addition, his recent narrow escape from imprisonment at the hands of the reestablished Spanish monarchy and inquisition didn’t exactly improve his outlook, either.

Artwork such as this depicts anthropomorphized representations of evil, which is a characteristic of Dark Romanticism and may have been a not-so-subtle metaphor for Goya’s personal feelings regarding the Spanish government’s relationship with its people.

hint
Goya’s anger also comes through in a series from his later career called “The Black Paintings.”

To assign human form or attributes to animals, plants, or other non-human creatures

To assign human form or attributes to animals, plants, or creatures.

A genre of characterized by images of humanlike forms of evil i.e. Satan, devils, ghosts, werewolves, vampires and ghouls.

A spiritual belief in states of consciousness or aspects of reality beyond human perceptions including communication and insights with a supreme being.