Recognize the design element for a misleading graph.

1. Examples of Graphs in Environmental Science

As mentioned above, we're going to explore four different examples of graphs that are used in environmental science. Each graph will be paired with a verbal equivalent of what the graph is communicating.

1a. Line and Bar Graph Combination

For example, this first chart communicates that Edinburgh, Scotland's capital, has a mean peak maximum temperature of about 19 degrees Celsius in the month of July, and a low mean minimum temperature of about zero degrees Celsius in the month of February. The line and bar chart combination, shown below, are the visual representation of this information. 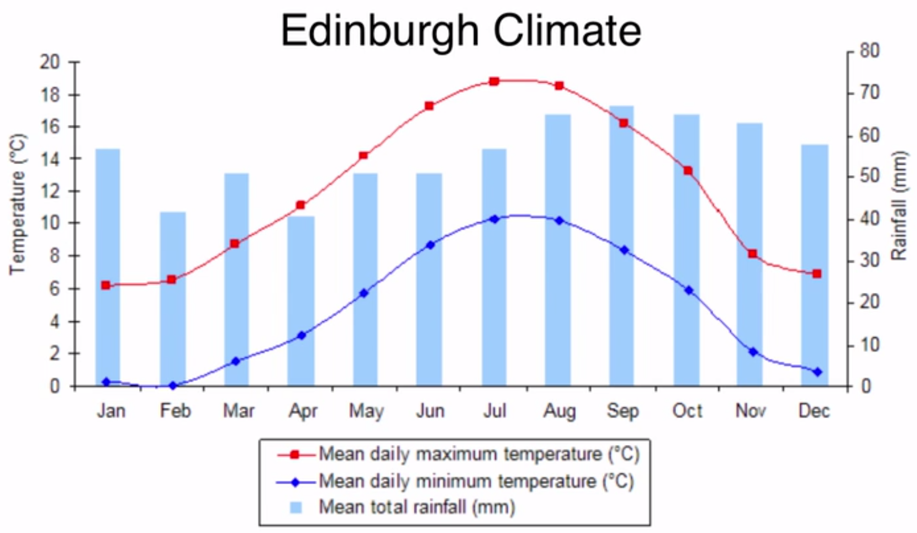 The title of the graph is "Edinburgh Climate." As shown at the bottom, the legend explains that the red line graph is for mean daily maximum temperature, and the blue line is mean daily minimum temperature. The x-axis indicates time with the months of the year, while the y-axis indicates temperature in Celsius on the left. This graph also shows precipitation in Edinburgh year-round in millimeters on the right, making for a second y-axis.

The next graph is of an ice core sample taken from Vostok, Antarctica. It shows multiple things, one of which is that the Earth has had multiple peaks in temperature and CO2 concentrations in the atmosphere over the last 400,000 years. 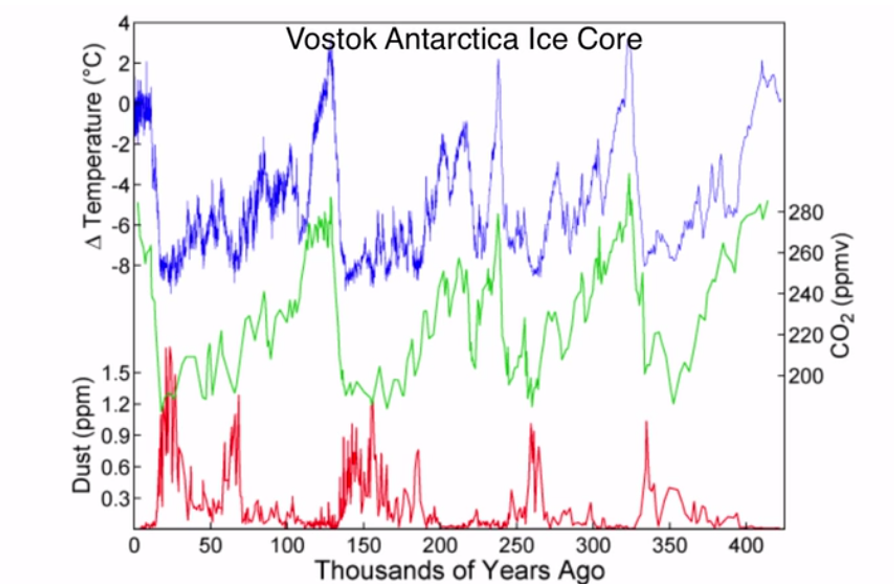 Looking at the graph, you can see the title, "Vostok Antarctica Ice Core," at the top. There is no legend in this line chart, but the x-axis shows time in thousands of years, starting at the making of the graph and going back 400,000 years. There are three y-axes showing three separate units: dust in parts per million, carbon dioxide concentration in parts per million by volume, and change in temperature in degrees Celsius. The graph shows a cycle of rises and falls in temperature, CO2, and dust over the last 400,000 years.

Next we're going to look at a visual chart first, and then examine a written representation of it. The title of the scatter plot below explains that this chart is about particulate matter pollution of a certain size, that was recorded as a daily mean concentration for Kern County, California. The x-axis shows time from the year 2001 to 2010, with a data point for every day of the year. The y-axis shows the particulate matter concentration measured at 2.5 micrograms per cubic meter. Note that the majority of data points fall below 20, but spike seasonally. 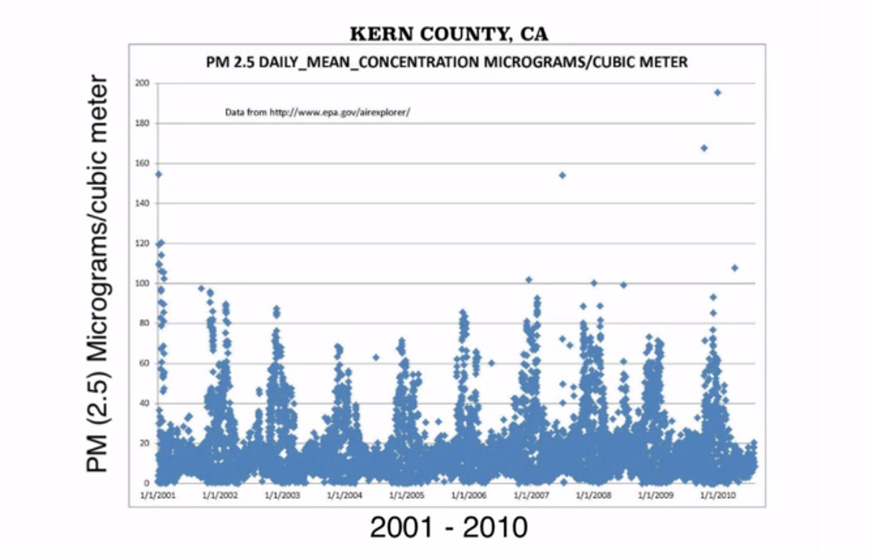 A written version would look something like this:
Kern County, California's daily mean particulate matter, at 2.5 micrograms per cubic meter, from 2001 to 2010, had the vast majority of days at or below 20. There is a seasonal variation in the middle of the year, where a spike occurs.

Let's do one more like this. The title of the chart below is "Annual world greenhouse gas emissions, in 2005, by sector." This pie chart doesn't have any axes or legend, but its subdivisions are separated by sector. As you can see, certain sections take the majority of the pie, while a few others make up the last small bit. 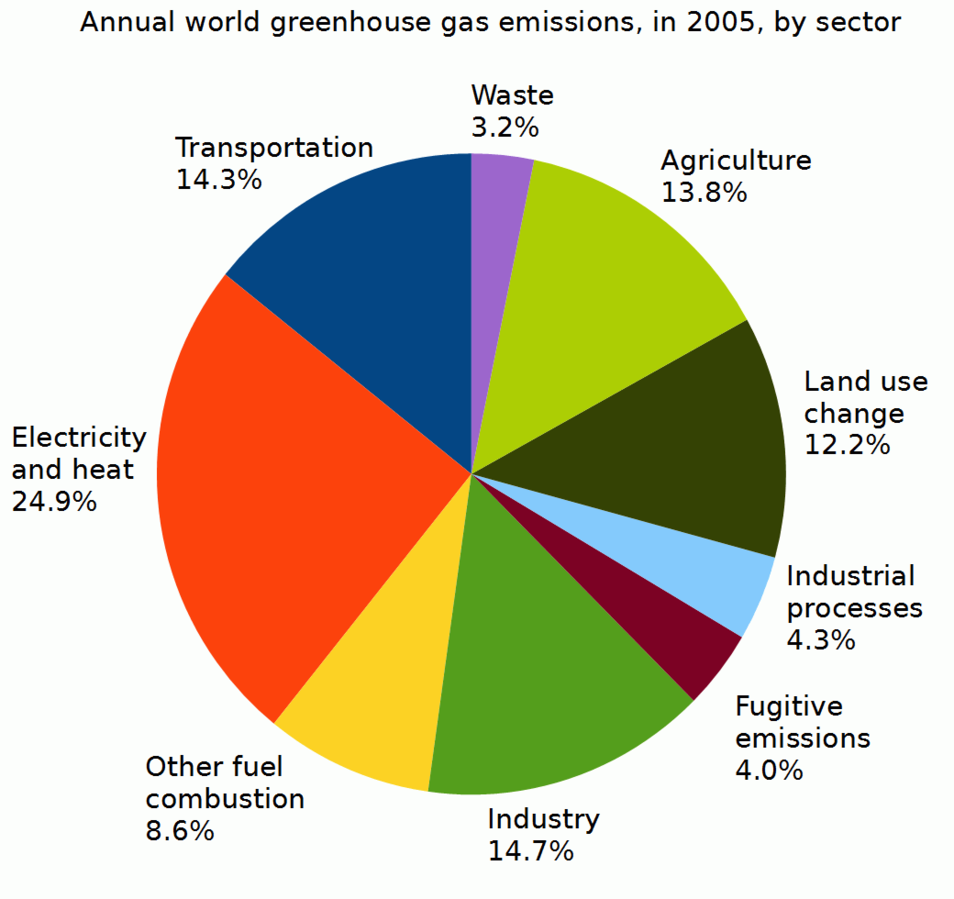 A textual version might look something like this:
In 2005, the majority of greenhouse gas emissions came from the electricity and heat sector, followed closely by Industry and Transportation. A few other sectors produced as well, but were only minor emitters.

In our last example, we're going to look at two different graph types presenting the same information. The first one is a bar graph of a fictional region. The title "Fictional Region Precipitation" is at the top of the graph. The legend indicates that the bar chart and its color represent rainfall. The x-axis represents units of time in years from 2012 to 2014. The y-axis represents rainfall in millimeters. From this graph, it can be concluded that the year with the highest amount of precipitation was 2014. 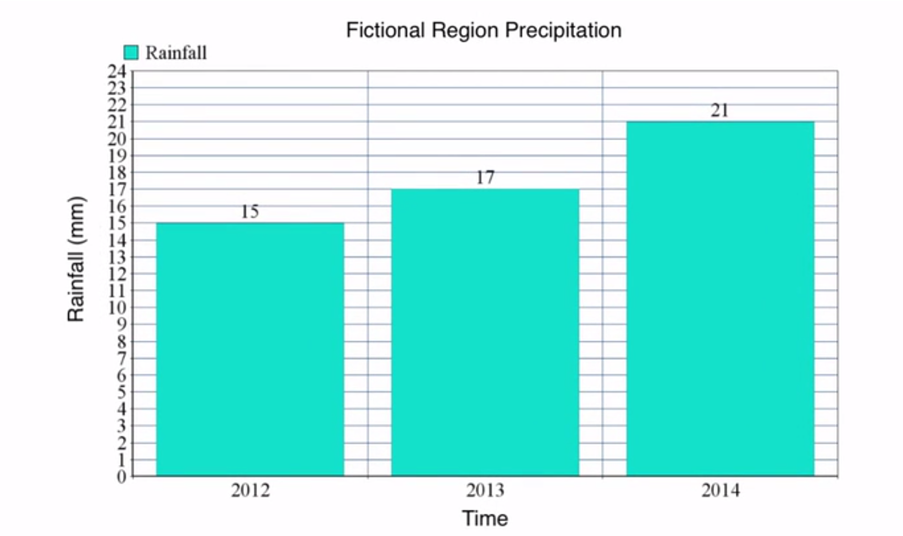 Next is a different chart called an area chart, using the same data. Once again, you can see the title indicating that this is a graph about rainfall in a fictional region. The legend is the same as the last. The x-axis is the same, and the y-axis is also the same. However, the data points are represented as shaded-in sections of the graph underneath them. This makes the graph look different, even though it is the same information. Despite appearances, the same conclusions can be drawn: 2014 had the highest precipitation in millimeters. 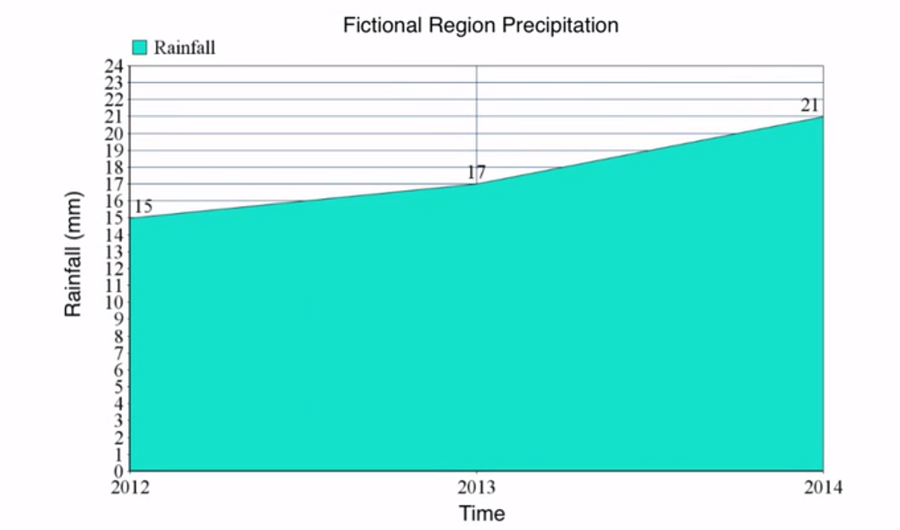 2. How Graphs Can Be Misleading

Now we're going to discuss how graphs can be misleading. Common ways that graphs mislead viewers are:

Consider the graph below. It is a made-up graph about a fictional corporation's sulfur dioxide emissions over time. The graph appears to indicate that the company's emissions are going down. However, there's a gap in the scale. The graph only shows data from the years 2010, 2012, 2014, and 2015. The years 2011 and 2013 are entirely missing. This can mislead the viewer's conclusion. 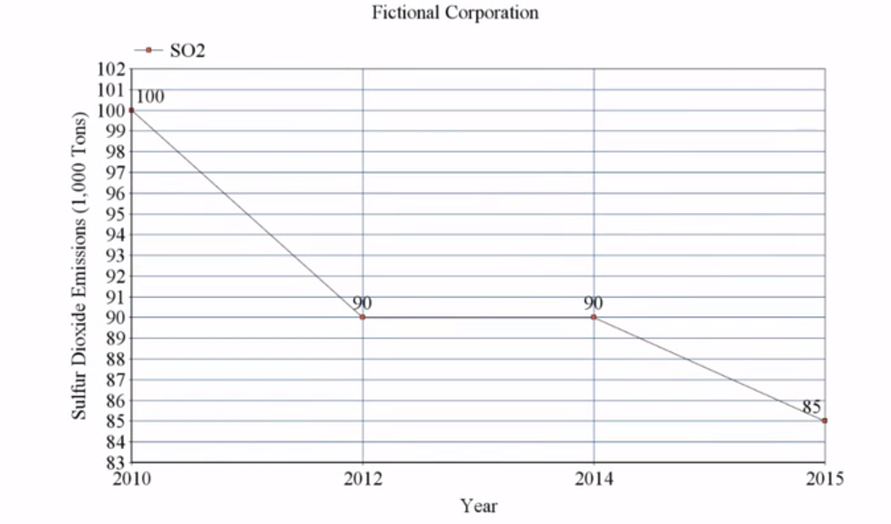 Now let's look at what the graph is like with those two years included. You can see that 2011 was the same as 2010, and 2013 was higher than all the rest. This graph provides a more accurate picture of what the fictional corporation's sulfur dioxide emissions look like from year to year. 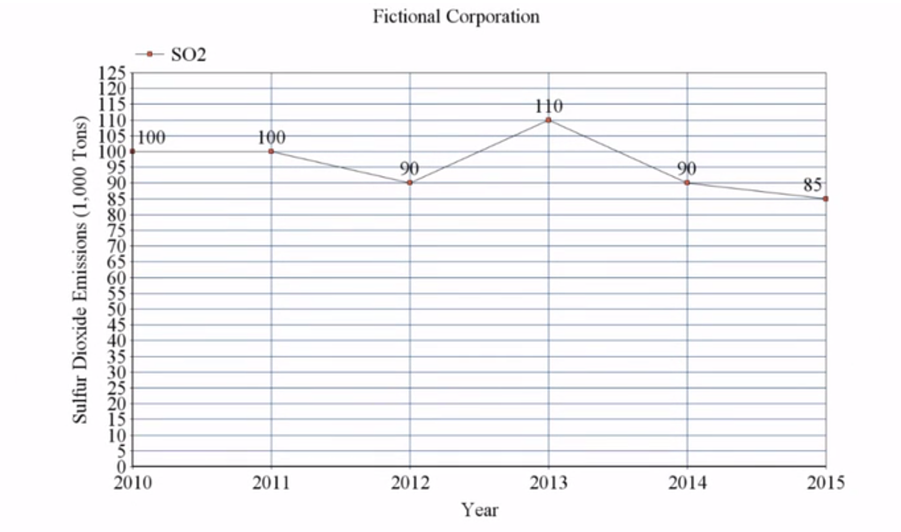 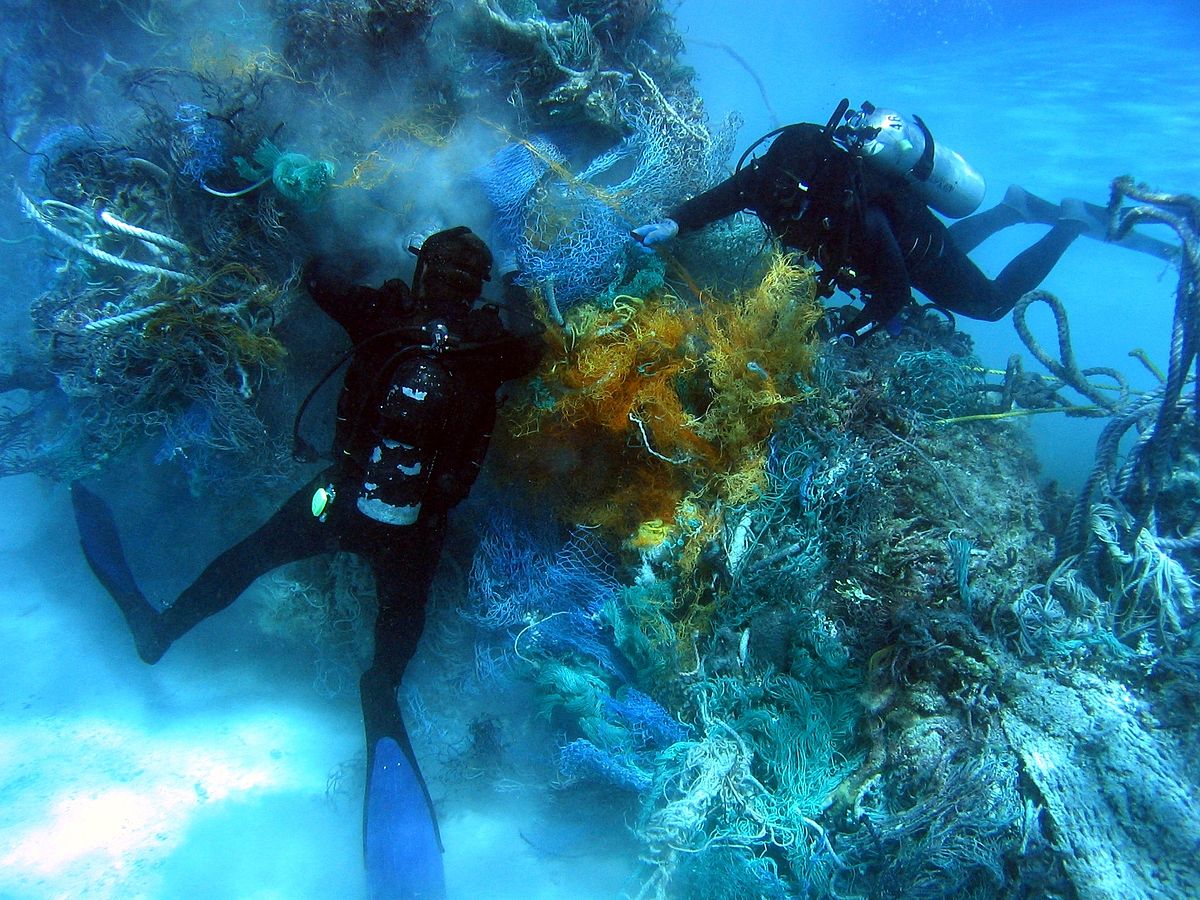 However, it is not necessarily a purely scientific endeavor. This photo may also have been taken with the purpose of generating feelings of sadness, guilt, or ecological stewardship. The goal of the photo may have been to encourage better ecological behavior, such as recycling, or regulation on ocean waste dumping.

hint
Always remember what platform you are consuming scientific information from, and what biases might be incorporated, depending on the source — be it a scientific journal, an environmentalist magazine, a political source, or popular media.

summary
We discussed several examples of graphs used in environmental science, and how graphs can be designed to be misleading. We also learned about how environmental photos can convey both information and emotion.