Growth of the City: Industrialization

Understand the factors that caused rapid industrialization in the late 19th century.

Tutorial
what's covered
Along with industrialization, urbanization transformed the United States during the Gilded Age. The millions who moved from the countryside — or from across the oceans — to the cities, encountered new technologies that made city life appealing. These technologies enabled many of the factories in which they worked to run 24 hours a day, seven days a week. Cities developed unique characteristics based on the industry that spurred their growth, but all of them suffered from problems related to rapid expansion. These problems, which were usually rooted in class inequity or racial/ethnic divisions, stimulated the social reform efforts that would later be associated with the Progressive Era.

This tutorial examines the relationship between city growth and social reform during the late 19th century, in three parts:

1. The Growth of the City

The expansion of the railway network and the massive migration of labor — which together initiated a transformative period of economic and industrial growth during the Gilded Age — contributed to the growth of American cities, especially those in the northeast and midwest. 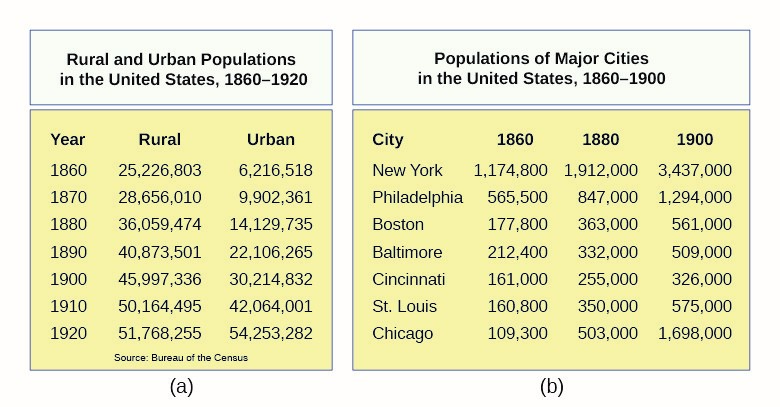 On the production side, plentiful supplies of coal in Appalachia and the Rocky Mountains fueled commercial coal-fired power plants. On the consumption side, Nikola Tesla invented the alternating current (AC) system, and Thomas Edison invented the incandescent light bulb. Together, these developments revolutionized the ways in which Americans used energy.

Coal-powered electricity also transformed how Americans communicated. The telephone, patented by Alexander Graham Bell in 1876, rapidly replaced the telegraph as the preferred form of communication. By enabling instant communication over greater distances at any time, telephone networks made "urban sprawl" possible. Just as electric lights enabled continuous factory production, the telephone initiated a system for order placement and fulfillment that outpaced the mail-order system.

Before the 1880s, the most common form of transportation in cities was the omnibus: a large, horse-drawn carriage that ran on tracks (for a smooth ride). The horses that pulled the omnibuses required food, care, and adequate rest. Their manure was an important pollution problem.

In 1887, Frank Sprague invented the electric trolley, which was a large wagon that ran on tracks (like the omnibus), powered by electricity instead of horses. Electric trolleys ran day and night, like the factories, providing workers with reliable transportation no matter what shift they worked. 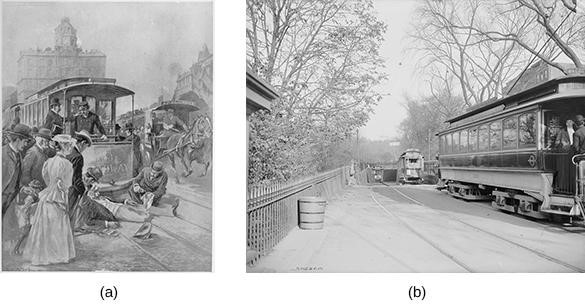 did you know
Boston’s subway system began operating in 1897, followed by systems in New York and other cities.

The first skyscraper — the ten-story Home Insurance Building — was completed in Chicago in 1885 (pictured below). Although it was possible to build a taller building, due to new steel construction techniques, another invention was required to make taller buildings viable: the elevator. The need was met in 1889, when the Otis Elevator Company, led by inventor James Otis, installed the first electric elevator. 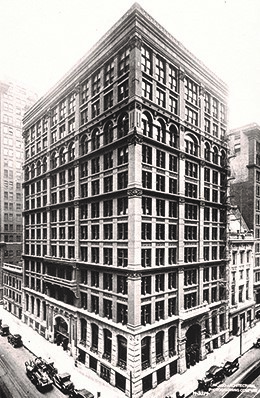 Here's a short PBS video clip from the Ken Burns Brooklyn Bridge documentary to learn more about this great technological advancement during the industrial age.

2. The Challenges of Urban Life

Beneath the glamor of urban advances were important problems: congestion and pollution.

Living conditions for most working-class urban dwellers were atrocious. In the absence of local, state, or federal regulations, many lived in crowded tenement houses and cramped apartments with poor ventilation and substandard plumbing and sanitation. Residents threw their garbage outside, where it decomposed or was eaten by scavenging animals.

did you know
Wild pigs roamed the streets of New York, consuming trash, until around 1900.

Running water (or any access to clean water) was not available in many locations. The combination of poor sanitation and impure water allowed disease to spread in many cities. Typhoid, cholera, and other disease epidemics occurred.

More than half of the children born in Chicago in 1882 died before they reached the age of five.

In 1890, almost 25 percent of all children born in American cities died within a year.

By the late 1880s, a number of cities introduced sewage pumping systems to provide efficient waste management. This improvement was slow to reach working-class neighborhoods, which were overcrowded and unsanitary. Working-class districts contributed the largest share of the death toll when disease epidemics swept through cities.

Churches and religious organizations were among the most important institutions that provided relief to urban, working class residents. Church leaders were motivated to reform city life by the social gospel.

The belief that churches should be as concerned about the lives — and living conditions — of people, as they were with their afterlives

The social gospel stated that all Christians should be as concerned with the living and working conditions of city dwellers as they were with their salvation. Congregationalist pastor Washington Gladden and Baptist clergyman Walter Rauschenbusch were among the foremost advocates of the social gospel. Both urged their congregations to pay attention to social ills, and to work with people of all classes to better society.

Rauschenbusch outlined the role of Christian churches in modern America as follows:

“The chief purpose of the Christian Church in the past has been the salvation of individuals. But the most pressing task of the present is not individualistic. Our business is to make over an antiquated and immoral economic system; to get rid of laws, customs, maxims, and philosophies inherited from an evil and despotic past; to create just and brotherly relations between great groups and classes of society; and thus to lay a social foundation on which modern men individually can live and work in a fashion that will not outrage all the better elements in them. Our inherited Christian faith dealt with individuals; our present task deals with society.”

think about it
Why do you think Rauschenbusch felt it necessary to argue that “our present task deals with society”, and to ask church members to look beyond their individual salvation?

Rauschenbusch, Gladden, and other proponents of the social gospel highlighted the work that Jesus did on behalf of the poor. They repeated his mantra, “love thy neighbor", and insisted that all Americans must work together to help the masses.

Along with the social gospel, the settlement house movement provided relief to city inhabitants.

Pioneering women like Jane Addams in Chicago and Lillian Wald in New York led this secular movement, which was based on concepts provided by social reformers in England. They created settlement houses in cities to assist the working class, particularly working-class women. Their services included child daycare, evening classes, libraries, gym facilities, and free health care. 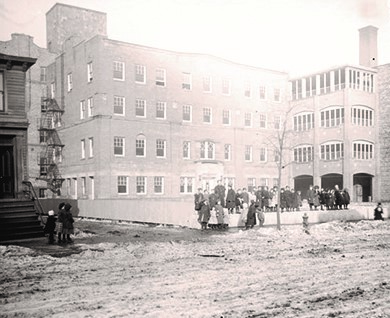 The settlement house movement not only provided assistance to working-class women, it also offered employment to women who had earned college degrees in social work. By living in settlement houses and interacting with working-class women, the graduates experienced a "living classroom", in which they applied what they'd learned and formed their own ideas about self-improvement. Female settlement house workers ultimately created a political agenda to solve urban social ills. It included fair housing laws, child labor regulations, and workers’ compensation reform.

“The Settlement [house] casts side none of those things which cultivated men have come to consider reasonable and goodly, but it insists that those belong as well to that great body of people who, because of toilsome and underpaid labor, are unable to procure them for themselves. Added to this is a profound conviction that the common stock of intellectual enjoyment should not be difficult of access because of the economic position of him who would approach it, that those ‘best results of civilization’ upon which depend the finer and freer aspects of living must be incorporated into our common life and have free mobility through all elements of society if we would have our democracy endure.”

A group of journalists and writers, collectively known as muckrakers, provided another important component of urban social reform movements.

Investigative journalists and authors who wrote about social ills, from child labor to the corrupt practices of big businesses, and urged the public to take action

did you know
Unhappy with the way in which investigative journalists forced social reform agendas into national politics, President Theodore Roosevelt was the first person to call them “muckrakers”. The name is a reference to an ill-spirited character obsessed with filth in The Pilgrim’s Progress, a 1678 Christian allegory written by John Bunyan.

Jacob Riis, a Danish immigrant who moved to New York City in the late 19th century and became a police reporter, was among the most notable muckrakers. He spent much of his time reporting on the slums and tenements of New York. Appalled by what he found there, Riis spread the word by delivering lectures and writing a book: How the Other Half Lives, published in 1890.

Riis used photographs effectively to make his points, as evidenced by the two provided below: 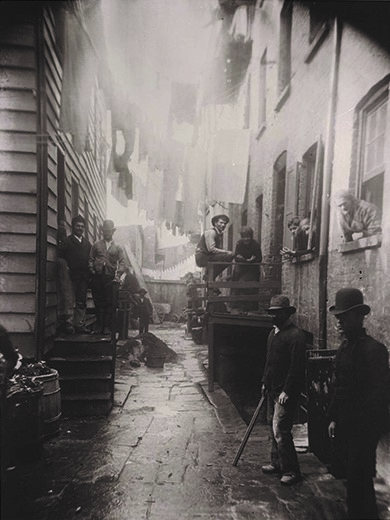 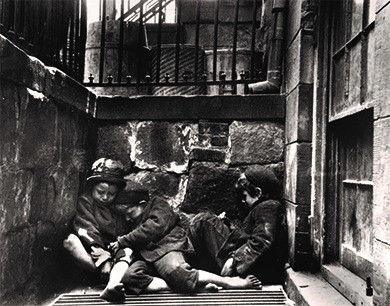 Riis and a group of amateur photographers moved through the various slums of New York City, laboriously setting up their tripods and mixing the explosive chemicals (the precursors of flash bulbs) that were used to create enough light to take the photographs. When they were published, these photographs, along with Riis' text, shocked readers and made him a well-known journalist. By exposing the injustices that were part of urban, working class life, Riis’s work challenged his audience to solve them.

brainstorm
Compare the ideas, motivations, and methods of the social gospel, settlement house movement, and muckrakers. What problems did they identify, and how did they propose to solve them? In what ways were their efforts similar to — and different from — each other?

summary
Urbanization spread rapidly during the late 19th century, due to a number of factors. Increased energy production (and consumption), combined with new inventions including the incandescent light bulb, the electric streetcar, and the electric elevator, transformed factory work and city life. However, most American cities were unable to cope with the rapid influx of new residents. Living conditions for the working class were horrid. In this context, some of the first social reform efforts emerged. The social gospel, the settlement house movement, and the muckrakers, exposed the problems that afflicted urban residents, and provided relief. Despite their efforts, conditions for most urban workers in Gilded Age America remained brutal.

Investigative journalists and authors who wrote about social ills, from child labor to the corrupt business practices of big businesses, and urged the public to take action

An early social reform movement, largely spearheaded by women, which sought to offer services such as childcare and free healthcare to help the urban working poor

Inventor of the telephone

Inventor of the electric trolley, which transformed public transportation in America’s growing cities

Installed the first electric elevator, enabling the construction of skyscrapers in American cities

American inventor who developed the incandescent light bulb, among other inventions