Or
Close Popup
+
2 Tutorials that teach Heraclitus and the Doctrine of Impermanence
Take your pick:
Previous Next

Heraclitus and the Doctrine of Impermanence

Tutorial
what's covered
Heraclitus of Ephesus was another influential Pre-Socratic philosopher. Like Parmenides, he was interested in metaphysics and the realm of appearances, and thought that the gods could not guide humans in these areas. However, he reached some conclusions that differed greatly from those reached by Parmenides, arguing that the impermanence of the world of the senses was the true nature of reality.

This tutorial examines Heraclitus and impermanence in three parts:

1. Heraclitus on the Secular

Though he was not affiliated with any philosophical school, Heraclitus, like Parmenides, was influenced by the rational theology established by Xenophanes. Recall that Xenophanes disparaged the practice of turning the gods into fickle meddlers in human affairs, and thought that actions taken by the gods were constant (i.e., according to the laws of nature). Heraclitus went further than his predecessors by emphasizing the human role in affairs. His approach to reality was entirely secular. He maintained that there was one true version of reality which he called the Logos.

did you know
The Greek word “logos” is translated as “account.” Hence, “biology” means to give an account of life. Logos was translated by ancient Greek Christians as "the Word," as in, “in the beginning was the Word” — a surprisingly Heraclitean notion.

Heraclitus believed that the Logos governed and/or organized all things, and.that it did so independently — without the participation of the gods. Although it is not clear whether he intended Logos to be distinct from reality (like a god), or dispersed through everything in the universe, all things in the cosmos are unified according to the Logos.

The Logos belongs in the realm of metaphysics because it is not in the world we experience, but underlies it. Though difficult to understand, the "Logos" can be comprehended by humans, even though not all of them are capable of grasping it. The Logos is always true, whether anyone is aware of its reality or not. It is independent of knowledge and language, and belongs in the realm of metaphysics.

2. Heraclitean Flux and the Unity of Opposites

The two most significant principles through which Heraclitus’ Logos governs are the Unity of Opposites and the Doctrine of Flux.

The Unity of Opposites is an assumption that the world is composed of opposites, and that opposites are linked in a system of connections.

There cannot be a mountain without a valley, and vice-versa. People cannot awaken if they have not first been asleep, and vice versa. Things are linked to what they are not. Heraclitus points out, for example, that ocean water is toxic to humans but necessary for fish. The opposite is true of fresh water.

think about it
Can you think of more unities of opposites? One that is frequently cited, especially in the philosophy of religion, is the importance of good and evil. Do you think this is a unity of opposites? Why or why not?

Beyond simply pointing out these unities, Heraclitus locates them inside us. He maintains that youth and age, life and death, are already within us. One quality becomes the other. Each of them changes into its opposite — young becomes old, life becomes death, healthy becomes ill.

Human beings occupy a privileged position in the universe according to Heraclitus. He indicates that our souls are connected to the Logos through language, a human phenomenon.

Heraclitus’ Doctrine of the Flux is closely related to the unity of opposites. It states that all things change over time. Everything is impermanent, and is in a constant state of change, moving from what it is to what it is not. He famously declared that you cannot step into the same river twice, since, as water passes ceaselessly, the river becomes new. (The Heraclitans later pointed out that you cannot step into the same river once.) You are not the same person you were yesterday.

think about it
Have you encountered anything in the world (other than metaphysical objects, such as numbers, laws of nature, etc.) that does not change?

Heraclitus holds that change is the ultimate nature of reality. All is flux. However, when reading the philosophy of Heraclitus, we must be careful to avoid taking some statements too literally. For example, Heraclitus' assertion regarding change is sometimes translated as a claim that all is fire. This should be read metaphorically, and in light of the rest of the text. Fire flickers, and in doing so it changes constantly. Saying that all is fire is a metaphorical way of saying that all is changing.

did you know
The metaphorical use of words — like using “fire” for “change” — was common in ancient Greek writing, because the language had a small vocabulary.

Both Parmenides and Heraclitus join Xenophanes in turning from divine causation and oracular knowledge to a secular concept of reality. For both of them, this involved examination of what is universal and regular in nature, rather than what is random. Both of them studied metaphysics, searching for the first principles and the ultimate nature of reality. They both recognized that the world of appearances is in constant flux, and that it is impermanent.

Parmenides and Heraclitus believed that something constant underlies the impermanent world of change. Parmenides identified it as the realm of being, the realm of what-is Heraclitus posited a Logos that contains the universal principles of the Doctrine of Flux and the Unity of Opposites.

big idea
What is the significant difference between the philosophy of Parmenides, and that of Heraclitus? It seems to be the status of change. Parmenides states that change is illusory, while Heraclitus claims that change is not only genuine, but essential to reality. 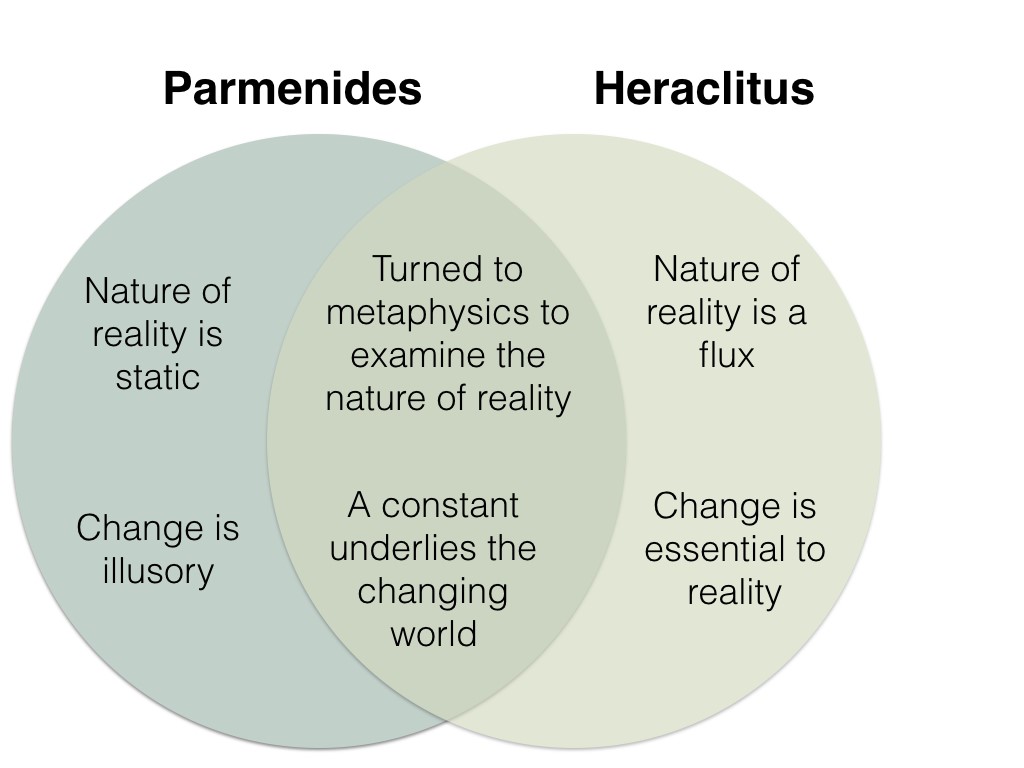 think about it
Do you agree with Heraclitus or Parmenides? Start by answering a smaller question: Which of the following is more important to reality: what changes, or what is permanent? If you believe that reality is somehow a combination of the two, you will begin to see the metaphysical problem that Plato inherited, and some of what underlies his philosophy. We will investigate Plato and his solution in a subsequent tutorial.

summary
Heraclitus, like Parmenides, was interested in metaphysics as a way to examine the true nature of reality without involving the gods. He maintained that a Logos governs all things, and does so via the Unity of Opposites and the constancy of Flux. Although his philosophy is in some ways similar to that of Parmenides, they are ultimately at odds regarding the ultimate status of change — essential or illusory.
Rating
Poor Fair OK Good Great
© 2021 SOPHIA Learning, LLC. SOPHIA is a registered trademark of SOPHIA Learning, LLC.