(more)
See More
Tutorial
what's covered
This lesson introduces teams and the characteristics of some high performing teams. You will learn the answers to a few questions: What is a team? What does it mean in a workplace? Are there types of teams? How does the development of a team work? When you develop a team, what does a high-quality team look like? Most importantly, what are the benefits of a strong team? You will cover:

You've heard the word team before: "I play on a volleyball team," "my daughter plays on a soccer team." A team is a group of people working together towards a common goal. On any given team, there may be different roles, but there may also be the same roles. The individual strengths of the team members determine what role each plays.

Ideally, members will have strengths aligned to the goals of the team. This team has six individuals:

A team may be as few as two people. There really is no maximum to the amount of people that can be on a team, but generally, fewer than 12 is what's recommended.

Strengths of individuals vary quite a bit, so teams can be composed of many different strengths in many different ways. However, for this tutorial, you're going to focus on four types of teams:

A functional team is called the working team. These are the people that have similar areas of strength, and they all serve a similar function. This team is often long term.

Cross-functional teams are on the opposite side of the fence. This is where you'll see multiple areas of expertise. This team is generally comprised of peers. If you were to imagine a hierarchy in a workplace, they're all on that same line. A cross-functional team may be long term, just like a functional one, but it may also be short term, depending on the goal.

Problem-solving teams may have multiple or similar areas of strength. It's really a hybrid of both cross-functional and functional when it comes to an area of strength that the individual is performing.

Just like problem-solving teams, self-managed teams have various areas of expertise or strengths. These people come together from various areas. They have their various strengths that are pulled together for a goal, but this team works independently. They're very autonomous in the nature of what they're doing. They have freedom to determine their own rules. 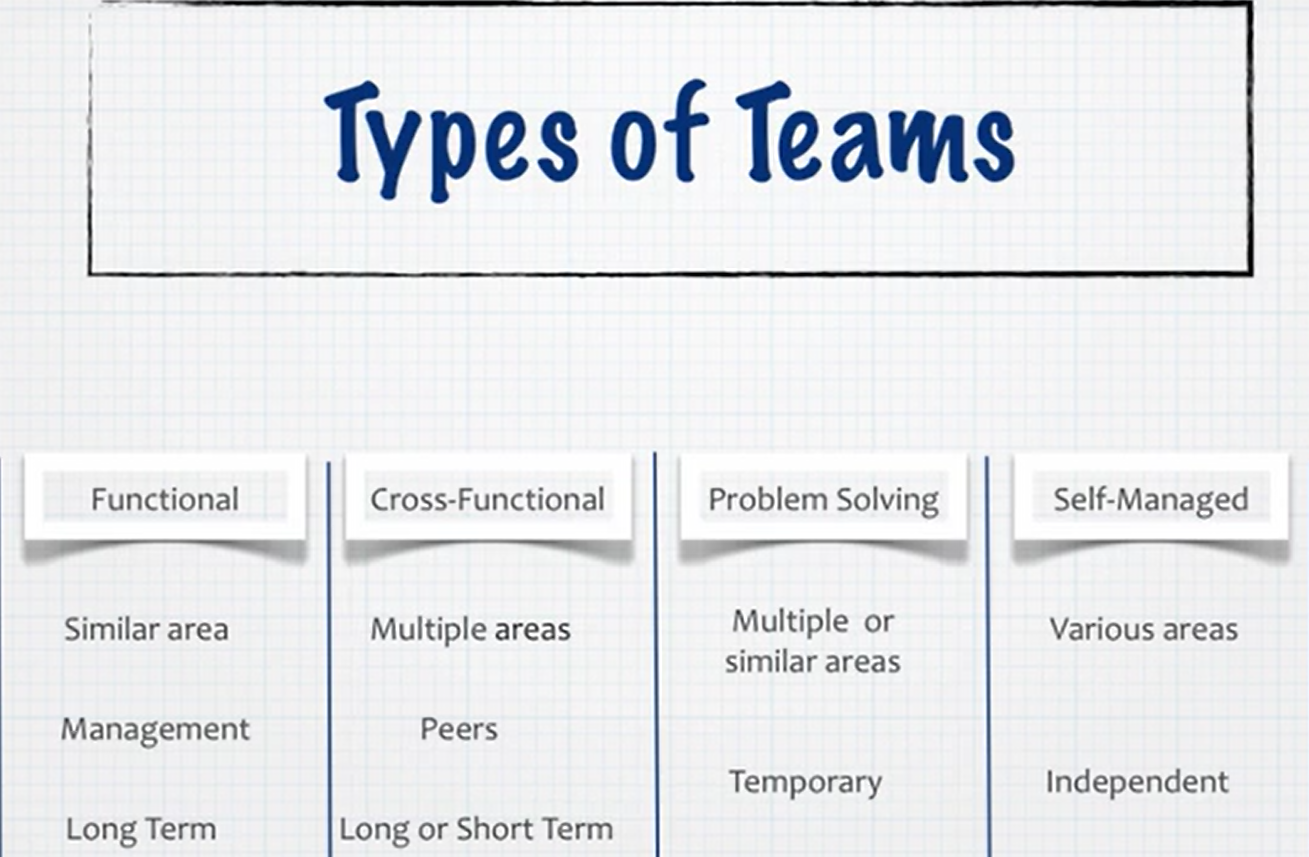 How are teams developed? Bruce Tuckman identified five phases of development in 1965:

people to know
Bruce Tuckman was a psychologist who analyzed 50 articles of group development processes and found that five stages rose to the top and were common of all teams.


In the forming phase, you're looking at what you need for strengths for this team to meet its established goal. You'll communicate how you'll achieve this goal, and develop any needed hierarchies, depending on the type of team.

Storming is the stage when you might see some individuals resisting the structure developed in the forming stage. There may be some competition within the team for certain positions.

did you know
Many teams, unfortunately, fail and disassemble at this stage.

If the team makes it past storming, the next stage is norming, when the team starts to come together and gain momentum.

Performing is when the team members work effectively and efficiently. Everyone is moving toward the same goal. Everything comes together, and the team has learned the process of resolving conflict.

Adjourning is when the team dissolves, either because the goal has been achieved or because of other, external factors.

Forming:
Say your restaurant is having trouble serving all its customers, but you can't afford to move to a larger space yet. You decide to create a food truck to solve the problem for a very specific amount of time. This is going to be a temporary situation formed to address a specific need.

You bring in your spouse to watch the books and set the pricing on the food that you are going to sell.

Next, you bring in your friend, Triny. She's a big foodie, and she loves to bake high-quality foods from scratch. This is exactly what you are looking for in your food truck.

Then you bring in your children to work the truck by selling the food and taking money.

Storming:
Triny needs to buy some high-quality ingredients, but your spouse says that the price that you've set isn't going to allow for them. You're going to need to compromise just a bit on your quality. Luckily, this conflict is resolved, and you're going to reach that norming stage.

Norming:
This is when you're all going to start to come together with the same goal in mind of serving good food from your food truck.

Performing:
Everything is going well because everyone is on the same page. You're all working toward that same goal of providing this good food.

Adjourning:
Then your team is going to dissolve in the adjourning stage. You've reached your goal. You've all come together and done a great job.

Next, its important to look at the characteristics and benefits of a high-performing team. You just saw in the hypothetical food truck scenario what it looked like to move through the stages of team development, but what you didn't see was what went on behind the scenes: all the communication that went on to make sure that everyone was very clear in their role.

Clearly explaining a role allows the person in that role to be accountable for their actions and leads to them feeling empowered. This leads to mutual trust. When a person's empowered in their role, you can learn to trust them. You see that they're passionate about the goal that they're moving toward. They know that you trust they'll do their job, and you'll let them do what they need to do.

hint
It's better to have a strong team and a weak plan than a weak team and a strong plan.

If there is a weak link, say in the example team, especially as small as it was, there's no way that the team could execute the plan effectively. If you develop a strong team, you can trust that they'll identify and overcome any obstacles that come in the way of a plan, even if it's not planned out as well as it should be.

Don't focus so much on the plan. Rather focus on the team. Once they're empowered and accountable, you know that the team is going to be able to jump over those obstacles and solve conflicts. This gives them confidence in their own abilities and the abilities of each other. 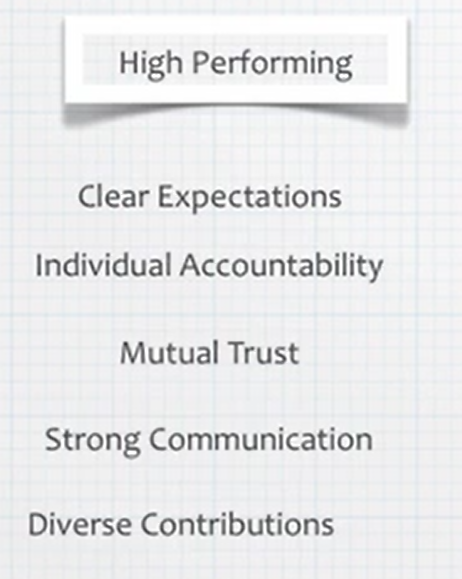 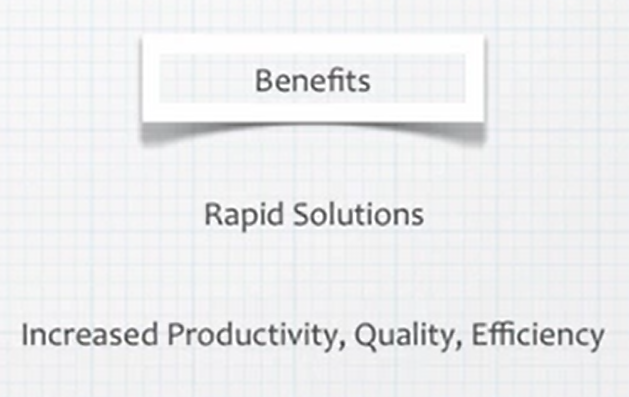 summary
What is a team? It is a group of people working together toward a common goal. Four types of teams were covered: functional, cross-functional, problem-solving, and self-managed. There are five stages to the team development process: forming, storming, norming, performing, and adjourning. High-quality teams have several common characteristics and benefits: a leader allows individuals to feel empowered and accountable; there is mutual trust. The benefits of a strong team include meeting goals efficiently and achieving higher productivity and quality.
Rating Header
Poor
Fair
OK
Good
Great
© 2021 SOPHIA Learning, LLC. SOPHIA is a registered trademark of SOPHIA Learning, LLC.