Tutorial
what's covered
This tutorial will cover the topic of histograms and binning. Our discussion breaks down as follows:

Suppose there's an elementary school class in Muncie, Indiana that chooses to keep track of the high temperature on each of the 180 school days. In Indiana, the temperature can get low in the winter, down to zero degrees Fahrenheit, and maybe near 90℉ at the beginning or the end of the school year.

To understand the overall trend of the data, you might not be interested in every single individual temperature. Instead, you might be more interested in how many days were in the 20℉'s--that is, days that the temperature was in the range of 20℉ up to 29.999℉, or in the 30s℉, 40s℉, etc.

The idea that we can break those temperatures that occur over a wide range into more manageable intervals and categorize them that way is called binning. Binning allows us to make a frequency table out of those categories.


This means there was one day out of the year that it hit the 90℉'s, seven days were in the 80℉'s, etc. Now we can create a histogram.

A histogram is somewhat similar to a bar graph in that, on the horizontal axis, you’re going to display the temperatures, which are our categories now. The only difference is these categories are numbers. Our bins go from 0 to 10, 10 to 20, 20 to 30, 30 to 40, etc. so it makes sense that we would put 0 as being first, and ten as being second, and 20 as being third. The frequencies, just like a bar graph, will go up the vertical axis. 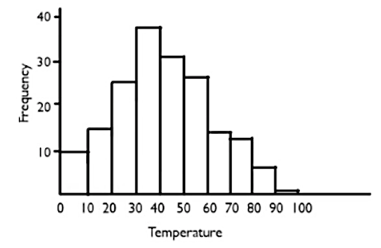 A distribution of data that shows the frequency of different ranges of values. Each frequency is the height of a bar.

The method of deciding what widths of categories should be used on a histogram.

The way we choose to bin data can change the look, and at times, the shape of the histogram.

Reviewing the frequency table, there are ten days in the range between 0℉ and 10℉. Suppose there were four days between 0℉ and 4℉, and six days were between 5℉ and 9℉. Therefore, we took one bin and split it into two bins. If you do that with every one of your bins, you end up with twice as many bins and twice as many bars on your histogram. 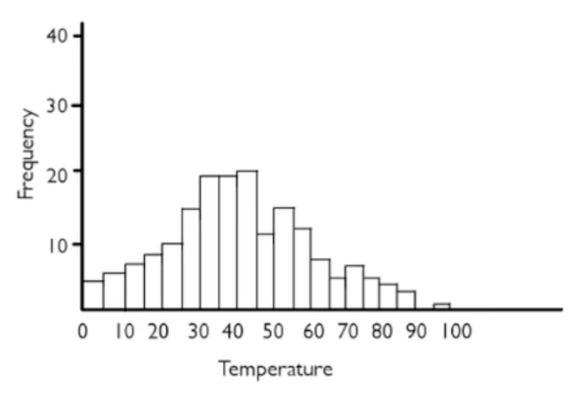 In this new histogram, notice the frequencies. The bars are not as tall as they were before, but they still provide the same overall shape. However, there are not very many bars overall. There's a lot of data in one part of the graph and not a lot in the other parts. You'll note that in the 90 to 95 bin, there's no bar. The reason for this is that when we broke up that bar, the one data value that was in the 90's was actually in the 95 to 99 range. When there's no data in a particular bin, there's not going to be any bar that extends up from the x-axis.

big idea
The binning process is important. Problems can arise if you make the bins too narrow. In the previous examples, there were bins of width 10 degrees and bins of width 5 degrees. You could have decided on bins with width 1 or 2 degrees, but perhaps you wouldn't have gotten the same overall shape of the distribution.

There are two main problems you may have with binning: 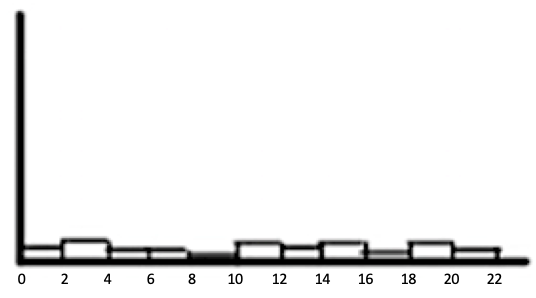 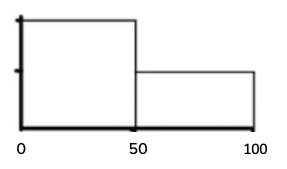 You might confuse a bar graph with a histogram from time to time. However, there are two key differences between the two kinds of graphs.

summary
Histograms are distributions for quantitative data-- specifically, they are typically used for more "spread out" data. This "spread out" data is binned and used to create bars, utilizing the frequencies in those bins. It is important to appropriately bin the data so that you don't get the pancake effect or the opposite problem, the skyscraper effect. Histograms can look like bar graphs but are different in that in histograms, the bars actually touch, and the actual order of the bars matter.

A distribution of data that shows the frequency of different ranges of values. Each frequency is the height of a bar.