Or
Close Popup
+
3 Tutorials that teach How Money Has Developed over Time
Take your pick:
Previous Next

How Money Has Developed over Time

Determine the functions of money.

(more)
See More
Tutorial
what's covered
What, exactly, is money? Is it the bills that fold in your wallet? Or the quarters and pennies that jingle in your pocket? Or is it something different, something much more? The answer might surprise you. This tutorial will cover has money has developed over time, discussing the history and functions of money. Our discussion breaks down as follows:

1. How Money Has Developed

Let's begin with how money has developed over time. Now, traditionally, when people want something that someone else has, they can go about it through an exchange. A medium of exchange is simply an item that allows a simplified sale or purchase process.

Traditionally, before people had easy mediums of exchange, they followed a practice called bartering. Bartering involves a direct exchange of goods between two people.

You can see how this is beneficial for both parties. However, there is a potential problem. Now the dairy farmer already has a chair, so when the carpenter wants some more milk, what can the carpenter provide to trade?

This dilemma resulted in individuals accepting things that were considered universal--a universal exchange. For instance, suppose the carpenter, in this case, builds a chair or other item for a miller, and in exchange, he receives a big sack of flour. Then, when he wants something from somebody else,--like milk, for instance--he can simply trade cups of flour for that milk, and that serves as the medium of exchange. 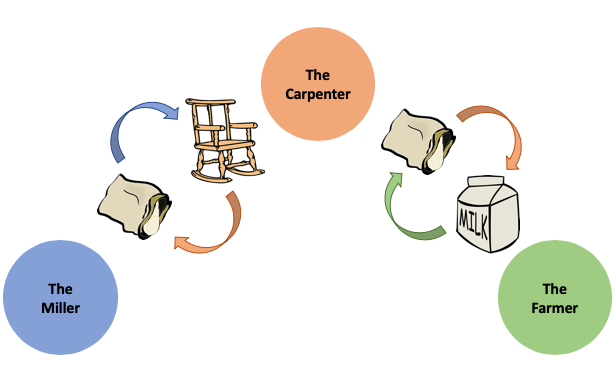 The flour becomes that thing by which he can exchange "product for product" and get the goods that he wants or needs. The flour is portable, divisible, and it can be stored for a long period of time without spoiling, so it's also durable.

This is essentially how the whole idea of money as we know it today started.

An item that allows a simplified sale or purchase process

For something to be considered money, it must be the following four functions.

For money to serve its purpose, people have to agree on what it's worth; there must be an agreed-upon value between the two parties. This is determined in part by the supply of money that exists. The more money that is in circulation, generally, the less value it has.

When money supply goes up, the value goes lower, and when the supply goes down,--because there's less of it out there and people want more of it--the value of that money tends to go up.

It can be a challenge to measure money in this way, especially when factoring across national boundaries, because, again, there must be a consensus as to what this money is worth. Typically, businesses monitor money supply as a reflection of the economic health of a country.

Generally speaking, there are two different types of money supply in the economy that are evaluated to assess a country's economic health.

Here is an example of a money supply growth chart for M1 and M2. Note, this particular one also has M3, but we're going to focus on the M1 and M2 money supply. This graph reflects units in billions of U.S. dollars.

In the M2 supply, however, you can see that right at the mid-'90s, there was a little pause, then it continued to go up. So, as far as immediately convertible cash is concerned, the M1 was holding steady or retreating a bit in the early 2000s, before starting to come back again.

Money sources that are less liquid, like CDs and investments, kept climbing higher and higher, and as a percentage of the total, you can see the M1 supply steadily shrinking as a percentage, meaning there is less immediately convertible cash here and more in the M2 supply.

All of the money that is in the M1, plus funds or investments that are easily converted into cash such as a saving account or money market fund

summary
Today we learned how money has developed over time. We also learned about the four functions of money; it must be portable, divisible, durable and stable. We learned about money's worth, and how an expanding economy will generally have a higher amount of money in supply. Lastly, we discussed the two types of money supply: M1 and M2.

Money that is either physical money or immediately accessible through an account such as a checking account.

All of the money that is in the M1, plus funds or investments that are easily converted into cash such as a a saving account or money market fund.

An item that allows a simplified sale or purchase process.