Or
Close Popup
+
2 Tutorials that teach How to Find a P-Value from a T-Test Statistic
Take your pick:
Previous Next

How to Find a P-Value from a T-Test Statistic

Calculate a p-value for a left-tailed, right-tailed, or two-sided t-test with a given t-test statistic.

(more)
See More
Tutorial
what's covered
In this tutorial, you will learn how to find a p-value from a t-test statistic using the calculator, the t-table table, and Excel. Our discussion breaks down as follows:

The average ACT score in Illinois is a 20.9. There's one high school in particular that believes its students scored significantly better than the state average. Because the school believes that its students performed better, this is an upper tail test.

In order to test this hypothesis, the school took a random sample of 15 students' scores and got an average of 22.5, with a standard deviation of 2.3.

The first step is to calculate the t-statistic:

This gives us a t-score of 2.694. This score is plotted on the t-distribution below. 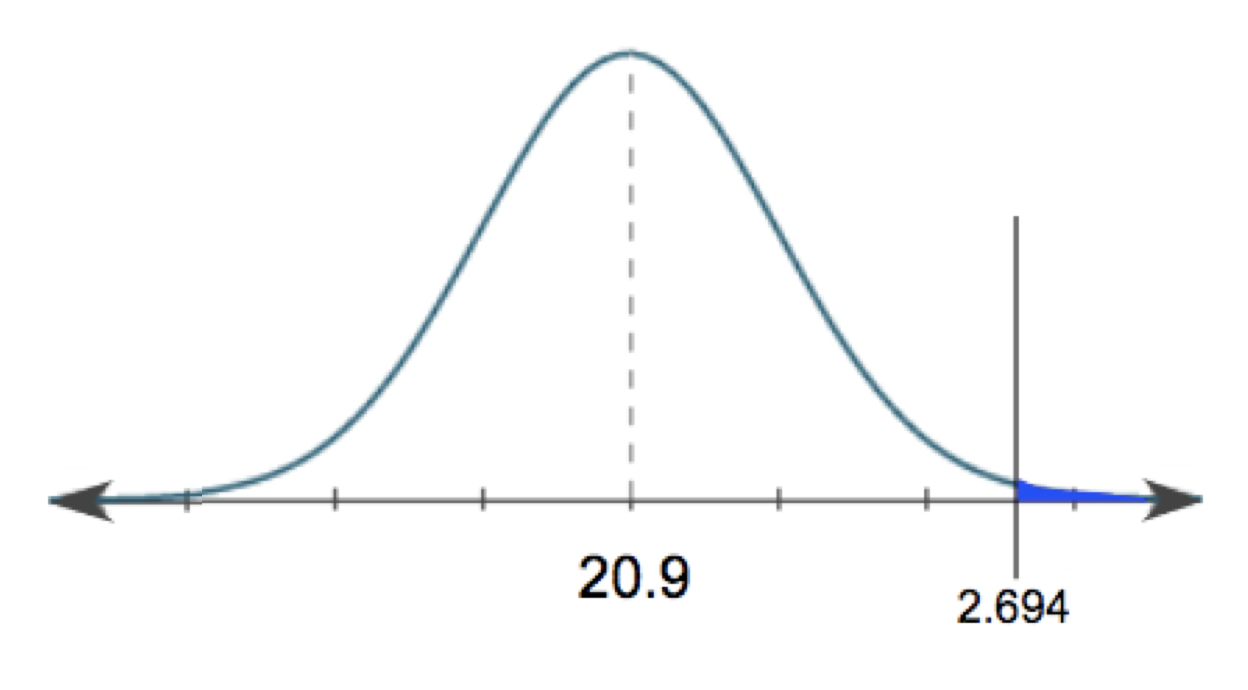 In order to convert that into a p-value, the first method is on a graphing calculator. On your calculator, go ahead and hit 2nd DIST. We're interested in this sixth function, tcdf, which stands for "t cumulative density function." 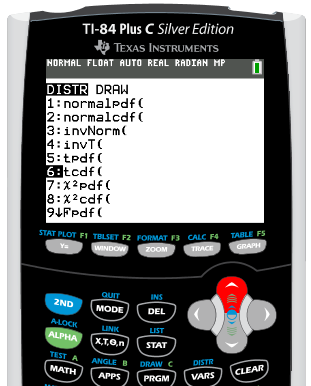 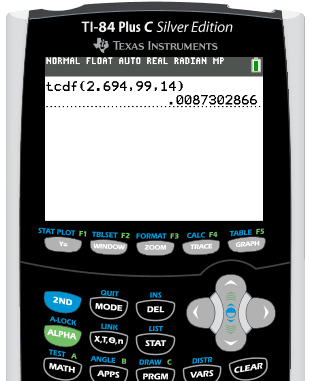 We can also use the t-table. Now, tables sometimes can only get us an estimated p-value. They can't get us an exact p-value, like the calculator or Excel. But sometimes it's all we have, and it's definitely sufficient. In this case, remember we had a t-test statistic of 2.694. All of the values inside our t-table are a bunch of t-scores. On the left hand column, these are the degrees of freedom, and the top row contains all of our corresponding p-values.

big idea
The t-table only shows positive values, however, you can still use this same method for a left-tailed test; you would just look for the positive of your t-statistic.

To convert our t-test statistic into a p-value using Excel, go under the Formulas tab. We are going to insert a formula that falls under the Statistical column. We are looking for t-distribution dot rt, or T.DIST.RT, because we're performing a right-tail test.

The quality assurance of a soda company wants to make sure that its machines are working in filling its 12-ounce cans of soda. Because it would be a problem if the machines were significantly over-filling and under-filling the cans of soda, the company needs to perform a two-sided test.

The company took a random sample of 10 cans of its soda off the production line and got an average of 11.8 ounces with a standard deviation of 1.2 ounces.

We're looking at quantitative data, which is ounces of soda, and we also do not know the population standard deviation. Therefore, we're going to perform a t-test.

The first step is to calculate the t-statistic:

The t-test statistic is negative 0.527. This score is plotted on the t-distribution below. 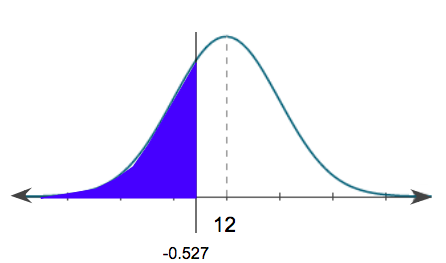 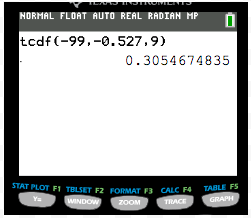 However, this is not our final answer. This was a two-sided test, and this is only the p-value that's associated with the left-tail, or the left-shaded region. We also have to get the corresponding upper-tail as well, which would fall at a positive 0.527. 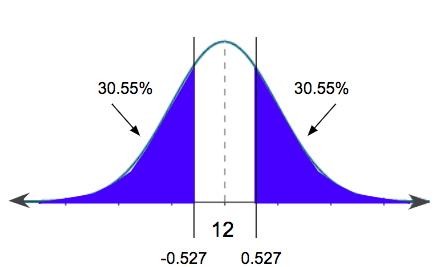 Luckily, because these two areas are equal, all we have to do is take this p-value that we got on the calculator, and multiply it by two. The p-value for this problem is 0.3055 times 2, or 61.1%.

Now, let's find the p-value using the t-table. To get the p-value from the t-test statistic of a negative 0.527, remember, we're going to look at the corresponding degrees of freedom, which in this case was a nine, and we're going to find the closest t-score we can to what we calculated. The closest value to 0.527 is this 0.703.

There's nothing that we can estimate. We can't take an estimate between two values, because our t-score falls below the very first value. Because we're doing a two-sided test, we can just look at the row for two-tailed and get a p-value of 0.5, or 50%. We could have also looked at the one-tailed row and doubled the value of 0.25 to get the same answer.

To convert our t-score into a p-value using Excel, we're going to go under the Formulas tab and insert a formula again under the Statistical column. But because this is a two-sided test, we want t-distribution dot 2t, or T.DIST.2T, for two tails. Even though the t-square that we calculated was negative 0.527, in Excel you always put in the positive tail. We're going to go ahead and put in the positive 0.527 with our degrees of freedom of 9.

Notice how we get the same p-value value of 61.1% that we did when using our calculator.

summary
Today we learned how to find a p-value from a t-test statistic using the calculator, the t-table table, and Excel. We did this for two types of test: a right-tailed test and a two-tailed test.

A measurement, in standardized units, of how far a sample statistic is from the assumed parameter if the null hypothesis is true