Like we discussed in an earlier tutorial, we're going to compress history into a year. This time, however, it's going to be just earth's history, not universal history.

Over time, human behavior and skills have changed and evolved. During the Old Stone Age between 200,000 and 10,000 years ago, humans, or Homo sapiens, were hunter-gatherers. They often lived in seasonally mobile small tribes.

However, with the advent of agriculture approximately 10,000 years ago, the Neolithic era began. Homo sapiens became more sedentary, primarily shifting to farming and settled communities. The invention of agriculture, along with a host of technologies and practices that resulted, eventually gave rise to human population growth and expansion.

This graph shows human population growth since 1000 CE or AD. 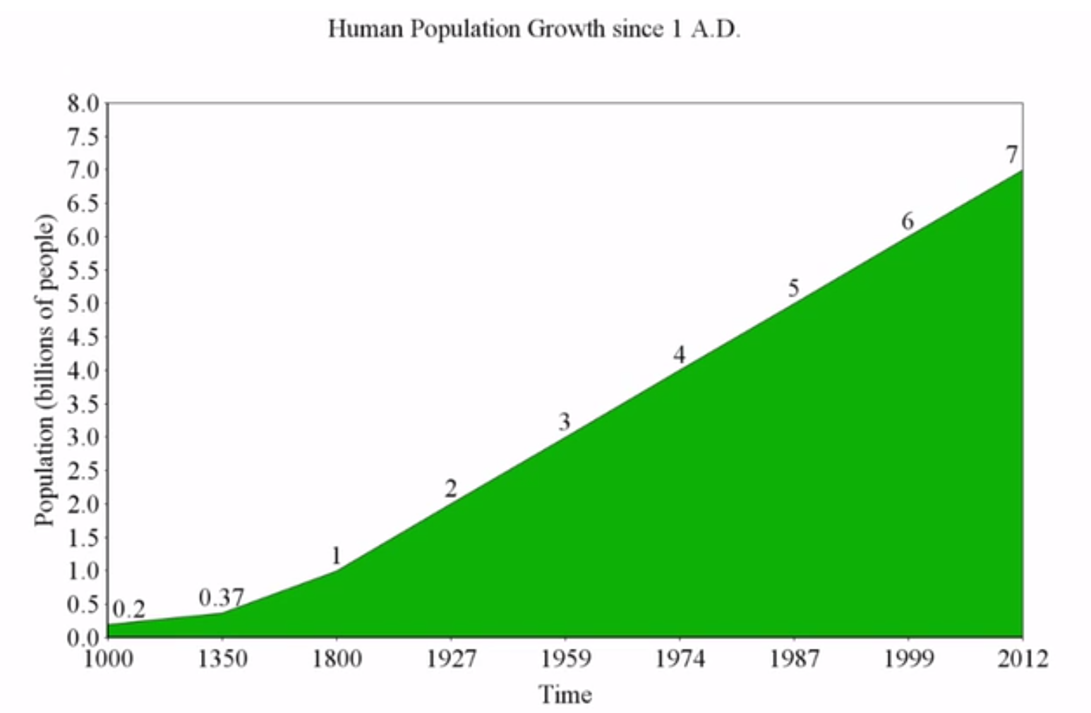 Population growth really exploded following the beginning of the Industrial Revolution for several reasons, including:

The Industrial Revolution, combined with the Green Revolution in the mid-1900s, also increased food productivity and reduced famine drastically.

The Green Revolution was a combination of improved agricultural crop breeding, mechanization of farming, and chemical production of fertilizer. It increased world-wide production of food crops, especially in developing nations.

Human population growth has continued over time because of technological advancements in tool-making.

The modern tractor, which increases productivity and decreases human labor requirements simultaneously, allows for increased food productivity, which can then support a larger human population.

Agricultural advancements, such as chemical fertilizers, have increased crop productivity, by providing needed nutrients quickly with less human labor. This has also increased food productivity and allowed for a larger human population. In general, advances in agriculture and animal domestication have made it so that fewer people are needed to work to feed many people, which has in turn allowed for the specialization of other people's time. This specialization allowed for more technological advancements to sustain human health, which has allowed for even more population growth.

In addition, technological advancements in industrialization, such as highly-efficient manufacturing facilities, have generated goods and products that can preserve and protect human health, and are cheaper and more widespread. This also has allowed for a larger human population. In general, technological improvements have sustained human population growth because they have encouraged three things: