Understand the time period and geographic region associated with works of art covered in this unit.

This unit will cover works of art and architecture spanning from approximately 22,000 BC through 400 AD. Within each lesson you will learn about the specific dates of various civilizations, works of art, or other important events that shaped the artwork of the time period.

This unit will cover information that takes us on a trip all around the continents of Europe and Africa. We will explore cave paintings in Spain and France, Stonehenge in England, the civilizations that settled in Mesopotamia near present-day Iraq, Egypt, Greece and the nearby islands, Rome, and the Indian subcontinent. The timeline and map below highlights some of the key events and locations you’ll learn more about in this unit.

Note that dates are approximate.

did you know
The first Homosapiens appeared in Africa around 200,000 BCE.

The map below highlights the regions of the world that will be covered in this unit. 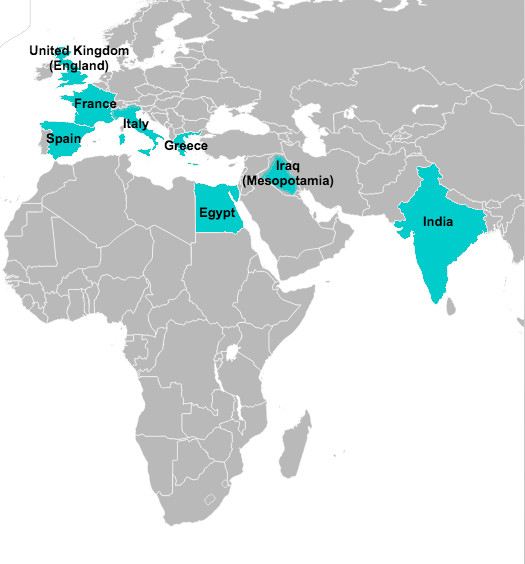 did you know
Tutankhamun was believed to be only nine or ten years old when he assended to the throne in Egypt in 1333 BC during the New Kingdom.

2. WHY IS THIS IMPORTANT?

You may be asking yourself what the value in studying art from thousands of years ago. What is the point? What does it teach us? Why should we care?

In this unit, by studying art from the paleolithic era through about the year 400 AD, you will see how humans have evolved and witness that evolution through the artwork and architecture which they produced. You will be able to see how artistic methods, tools, and medium changed over time periods and regions of the world. You will get an inside glimpse into what daily life may have been like during a specific time and in a specific region, what the culture was like, and what influences religion had on the daily lives of individuals. You will learn what was important to people at that time through the artwork they carefully crafted.

By analyzing these works of art, you will be able to look back in time, and see how life from thousands of years ago has changed, or marvel at how some things may have stayed the same, despite the test of time. Understanding the artwork of this time period is about about truly digging into what that work of art stands for and what it tells us about the culture from which it came. Who we are as human beings now is a result of who we were in the past. By studying that past, we gain understanding of where we came from.

think about it
As you go through this unit, think about the similarities art today has with art from thousands of years ago. What types of themes are still prevalent in modern art that were central to art of the past?

summary
In this unit, you will explore prehistoric works of art, art from ancient Egypt, art from ancient Greece and the surrounding area, Roman and etruscan art, and art of ancient India. Your journey will take you through about 22,400 years of history and to various parts of the world. All the while, the works of art you study will shed light on the cultures, religions, and daily life in that location and point in time.
Rating
Poor Fair OK Good Great
© 2020 SOPHIA Learning, LLC. SOPHIA is a registered trademark of SOPHIA Learning, LLC.