Or
Close Popup
+
2 Tutorials that teach Interest Rates
Take your pick:
Previous Next

Determine the effects of interest rates on the economy.

Tutorial
what's covered
This tutorial will cover the topic of interest rates, focusing on how the government finances expansionary fiscal policy and how deficits incurred as a result can impact interest rates in an economy.

As a reminder, fiscal policy is typically policy set by a central government authority, whereby spending by the government is adjusted to stabilize economic activity.

We know that the government actually has two tools: spending and taxation. Fiscal policy, then, focuses on the policies in these two areas. The goal is for the government to use these two tools to stabilize our economy's movement through business cycles.

It is important to note, though, that there are short-term and long-term goals of fiscal policy.

In the short-term, the goals of fiscal policy are full employment and price stability. The government will use taxation and spending to stabilize the economy when either unemployment or inflation rises.

In the long term, though, the goal of fiscal policy is to ensure economic growth, which is the measure of change in real GDP over periods of time. It is usually expressed as a percent change in the value of the sum of goods and services produced in a country's natural borders over a specified time interval.

Typically policy set by a central government authority, whereby spending by the government is adjusted to stabilize economic activity

Measure of the change in real GDP over periods of time; percent change in value of the sum of goods and services produced in a country’s natural borders over a specified time interval

Without increasing taxes--because if taxes increase to finance expansionary fiscal policy, this takes money away from people and is thus counterproductive--the government must borrow money by selling Treasury securities to finance the increased government spending needed to stimulate the economy.

Therefore, the government takes on debt.

To increase demand and stimulate the economy in the short term, the government must spend more money than they collect in tax revenue. They must either increase their government spending or collect fewer taxes, or both, to pump money into the economy and get people spending again.

When these government expenditures exceed tax revenue--which is expansionary fiscal policy--this is known as a deficit. Deficits are shortages that result from spending in excess of revenue.

When the government borrows money to finance the expansionary policy needed, in the future, they have two options for debt repayment:

Shortages that result from spending in excess of revenue

Let's talk about the second option of debt repayment when the government rolls over their debt and uses new debt to pay off previous debt.

Interest is also a return on investment, where return varies based on the risk profile of the investment, time horizon, or opportunity cost of a comparable risk-free investment and inflation expectations.

As you can see by definition, there are many different ways that we can look at interest. Today we will focus on how interest is the price or cost of money.

think about it
If you choose to hold your money as cash or if you choose to go out and buy something with it, what is your opportunity cost of that decision? Well, you are sacrificing the ability to earn interest on that money. So, this is the first way that we will approach the topic of interest rates.

Now, if we look at the money market and a graph of the supply and demand for money, we place the price of money, or the nominal interest rate, on the y-axis, and the quantity of money on the x-axis.

We assume that the Fed controls the supply of money, so it is fixed, shown as a vertical line. 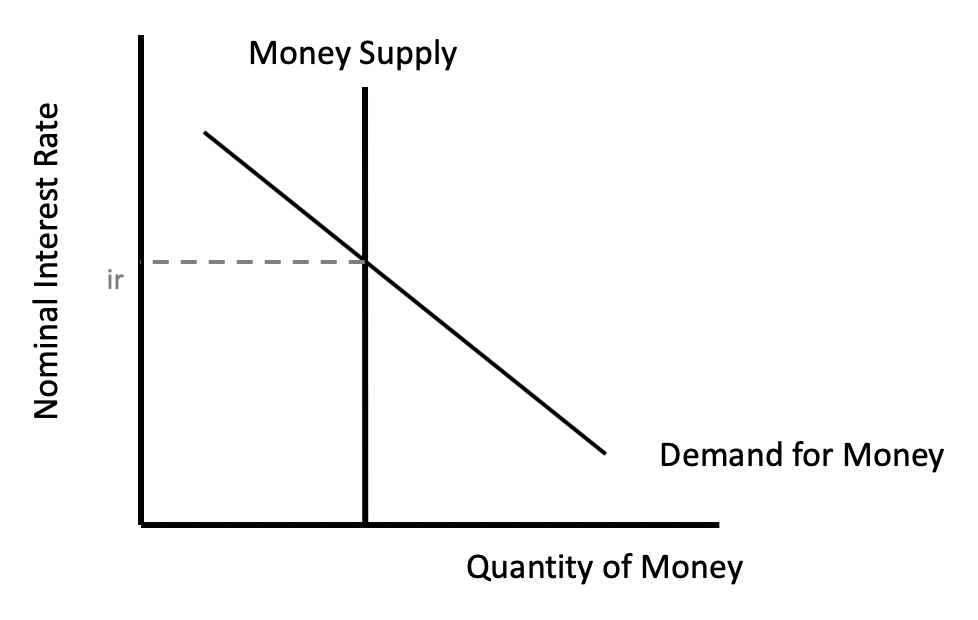 The demand for money, though, does vary with interest rates. When interest rates are higher, you would likely prefer to keep your money in the bank instead of spending it, correct? This is because you are earning a higher interest rate on it. In addition, it is more expensive to take out loans.

As rates fall, it is not worth it to keep it in the bank. Now it is more attractive to take out loans for a home, car, etc., because rates are lower.

4a. Fed's Impact on Interest Rates


These are two graphs that show that the Federal Reserve can have a direct impact on interest rates by changing the money supply, which is what the Fed controls.

The Fed can impact interest rates by changing the money supply through their tools of open market operations, the reserve requirement, and targeting rates.

4b. Government's Impact on Interest Rates

big idea
When the government needs to borrow money to finance expansionary policy, they now enter the private market for loanable funds; they become someone else demanding a loan.

The government is not shifting the money supply as the Fed can. With the government now borrowing money, they become additional demanders for loans in an otherwise private market, and when the demand for loans increases, it drives up interest rates.

It is important to keep in mind that when the government is enacting expansionary fiscal policy, the Fed will often do the same and use expansionary monetary policy by either buying treasuries or targeting lower rates.

When we increase the money supply, you can see the impact on the graph below. 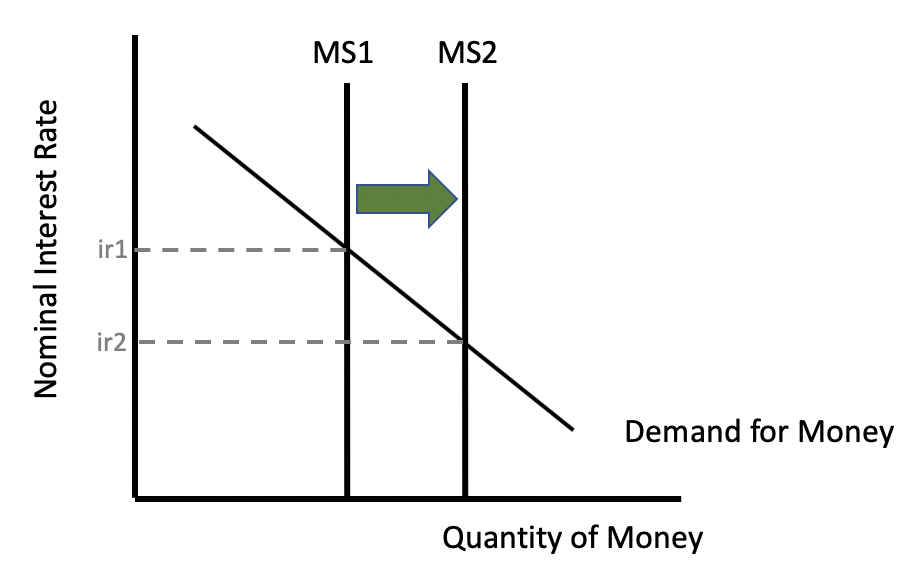 The effect is to drive rates down, which can offset the impact of the government demanding loans if they are also enacting expansionary monetary policy.

During the recession that followed the housing crisis, it might have been expected that rates would skyrocket as the government borrowed huge sums of money to finance expansionary policies during that crisis.

The government wanted to ensure that our economy did not enter another Great Depression.

Even though they did borrow huge sums of money, though, rates actually fell for a couple of years. This was because the Fed also took action and enacted major expansionary monetary policy.

Had the Fed not done this, with the government entering the market for loanable funds, rates would have gone up, but because of the Fed's actions, rates did not rise.

Shortages that result from spending in excess of revenue.

Measure of the change in real GDP over periods of time; percent change in value of the sum of goods and services produced in a country’s natural borders over a specified time interval.

Typically policy set by a central government authority, whereby spending by the government is adjusted to stabilize economic activity.