Determine the vertex and direction of opening of the parabola for a quadratic equation. 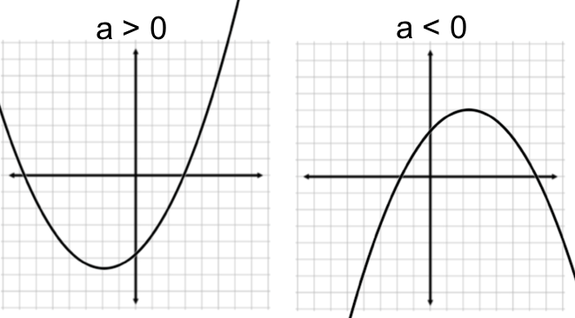 2. The Vertex of a Parabola

Given the shape of a parabola, there will always be either a low point or a high point to the curve. This point is referred to as the parabola's vertex. An interesting characteristic of the vertex is that it lies on an invisible line of symmetry. This means that parabolas are symmetrical - we can imagine reflecting one side of the parabola about the line of reflection, and it will match up with points on the other side. This line of reflection is known as the axis of symmetry to the parabola.

a line of reflection passing through the vertex of a parabola; in up and down parabolas, it is a vertical line. 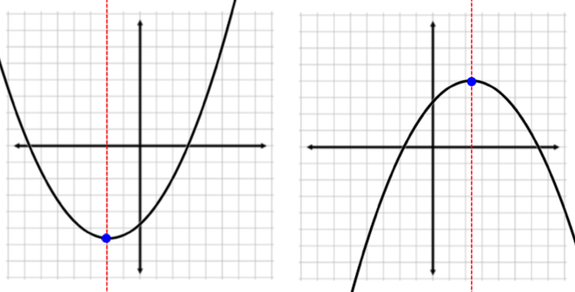 There are a few ways to find the vertex of a parabola from its equation. When the equation of a parabola is given in standard form, we use the values a and b (the coefficients of the x-squared and x-terms) to calculate the x–coordinate of the vertex. This also describes the equation to the axis of symmetry. Here is the formula we use:

Once we find the value for x, we plug that into the equation and find the associated y-value. This gives us the coordinates of the parabola's vertex.

is located at the point

3. Vertex Form of a Quadratic Equation

Finding the coordinates to a parabola's vertex is much easier if the equation in given in a different format, specifically the vertex form.

We don't call it vertex form for nothing. The variables h and k represent the x– and y–coordinates of the vertex. So there is virtually no calculations needed in order to identify the vertex. The only tricky thing is to remember that in general, there is a minus sign between x and h, so we need to be mindful of the sign.

It is easy to mistake the sign of h when finding the x–coordinate of the vertex. Because the general formula subtracts h from x, if we see a plus sign in the specific equation, our h value is actually negative.

summary
A quadratic equation can either be an upwards or downwards parabola. If the x-squared coefficient in a quadratic equation is positive, the graph of the equation parabola will be pointing up. If the x-squared coefficient is negative, the parabola will be pointing down. The vertex of a parabola is either the low point or the high point to the curve. The axis of symmetry acts as a line of reflection, so all points on the left of the parabola can be reflected across the axis of symmetry to represent all points to the right and vice versa. With the vertex form of a quadratic equation, the variable h and k represent the x- and y-coordinates of the vertex.
Terms to Know

a line of reflection passing through the vertex of a parabola; in up and down parabolas, it is a vertical line.