Identify the relationship between philosophical inquiry and empirical observation.

(more)
See More
Tutorial
what's covered
In this tutorial we will explore the nature of philosophy by contrasting the type of inquiry that is characteristic of philosophy with inquiry typical of other disciplines and ways of thinking. Our discussion will break down like this:

1. Philosophy and the Limits of the Senses

Philosophy comes from the Greek terms “philo” and “sophia.” Philo means love, and sophia means wisdom. To love wisdom is more than simply loving knowledge. You could love knowledge so much that you collect a mass of information. But without inquiring for yourself whether this knowledge is true or not, you have failed to love wisdom.

If you read that ants have six legs, you could go into your garden, catch an ant, and find out for yourself. You would have thus used your senses (e.g. vision) to confirm the claim. This kind of knowledge, produced through verification by the senses, is called empirical knowledge.

The natural sciences have developed methods of observation and experimentation that are very good at discovering empirical truths. But some questions cannot be settled through observation alone.

Imagine you and a friend are watching a debate on the news about whether or not there is a rise in poverty. You might point to an empirical example of poverty in the world to settle it (for instance, you might claim that there is a greater demand for food banks in your region). But your friend may well think that your example doesn’t count as poverty.

You both agree on an empirical fact (food bank usage), but disagree about how we are to understand this fact. It is the concept of poverty itself that needs to be determined so that you can then agree on a correct interpretation of the facts.

In this context we can see that you would need to provide reasons or arguments to answer the question “what is poverty?” For this reason, it is a philosophical question. Once this has been answered, you can return to empirical observation to answer the question “is there poverty?” (i.e. if what you decided counts as poverty, say food bank usage, is actually there in the world). Thus we need both conceptual and empirical inquiries here.

2. Philosophy Beyond the Senses

Philosophy has become especially good at discovering truths that cannot be attained purely through empirical observation. It has done so by developing methods of argumentation and logic.

The pursuit of truths that cannot be wholly determined empirically.

Philosophy’s investigation into the meaning of terms and concepts enables it to inform empirical investigations. For instance, a social scientist may make the following claim: art production has declined in recent years. A philosopher could ask “what is art?”, answering with a broader definition than the social scientist. If the new definition is accepted, the scientist will have to count things as art that she did not before, thus revealing no decline.

The kind of self-knowledge and awareness that philosophy brings, therefore, makes it important for any educated society.

try it
Some of the questions raised during this tutorial, and their associated topics, are presented in the illustration: 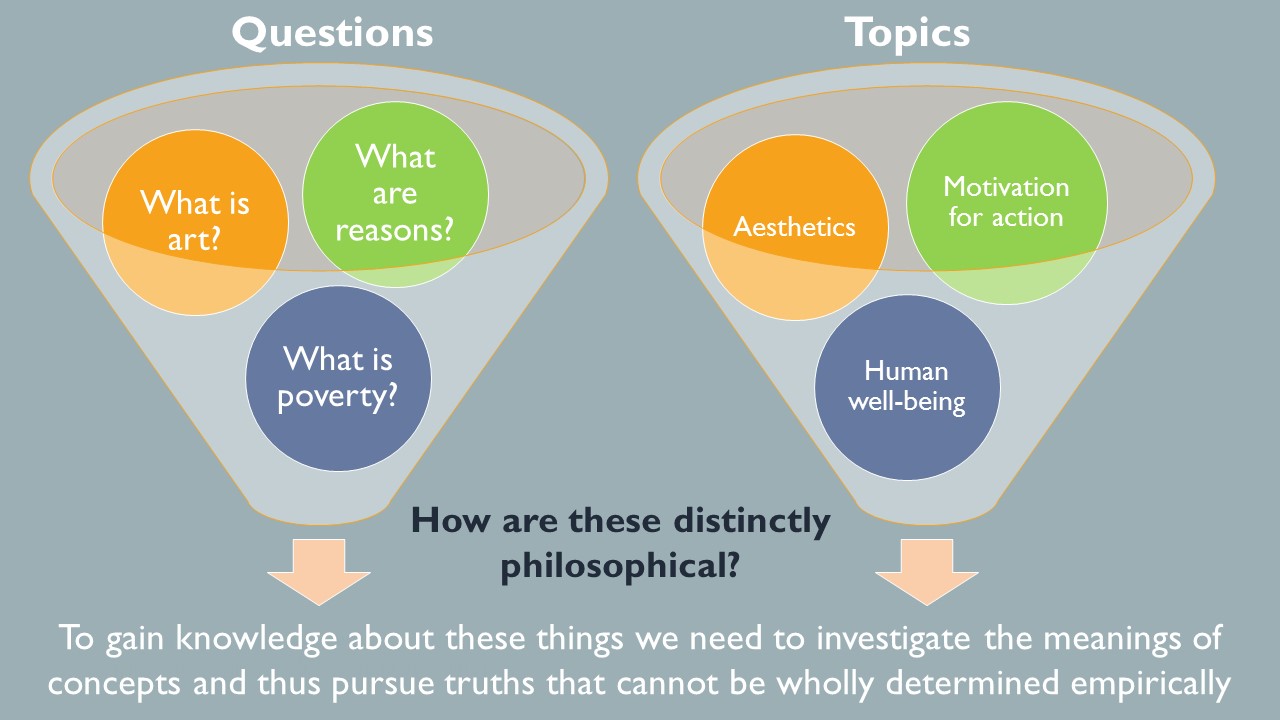 We have already seen that philosophy values argumentative reasoning. Traditionally it has also placed great value on the discipline and responsibility of the person pursuing philosophical inquiry.

It can take a lot of self-control to make sure that your preferences or desires do not influence your reasoning. A judge, for example, will take care to not allow her preconceptions about a defendant cloud her judgment. The defendant’s father, on the other hand, may not be able to stop his belief in his son’s innocence from blinding him to the relevant facts.

think about it
If you want to get to the truth of the matter, is it better to follow your passions or your reason?

Another concern for philosophy is the relationship between our beliefs and our actions. Consider the following actions and how they relate to the belief.

In addition to making our actions consistent with our beliefs, we should also aim to make all our judgments consistent with one another. This would mean applying a standard of evaluation in the same way, in every case. If you judge a stranger severely for dropping litter on the street, but do not feel bad doing so yourself, you would be making yourself an exception from the standard of evaluation.

did you know
This is often referred to as using a “double standard”. That is, when you use a standard rigorously in one case (e.g. the stranger littering) and leniently in another (e.g. your own littering), you are using it in two different ways—in a “double” way, as it were.

By contrast, imagine applying the standard consistently. If you believed that people should give up their seat on the bus for those less mobile than themselves, then you would allow an elderly man to take your seat if there were no others available.

While philosophers search for truth, others would rather spare themselves the effort of inquiry, choosing instead to hold on to the opinions they have. If you held onto your beliefs without questioning them, you would be a dogmatist. Philosophy, on the other hand, will not accept the authority of ideas if there is no support for them.

Philosophy also resists authority by encouraging others to pursue truth for themselves. In contrast to this imagine someone wants to make sure you accept their idea as true. The last thing they would want you to do would be to question things for yourself. Instead, they might choose their words carefully so that their ideas seem more attractive to you.

If you happened to be easily impressed by technical terms, and a politician knew this about you, she might try to persuade you to vote for her party by presenting her economic policy in overly complex ways.

Knowing about an audience and modifying your communication to appeal to that audience in order to persuade them of something is often referred to as an exercise of rhetoric.

Because of its commitment to inquiry and its rejections of unjustified claims, philosophy departs from dogmatism and rhetoric as described here.

summary
We discussed philosophy and the limit of the senses by showing how empirical observation is limited to answering questions that can be verified by the senses. We saw that questions about the meaning of concepts requires the pursuit of philosophy beyond the senses; that is, the pursuit of reasoning and argumentation.

Many philosophical values were explored including: dispassionateness, consistency of action and belief, and consistent application of standards of judgment. Finally, philosophy, dogmatism, and rhetoric were distinguished in terms of different approaches to inquiry and communication.
Terms to Know

The pursuit of truths that cannot be wholly determined empirically