Identify a parabola given a vertex and solution set.

A second degree polynomial, with an x-squared term as its highest degree term.

There are several different ways to write a quadratic equation. We are going to cover standard form, vertex form, and factored form:

This is the expanded form of quadratic expressions. There is an x-squared term, an x-term, and a constant term. We use the coefficients a, b, and c, which are the same coefficients used to solve quadratic equations using the quadratic formula.

Vertex form is ideal for graphing quadratic equations, because it provides information about the parabola's vertex readily in its equation. The variables h and k represent the x– and y–coordinates to the vertex. The vertex is the point

Equations in factored form allow us to easily identify the x-intercepts of the parabola, which we will later discuss as solutions to the quadratic equation.

represent x-values at which y is equal to zero.

The shape of a quadratic equation on a graph; it is symmetric at the vertex.

The maximum or minimum point of a parabola located on the axis of symmetry.

Here are a few graphs of parabolas. See if you can spot the vertex, and notice its symmetry: 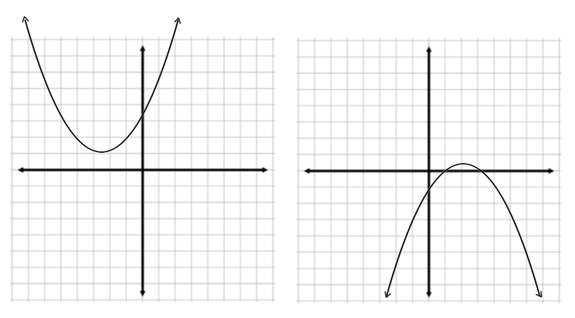 A solution to a quadratic equation is also referred to as a zero, or a root. This is because solutions are x-values that make y equal to zero. Graphically, these are x-intercepts to the parabola. Quadratic equations can have zero, one, or two real solutions. There will never be three real solutions to the equation. This is because parabolas can intersect the x-axis at most 2 times.

There are several different methods to solving a quadratic equation. The most common ways are by using the Zero Factor Property, and using the Quadratic Formula. These methods are covered in greater detail elsewhere, but in general:

the shape of a quadratic equation on a graph; it is symmetric at the vertex

a second degree polynomial, with an x-squared term as its highest degree term

Factored Form of a Quadratic Equation

Standard Form of a Quadratic Equation