Introduction to the Time Value of Money

Recognize the basic concepts associated with the time value of money.

Tutorial
what's covered
In this lesson, you will learn the basic concepts associated with the time value of money. Specifically, this lesson will cover:

1. Defining the Time Value of Money

One of the most fundamental concepts in finance is the time value of money. It states that money today is worth more than money in the future.

Imagine you are lucky enough to have someone come up to you and say, “I want to give you $500. You can either have $500 right now, or I can give you $500 in a year. What would you prefer?” Presumably, you would ask to have the $500 right now. If you took the money now, you could use it to buy a TV. If you chose to take the money in one year, you could still use it to buy the same TV, but there is a cost. The TV might not be for sale, inflation may mean that the TV now costs $600, or simply, you would have to wait a year to do so and should be paid for having to wait. Since there’s no cost to taking the money now, you might as well take it.

There is some value, however, that you could be paid in one year that would be worth the same to you as $500 today. Suppose it’s $550; you are completely indifferent between taking $500 today and $550 next year, because even if you had to wait a year to get your money, you think $50 is worth the wait.

In finance, there are special names for each of these numbers to help ensure that everyone is talking about the same thing.

All four of the variables (PV, FV, r, and t) are tied together in the equation below.

big idea
Simple interest is when interest is only paid on the amount you originally invested (the principal). You don’t earn interest on interest you previously earned. Don’t worry if this seems confusing; the concept will be explored in more depth later.

2. The Importance of the Time Value of Money

The time value of money is integral to making the best use of a financial player’s limited funds.

The time value of money is a concept integral to all parts of business. A business does not want to know just what an investment is worth today; ­it wants to know the total value of the investment. What is the investment worth in total?

Let’s take a look at a couple of examples.

By figuring out how much option 2 is worth today (through a process called discounting), you’ll be able to make an apples-to-apples comparison between the two options. If option 2 turns out to be worth less than $5,000,000 today, you should choose option 1, or vice versa.

Suppose you go to the bank and deposit $100.

Bank 1 says that if you promise not to withdraw the money for 5 years, they’ll pay you an interest rate of 5% a year. Before you sign up, consider that there is a cost to you for not having access to your money for 5 years. At the end of 5 years, Bank 1 will give you back $128.

But you also know that you can go to Bank 2 and get a guaranteed 6% interest rate, so your money is actually worth 6% a year for every year you don’t have it.

Use the following compounding interest formula to convert the present cash worth into future value using the two different interest rates offered by Banks 1 and 2. 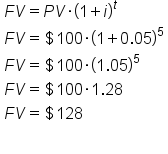 We see that putting our money in Bank 1 gives us roughly $128 in 5 years, while Bank 2’s interest rate gives $134. Between these two options, Bank 2 is the better deal for maximizing future value.

Source: THIS CONTENT HAS BEEN ADAPTED FROM LUMEN LEARNING'S “Introduction to the Time Value of Money” TUTORIAL.