Identify key programs, initiatives, or constituencies of the great society

Tutorial
what's covered
After the passage of the Civil Rights Act of 1964 (and following his victory in the presidential election of 1964), Lyndon B. Johnson worked to implement his vision of a Great Society. In addition to continued federal action on behalf of civil rights, a number of initiatives — to improve education, reform health care, and alleviate poverty — were enacted as a result of the Great Society program. Johnson also secured congressional approval for greater American involvement in Vietnam, which would have important consequences for his domestic agenda.

1. Voting Rights for All

No law is perfect. Despite its significance, the Civil Rights Act of 1964 was flawed by some key omissions.

One of the most important omissions was the Act's lack of protection for African American voting rights. Additionally, three events that occurred in 1964 and 1965 called into question the Great Society program's ability to create true racial equality.

Lyndon Johnson’s plan to eliminate poverty and racial injustice in the United States, and to improve the lives of all Americans

The first of these events was the Mississippi Summer Project of 1964, also known as Freedom Summer.

During the summer of 1964, black and white volunteers from the Student Nonviolent Coordinating Committee (SNCC), and other civil rights organizations, were harassed, beaten, and arrested as they attempted to register black voters in Mississippi. Three civil rights workers — James Chaney, Michael Schwerner, and Andrew Goodman — were killed by the Ku Klux Klan. Other opponents of black voter registration burned or destroyed approximately three dozen homes, churches, and other buildings owned by or affiliated with civil rights activists in Mississippi.

The events of Freedom Summer led to the formation of the Mississippi Freedom Democratic Party (MFDP). The creation of this party resulted in a confrontation between black political activists and Democratic Party regulars at the 1964 Democratic National Convention in Atlantic City, New Jersey.

During the summer of 1964, Fannie Lou Hamer, Ella Baker, Robert Parris Moses, and other Mississippi civil rights activists campaigned across the state to win the seats of the all-white Mississippi Democratic Party at the 1964 Democratic National Convention, scheduled to take place in August. Lyndon Johnson, along with Democratic Party leaders, worried that seating the MFDP delegates at the convention would cause southern white Democrats to walk out.

Convention organizers attempted to compromise with the MFDP by proposing to seat two of its delegates as nonvoting observers. The MFDP rejected the proposal, and questioned Johnson’s commitment to civil rights. White Democratic delegates from Mississippi were offended that the Party had been willing to negotiate with the MFDP, and left the convention. Johnson’s Republican opponent, Barry Goldwater, won Mississippi and several other southern states, indicating that white Democrats were frustrated by their Party’s civil rights initiatives and were willing to leave it to support Republican candidates.

The third event occurred in March of 1965, when Martin Luther King, Jr. and the Southern Christian Leadership Conference (SCLC) — an organization of black church leaders in the South at the vanguard of the civil rights movement — began a voter registration campaign in Selma, Alabama.

The campaign to register black voters in Selma met strong white resistance, most notably on March 7, 1965, a day later known as “Bloody Sunday”.

The violent suppression of a civil rights march in Selma, Alabama, by state and local law enforcement

As approximately 600 civil rights activists crossed the Edmund Pettus Bridge, they encountered local and state police who used tear gas against the marchers and beat them. Images of the brutal behavior of the police appeared on television screens throughout the nation, and compelled the President to respond. 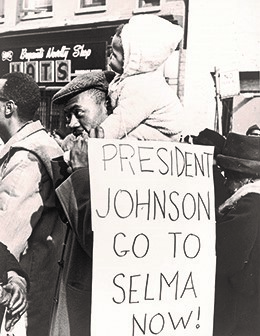 Disturbed by the violence (and the refusal of Alabama Governor George Wallace to stop it), Johnson spoke to a joint session of Congress about the situation, and introduced a bill that would remove obstacles to black voter registration. On August 6, 1965, he signed the Voting Rights Act into law.

The Voting Rights Act banned literacy tests and other barriers that had prevented African Americans from voting in the South. It also empowered federal officials to register voters, and to oversee elections, at the local, state, and federal level.

did you know
The Twenty-Fourth Amendment, which prohibits the imposition of poll taxes on voters, was ratified in January of 1964.

Following the passage of the Voting Rights Act, a quarter of a million African Americans registered to vote. By 1967, the majority of eligible African Americans had done so. In some areas, black votes led to the defeat of county sheriffs, state legislators, and other officeholders who had benefited from segregation and restriction of black voting rights.

Together, civil and voting rights were one of the components of President Johnson’s Great Society. The program also included initiatives in three other major areas:

Unlike John F. Kennedy, who came from a rich and powerful family, Lyndon B. Johnson grew up in the hill country of south-central Texas. For a brief time during the 1930s, Johnson taught at a school where his pupils were poor white and Mexican students. The experience led him to realize that poverty was often the result of a lack of education. As President, he made sure that education reform was a pillar of the Great Society program.

The Elementary and Secondary Education Act of 1965 was one of the most important laws that Congress passed to achieve Johnson’s educational goals. 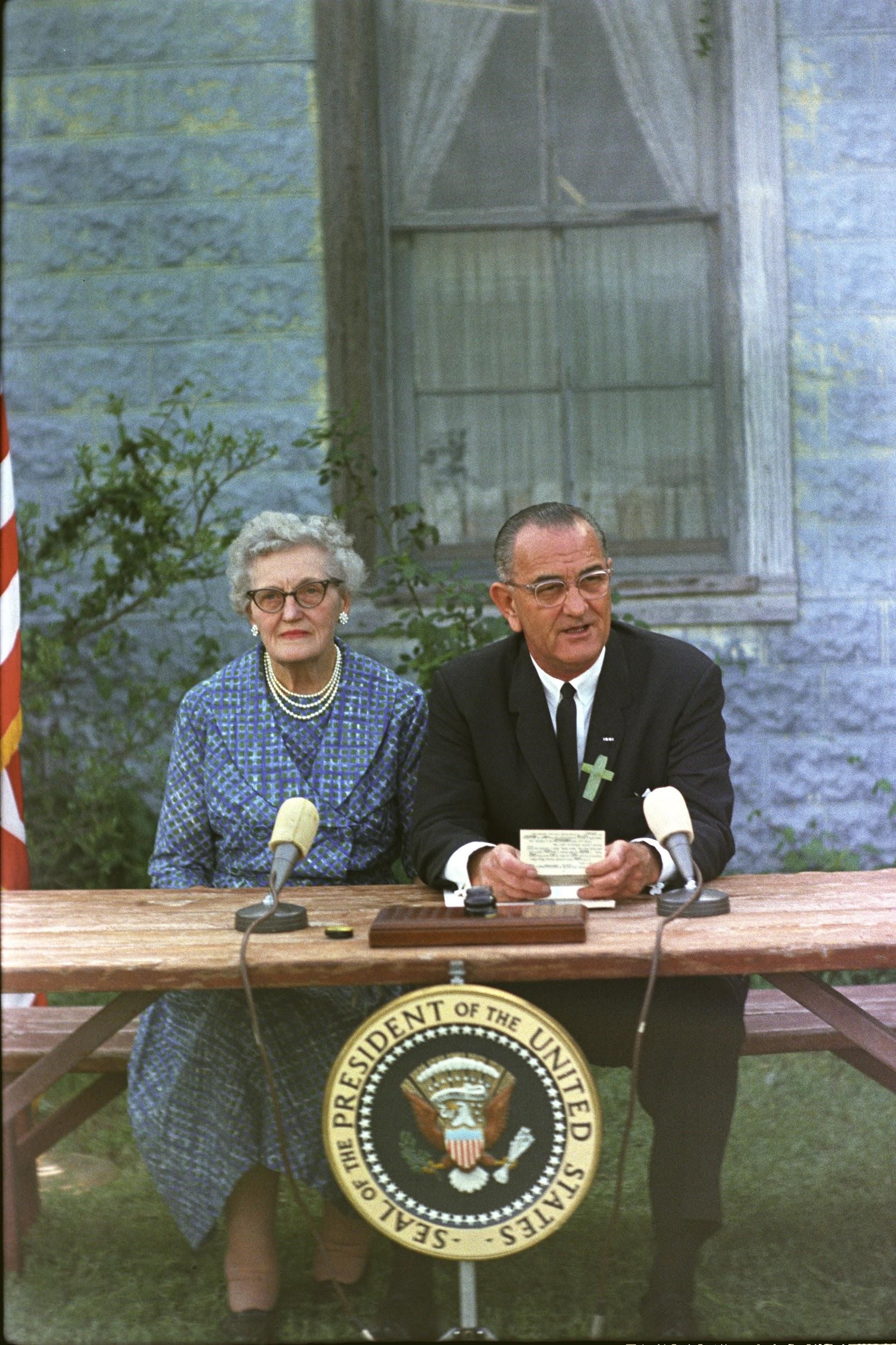 In addition to his efforts to improve education, Johnson addressed the needs of the elderly, who were among the poorest and most vulnerable citizens in the U.S. His administration created the Medicare program in 1965.

A federal health insurance program for people over 65

Before Medicare was implemented, more than half of Americans over the age of 65 did not have health insurance.

The administration also implemented the Medicaid program in 1965 to provide health coverage to low-income citizens, including the disabled and single mothers with dependent children.

Medicare helped senior citizens to access health care services that they might not have been able to afford otherwise. Similarly, when Medicaid became available, it enabled many low-income people to go to the doctor for the first time.

Educational reforms and Medicaid can also be considered as part of the third component of the Great Society program: the War on Poverty.

The Johnson administration’s plan to end poverty in the U.S. through the extension of federal benefits, job training programs, and funding for community development

Some facets of the War on Poverty, such as food stamps and rent subsidies for those living in public housing, provided direct aid to the poor. However, most War on Poverty programs focused on empowering low-income Americans with skills and opportunities to lift themselves out of poverty. 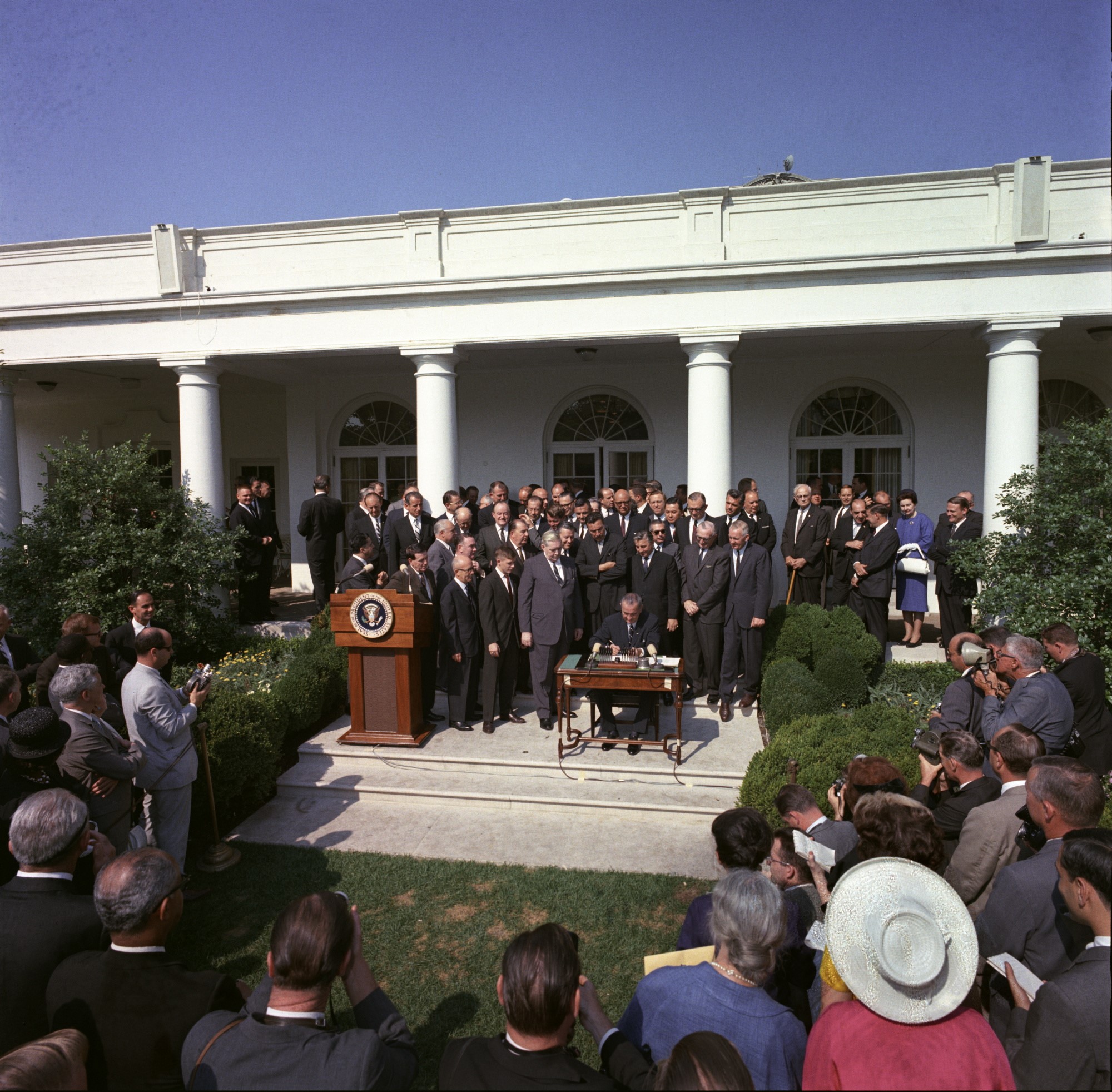 The Office of Economic Opportunity (OEO) administered and managed programs that included the following:

make the connection
One of the best-known programs of the War on Poverty is Head Start, which provides early education and other services for low-income families with young children.

big idea
Taken together, the programs and initiatives of the Great Society were a significant expansion of the welfare state. In some instances (e.g., the movement to secure black voting rights and other civil rights agitation), the expansion was advanced through grassroots activism. Other Great Society reforms (e.g., the War on Poverty), resulted from a combination of federal oversight and local organization. The Medicare program extended federal power to provide for the healthcare needs of the most vulnerable citizens.

In the view of liberal Americans, the federal government had a responsibility to protect individual rights and improve the quality of life for all citizens. The Great Society was evidence that the Johnson administration shared that view.

President Johnson considered the Great Society his first priority. Nevertheless, beginning in the summer of 1964, the administration made a series of decisions that increased American involvement in South Vietnam.

On August 2nd, while gathering intelligence in the Gulf of Tonkin (off the coast of Vietnam), the destroyer USS Maddox reported an attack by North Vietnamese torpedo boats. Two days later, on August 4th, the Maddox reported another attack. A second ship, the USS Turner Joy, also reported that it also had been fired upon.

did you know
The North Vietnamese vehemently denied the second attack. The National Security Agency has since revealed that the alleged attacks on August 4th never occurred.

Relying on the information available to him, Johnson told Congress and the American people that U.S. ships had been attacked. On August 7, 1964, Congress issued the Gulf of Tonkin Resolution.

The House of Representatives approved the Gulf of Tonkin Resolution unanimously, and only two members of the Senate voted against it.

The resolution dramatically increased the war-making powers of the executive branch. It officially changed the American role in Vietnam from advisor to combatant.

For the next three years, Johnson’s efforts to create a Great Society were hindered by growing involvement in Vietnam. Throughout this period, he was unwilling to de-escalate the conflict, or to withdraw forces from Vietnam, fearing that his political opponents would paint him as “soft” on communism. Like President Truman, another liberal who sought to implement a domestic reform agenda, the demands of containment and conformity forced Johnson to pursue a firm foreign policy.

200,000 U.S. military personnel, including combat troops, were initially sent to South Vietnam. By 1968, more than half a million Americans were fighting in the Vietnam War. Money that could have been spent on Great Society programs instead funded the war effort. Increased military spending, combined with Johnson’s refusal to raise taxes or cut domestic spending, contributed to a growing federal deficit.

did you know
Large-scale U.S. bombing of North Vietnam began in 1965. Military spending increased significantly after Johnson’s decision to escalate the war, from $49.6 billion in 1965 to $80.5 billion in 1968.

summary
The Great Society was the largest expansion of the American welfare state since the New Deal. Unlike the New Deal, which was instigated by a severe economic crisis, Johnson's plans to invest in education, support the arts, and provide security for the poor and the elderly were a product of prosperity, optimism, and confidence in the government's ability to solve problems. Continuing agitation by civil rights activists increased the federal government's responsiveness to voting rights and equal protection issues. Johnson’s determination to honor and expand American commitments in Vietnam reduced the administration's ability to realize the goals of the Great Society, and polarized American society.

a 1964 civil rights campaign launched to register as many African-American voters as possible in Mississippi.

Lyndon Johnson’s plan to eliminate poverty and racial injustice in the United States and to improve the lives of all Americans.

gave President Johnson the authority to use military force in Vietnam without asking Congress for a declaration of war.

a federal health insurance program for those over sixty-five.

federal civil rights law that prohibits state and local governments from passing laws that discriminates against voters on the basis of race.

Lyndon Johnson’s plan to end poverty in the Unites States through the extension of federal benefits, job training programs, and funding for community development.

the violent suppression of a civil rights march in Selma, Alabama, by state and local law enforcement.

democratic U.S. president from 1963-1969 whose grandiose domestic agenda for civil rights and economic equality, known as the Great Society, ran up against a growing conflict in Vietnam and an unraveling of the liberal New Deal coalition that supported the Democratic Party.

Baptist preacher, activist, and leader of the civil rights movement whose advocacy of nonviolent protest and civil disobedience characterized the movement for much of the 1950s and early 1960s.