Labor Conflict in the Gilded Age

(more)
See More
Tutorial
what's covered
Capital and labor engaged in a continuous struggle throughout the Gilded Age. Workers were aware of the vast differences between their lives and those of their employers. A handful of wealthy Americans built their fortunes through the labor of American and immigrant workers. This caused labor unions like the Knights of Labor and the American Federation of Labor to grow.

This tutorial examines labor conflict during the Gilded Age in three parts. It also considers the multiple responses to the Haymarket Affair of 1886 — one of the most important and misunderstood labor conflicts in American history.

During the summer of 1877, many Americans were shocked by news of the Great Railroad Strike of 1877.

Following a big pay cut earlier in the year, railroad workers in West Virginia went on strike. They blocked tracks, preventing the trains from running. As word spread, railroad workers across the country left their their jobs to support the West Virginians. They committed acts of vandalism to demonstrate their frustration with railroad owners. 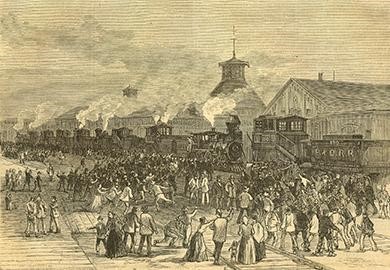 The most violent incident of the strike occurred in Pittsburgh. On July 19th, the Governor of Pennsylvania ordered the state militia to protect property owned by the Pennsylvania Railroad. When they opened fire to disperse an angry crowd, they killed approximately 20 people and wounded about 30 more. A riot erupted and, over the next 24 hours, crowds that sympathized with the strikers destroyed at least 100 locomotives and 2,000 railroad cars.

did you know
By the time the Great Railroad Strike ended, approximately 100 people were dead and $10 million in property had been destroyed.

President Rutherford B. Hayes sent federal troops to Pittsburgh and other major cities to restore order, and to get the trains running again. After 45 days of unrest and violence, the striking railroad workers had accomplished little, and learned that the federal government would use force to protect the interests of capital.

2. To Strike or Not to Strike?

The Great Railroad Strike revealed that workers had few ways to convince employers to listen and respond to their grievances. The most common (and controversial) tactic at their disposal was to strike.

Unions, including the Knights of Labor and the American Federation of Labor (AFL), differed on when to strike, and for what purposes. The Knights of Labor generally disapproved of strikes. They believed that strikes were unfair to employers, and distracted workers from working towards more important economic reforms. The American Federation of Labor approved of striking to gain employers’ recognition of specific issues like better pay, improved working conditions, and shorter hours.

While strikes were sometimes effective, they struck many Americans as evidence of radical labor and political ideologies that had arrived in the U.S. in the late 19th century. Most notable among these were anarchism and socialism.

A political ideology that rejects the wage-labor system, capitalism, and private ownership of the means of production

Both anarchism and socialism originated in Europe. Both rejected the industrial, capitalist system upon which Gilded Age America was based. This led many Americans, including union members, to view them with suspicion.

Conflicts over socioeconomic visions and tactics in the labor movement came to a head in 1886, during an attempt to organize a nationwide strike in support of an eight-hour workday.

On May 1, 1886, labor organizations across the country, including many that were affiliated with the Knights of Labor and the AFL, held a national rally on behalf of the eight-hour workday. Estimates indicate that between 300,000 and 500,000 workers participated in events in New York, Detroit, Chicago, and other cities.

did you know
May Day, or May 1st, which today is internationally recognized as a day to celebrate organized labor, originated in the United States.

At this time, ironworkers were on strike against the McCormick mechanical reaper plant in Chicago. On May 3rd, during May Day celebrations and rallies in support of the eight-hour day, police and ironworkers clashed, leaving four strikers dead. Angry over these deaths, organizers called for a “mass meeting” at Haymarket Square to protest the actions of the police, as indicated in the poster below. 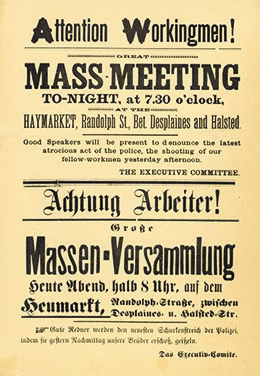 What followed on May 4, 1886, came to be known as the Haymarket Affair.

The rally and subsequent riot in which several policemen were killed when a bomb exploded during an otherwise peaceful workers' rights event in Chicago on May 4, 1886

More than 3,000 people attended the rally. However only 300 or so, including members of a German anarchist group, remained at the end of the event, when police arrived. During one of the final speeches, while police began to order the crowd to disperse, someone threw a bomb into the crowd, killing a policeman. The police opened fire, and chaos ensued. 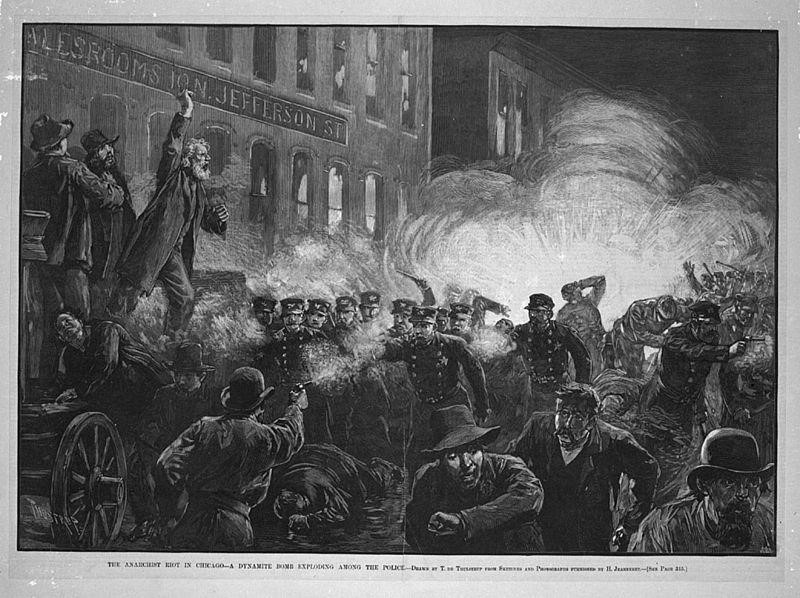 think about it
Compare the image above to the description of what occurred provided in this tutorial. Does the image contain any inaccuracies?

During the Haymarket Affair, eight policemen died and another 60 were injured — by the bomb, or by fellow officers who fired into the crowd. Approximately eight civilians were killed and another 30 to 40 were wounded.

Despite the aggressive actions of the police, public opinion was strongly against the strikers and their supporters. Many were convinced that the bombing was pre-arranged. and that members of the crowd hoped to instigate a fight against the police. According to the following excerpt from a New York Times article, this is what happened when the bomb exploded:

“The [police]men in the centre of the line went down with shrieks and groans, dying together. Then, from the Anarchists on every side, a deadly fire was poured in on the stricken lines of police, and more men fell to the ground...The groans of those hit could be heard above the rattle of the revolvers, as the police answered the fire of the rioters with deadly effect. In two minutes the ground was strewn with wounded men. Then the shots [staggered], and soon all was quiet and the police were masters of the situation.”

This article included several uncorroborated accounts of where the bomb came from. It also referred to those who participated in the event as a “mob”, and identified one of the potential perpetrators as Albert Parsons, who had “a negro wife”. It continued as follows:

“The celerity with which the leaders of the dynamite movement got out of the way as soon as the explosion occurred was little short of marvelous, and this fact led many to believe that they had knowledge of what was to be done and therefore took occasion to escape the consequences they knew would follow.”

think about it
Who is the intended audience for this article? What would they think about its impartiality and accuracy?

make the connection
Think about contemporary debates about the ways in which media outlets control access to information and whether the information is accurate — or fair. Could this debate have occurred in the mid-1880s, regarding the Haymarket Affair? To what extent do bias and selection of sources distort our understanding of events like the Haymarket Affair?

Following the Haymarket affair, policemen raided the offices of unions and anarchist groups and arrested leaders. Eight organizers, including Albert Parsons, were accused of — and tried for — crimes related to the bombing.

did you know
Albert Parsons grew up in Alabama and served in the Confederate Army. He subsequently edited a Republican newspaper in Texas during Reconstruction. Parsons moved to Chicago during the 1870s, fearing violence due to his political views, and because his wife, Lucy Parsons, was black.

Although testimony proved that six of the eight accused were not at Haymarket Square when the bomb was thrown, and the other two were in full view of the speakers’ platform, all eight were convicted of murder. Seven, including Parsons, were sentenced to death.

Like the response to the Great Railroad Strike of 1877, many Americans were unsympathetic toward organized labor and took the exaggerated accounts of the Haymarket Affair at face value. The reaction of police to the incident indicated that government would intervene on behalf of capital in conflicts with labor.

However, the Haymarket Affair also revealed that these conflicts would not stop as long as government and capital continued to ignore labor’s demands. As Albert Parsons wrote in his last letter to his wife, the Haymarket Affair was part of a continuing labor movement in America; one that would never stop trying to eliminate the exploitation and excess of the Gilded Age economy.

“Our verdict this morning cheers the hearts of tyrants throughout the world, and the result will be celebrated by King Capital in its drunken feast of flowing wine from Chicago to St. Petersburg. Nevertheless, our doom to death is the handwriting on the wall, foretelling the downfall of hate, malice, hypocrisy, judicial murder, oppression, and the domination of man over his fellowman. The oppressed of earth are writhing in their legal chains. The giant Labor is awakening. The masses, aroused from their stupor, will snap their petty chains like reeds in the whirlwind….

There was no evidence that any one of the eight doomed men knew of, or advised, or abetted the Haymarket tragedy. But what does that matter? The privileged class demands a victim, and we are offered a sacrifice to appease the hungry yells of an infuriated mob of millionaires who will be contented with nothing less than our lives. Monopoly triumphs! Labor in chains ascends the scaffold for having dared to cry out for liberty and right!....

summary
The Great Railroad Strike of 1877 showed that poor working conditions and pay, combined with few options for relief, could lead workers to protest and commit acts of violence. Many middle and upper class Americans were skeptical toward labor’s demands, and the workers themselves disagreed over the proper means to achieve their goals. Both factors — widespread disapproval of organized labor and divisions within the labor movement — influenced reactions to the Haymarket Affair of 1886. The battle between capital and labor continued, but it seemed like capital was winning.

The rally and subsequent riot in which several policemen were killed when a bomb was thrown at a peaceful workers rights rally in Chicago on May 4, 1886

A political ideology that rejects the wage-labor system, capitalism, and private ownership over the means of production