Or
Close Popup
+
2 Tutorials that teach Laffer Curve
Take your pick:
Previous Next

Interpret the relationship between tax revenue and tax rate on a Laffer curve.

(more)
See More
Tutorial
what's covered
This tutorial will cover the Laffer Curve, including how to interpret it, what it implies about tax rates, and how it is debated among economists.

1. Arthur Laffer and the Laffer Curve

Most people agree that taxation--to some extent--is necessary for the government to be able to accomplish anything.

However, how high should taxes be? How will the government actually maximize the amount of revenue that they collect? Would it be by charging extremely high tax rates or by charging slightly lower rates?

Our income tax rates have varied over the decades. Republicans and Democrats have very different views on taxation.

did you know
At one time, the wealthiest paid over 90% in taxes on their earnings above a certain level.

Arthur Laffer was an American economist who sat on Reagan's Economic Advisory Board.

He became quite famous for what he had to say about the relationship between tax rates and the revenue that the government collects from them.

2. Graphical Depiction of the Laffer Curve

Here is what the Laffer Curve looks like, depicting tax revenue on the y-axis and tax rate--usually expressed as a percentage--on the x-axis. 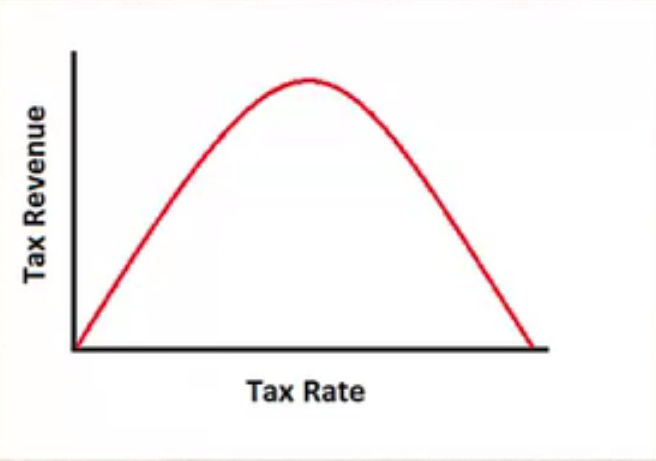 Now, it would be logical that as they begin to raise tax rates, they start generating some amount of tax revenue, so tax revenue will rise.

However, why does it start to fall at some point?

Well, let's go to the other extreme. At a tax rate of 100%, meaning that people did not get to keep any of their money from going to work, the government will also take in no money in tax revenue. This is because people will not work if all their money goes to the government.

At extremely high tax rates, it gives people a disincentive to work. In fact, tax revenue begins to fall off because people are not working as much.

big idea
Tthe idea is that somewhere in the middle--more than likely at some intermediate level of taxes--tax revenue will be the highest.

Now, the specifics of this curve are debated among economists.

This can only be estimated for any given economy in any given time.

So, where is the "ideal" tax rate? Is it somewhere around 35%? A lot of people in our country believe it might be.

Or, is it higher or lower than that? There have been studies that over time this ideal rate has varied widely.

Again, to reiterate the point, the idea is that raising taxes will become counterproductive and result in less revenue because of people's disincentive to work.

As mentioned, this has been debated. Studies have shown that the revenue maximizing tax rates have varied a lot.

Even if economists could agree on exactly what the curve looks like, should we necessarily raise taxes to generate more revenue for the government?

That is certainly not agreed upon by everybody and it is going to depend on a variety of factors, one of which is elasticity.

Graphical representation of the relationship between rates of taxation and government revenue collected.