Analyze primary sources to understand the experience of immigrants.

(more)
See More
Tutorial
what's covered
The cities and industries of the Gilded Age would not have developed without the arrival of immigrants, who came to the U.S. to find work and build new lives. Chinese immigrants began to arrive in the West during the California Gold Rush of the mid-19th century. As steady streams of northern and western Europeans immigrated during the Gilded Age, the number of southern and eastern European immigrants increased.

This tutorial examines immigrant experiences in the late 19th century in four parts. It provides you with an opportunity to learn about the ways in which immigrants adapted to American society, while maintaining their customs and cultures.

1. Immigration as a Global Phenomenon

Immigration is a global phenomenon. It affects countries throughout the world, including the United States. It encompasses the movement of millions of individuals and families.

Between 1840 and 1914, when the First World War erupted in Europe, historians estimate that as many as 40 million people migrated to the United States. They came from everywhere — Asia, Europe, Africa, and Central and South America. They came for a variety of reasons: to escape famine and persecution, and to find a better life in a new country. 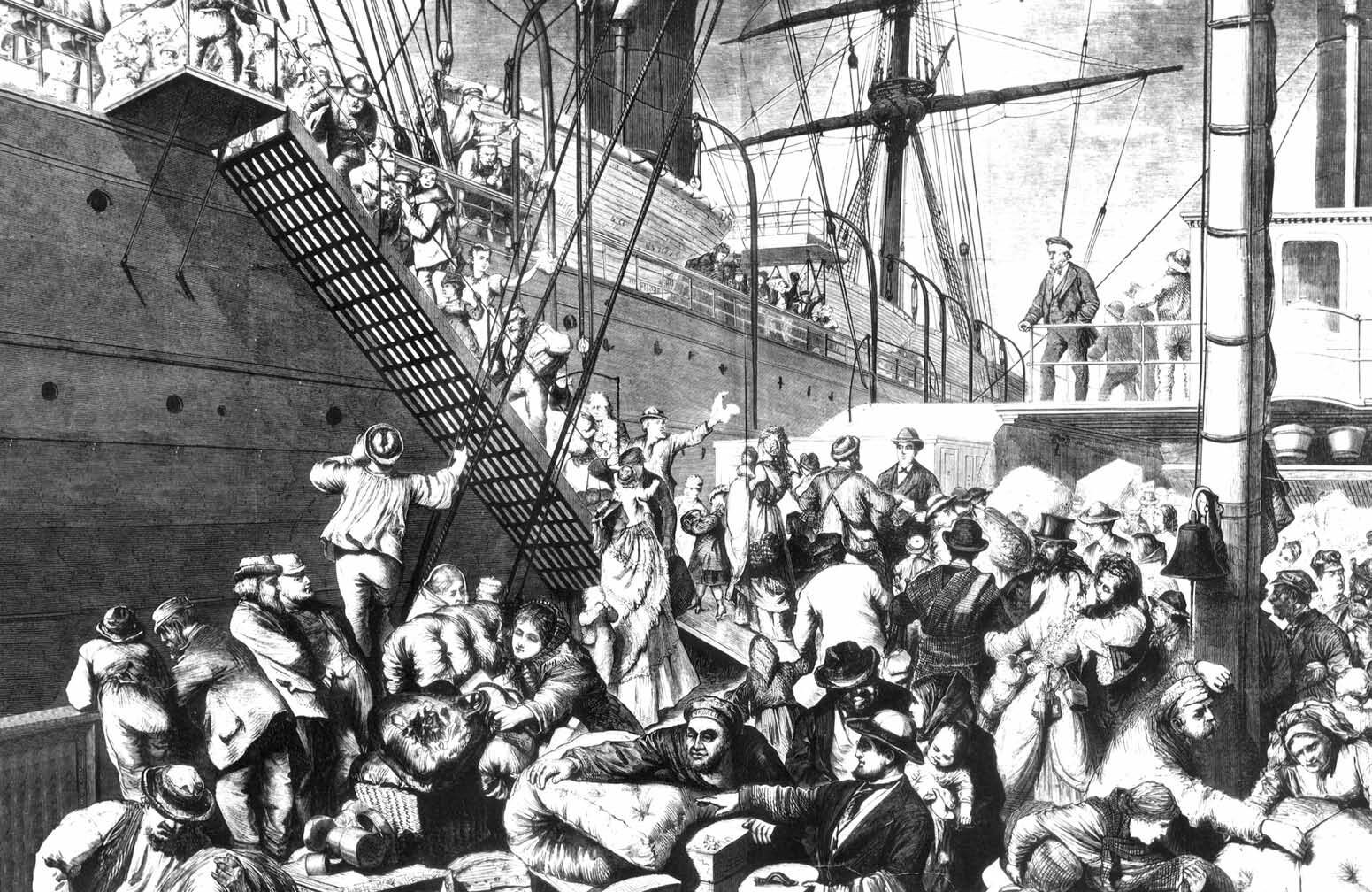 By examining the experiences of immigrants from China and southeastern Europe, you will learn how immigration contributed to the industrialization and urbanization of the United States. You will also see that immigration would not have occurred on the scale that it did without the continued expansion of industries and cities.

Before the late 19th century, the Chinese population in the United States was small. Beginning with the California Gold Rush when, as historian J. S. Holliday wrote, “the world rushed in” to California to strike it rich, Chinese immigrants arrived in greater numbers.

Although some dreamed of finding gold, many Chinese immigrants found work with the Central Pacific Railroad, which was building the western branch of the transcontinental railroad. 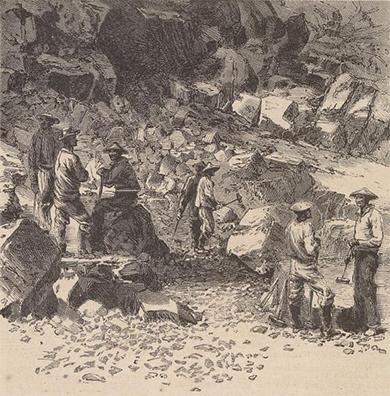 Most of the Chinese who arrived in the United States were men. Few wives or children immigrated.

did you know
In 1890, less than five percent of the Chinese population in the United States was female.

Immigration to the eastern United States took on unique characteristics in the late 19th century. Migrants from northern and western Europe increased throughout the period. Beginning in the 1880s, they were accompanied by an increasing number of immigrants from southern and eastern Europe. 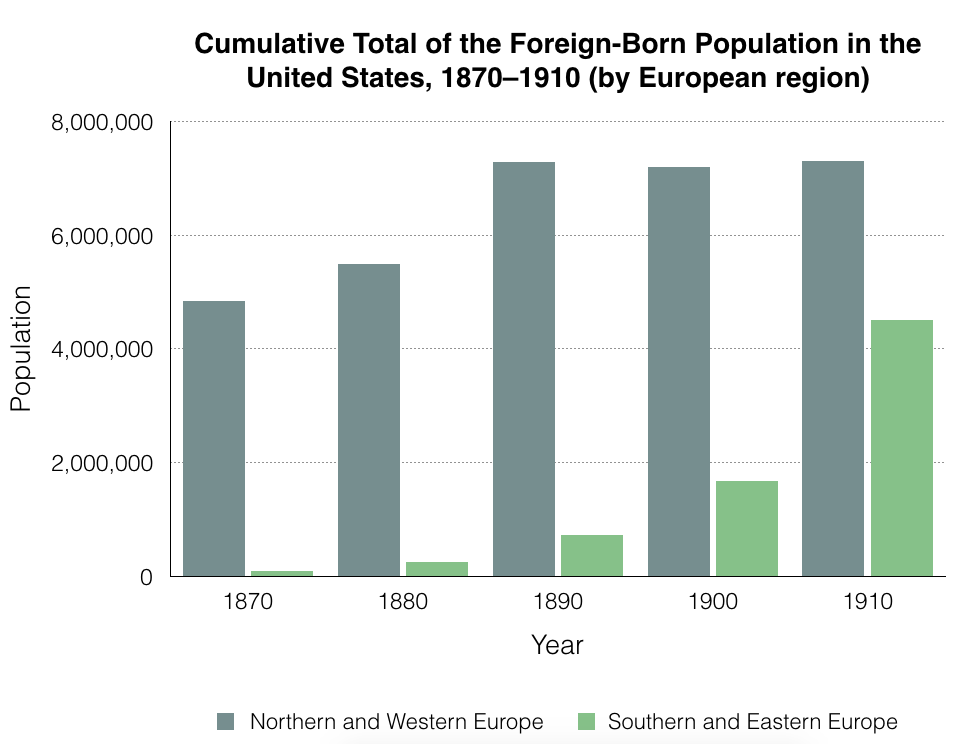 Immigrants from northern and western Europe, particularly Germany, Great Britain, and the Scandinavian nations, often arrived with some money, which many used to move to the western territories. However, immigrants from southern and eastern Europe, including Italy, Greece, and Russia, immigrated due to different “push” and “pull” factors.

U.S. industrial expansion during the late 19th century was a very important “pull” factor. Many immigrants were “pulled” to the United States by the prospect of steady, well-paid industrial work.

did you know
Immigration to the United States was also fueled by the transportation and technological innovations that advanced industry and urbanization. Railroads and steamships made travel cheaper, faster, and more efficient. Immigrants found out about work and living opportunities due to the telegraph and improved mail services.

Whatever their reasons for migrating, many immigrants from southern and eastern Europe arrived in the United States with little education or money. They often settled in the ports where they arrived, most notably New York City. 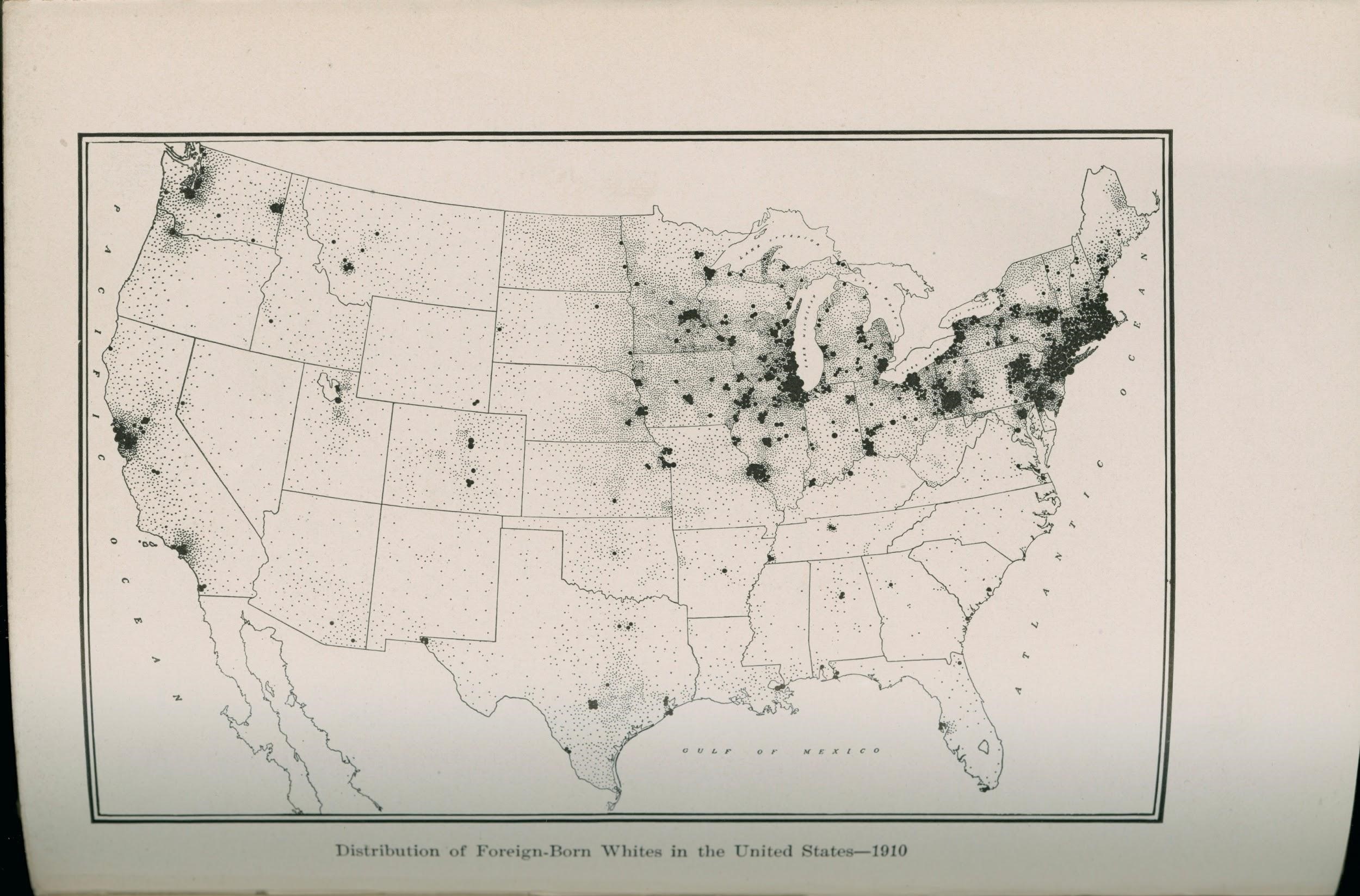 As Chinese workers began competing with white Americans for jobs In California and other western states, those states developed systems of discrimination. At first, the systems were informal.

In the 1870s, groups of white Americans formed “anti-coolie clubs” that boycotted products produced by Chinese workers, and lobbied for immigration restriction laws.

did you know
Coolie was a racial slur directed toward anyone of Asian descent.

Sometimes relations between white and Chinese workers descended into violence.

In Rock Springs, Wyoming, in 1885, tensions between white and Chinese miners erupted in a riot that left over two dozen Chinese immigrants dead and many others injured.

Racism and discrimination against Chinese immigrants found its way into the law.

In 1882, Congress passed the Chinese Exclusion Act, which was the first time that the federal government prevented a specific group of immigrants from entering the country.

The first instance of race-based immigration restriction in the United States; with its passage, Chinese immigration was halted.

The press covered American reactions to Chinese immigration. Political cartoons, including those by Thomas Nast, who sympathized with the Chinese immigrants, put opposing views on display.

Examine the political cartoon by Nast, below, which was published in Harper’s Weekly on February 18, 1871. It was created in response to a bill introduced by “Boss” Tweed and the Tammany Hall political machine that would penalize — via fines or imprisonment — any New York business that hired Chinese instead of white workers. 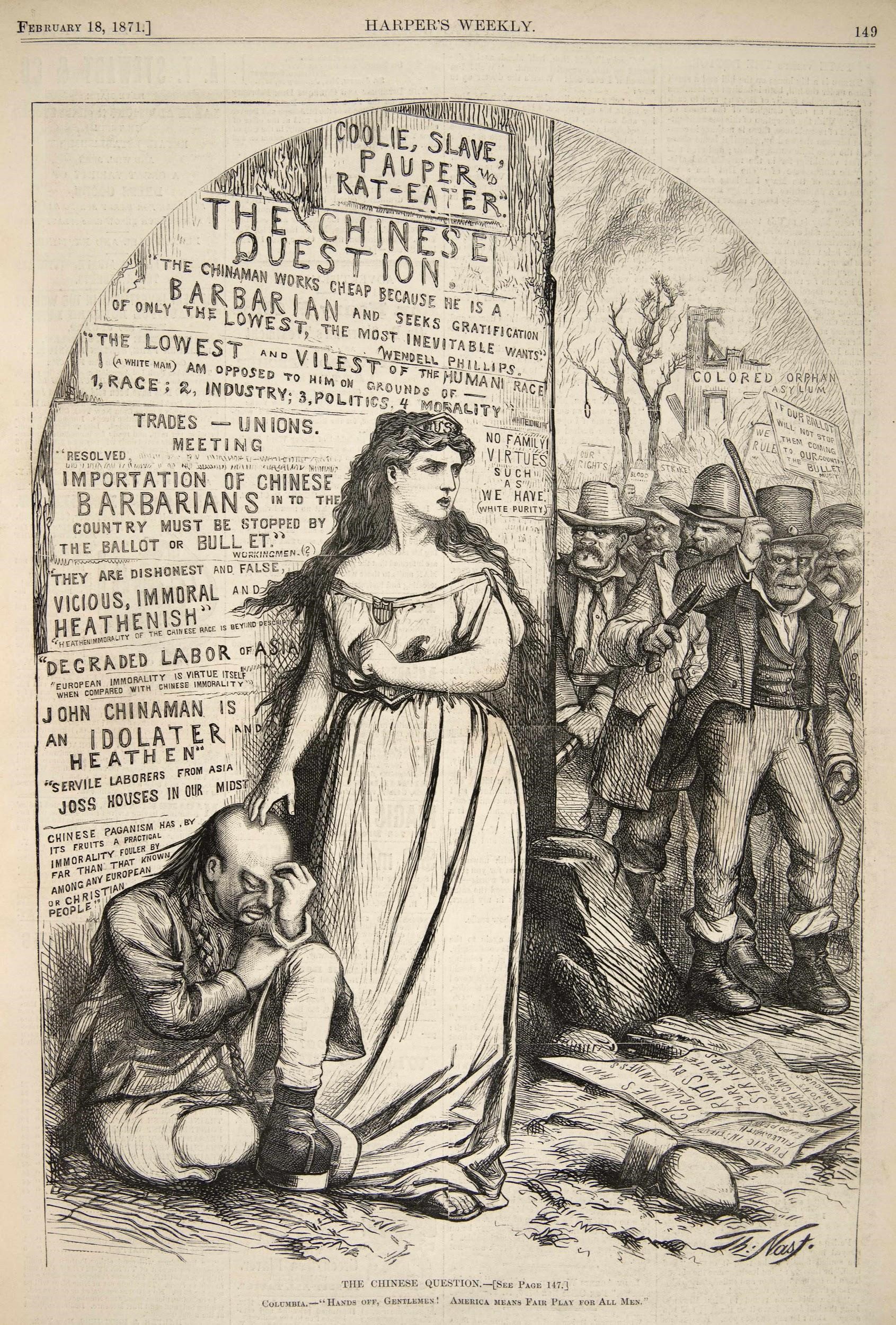 In this image, Columbia (representing the U.S.) protects a Chinese immigrant from an angry mob, comprised mainly of Irish immigrants from New York City. Columbia says, “Hands off, gentlemen! America means fair play for all men.” Plastered on the wall behind her are numerous slogans, newspaper headlines, and quotations indicating the variety of terms used to demean Chinese immigrants and stoke anti-immigrant sentiment.

did you know
If you look closely, you'll notice that the ruins of a "Colored Orphan Asylum" are included in the background of the cartoon (behind the mob of Irish immigrants). This was a reference to the 1863 riots in New York City in which white, predominantly Irish gangs attacked blacks and property owners to protest the Civil War draft. Among the buildings destroyed during those riots was an orphanage for black children.

The history of Chinese immigration to the United States includes much deprivation and hardship. Due to social discrimination and restrictive laws (like the Chinese Exclusion Act), Chinese immigrants turned to their own communities for support. The assistance they found there sometimes included benevolent associations that defended them against legal and workplace discrimination.

In 1891, Congress created the U.S. Bureau of Immigration and, one year later, it opened Ellis Island in New York City as a receiving station for European immigrants.

At Ellis Island, doctors and nurses examined immigrants upon their arrival, looking for signs of infectious disease and other physical and mental ailments. 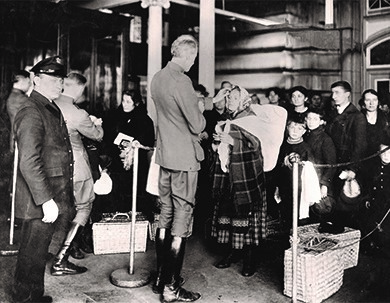 Immigrants from southern and eastern Europe were often unable to speak English. They often sought help from relatives, friends, former neighbors, townspeople, and countrymen who lived in New York and other cities. This led to the formation of ethnic enclaves in many cities. Communities like “Little Italy”, “Chinatown”, and others enabled immigrants to stay connected to their cultures by providing home-language newspapers, ethnic food stores and more. They offered an important sense of community to recent arrivals, but also contributed to congestion and other urban problems, particularly in the slums that provided the only affordable housing available to immigrants.

Many immigrants struggled to establish their personal identities in the United States. Mary Antin, who emigrated from Russia with her Jewish family in 1894 (when she was 13 years old), eloquently described the challenges she faced in her autobiography, The Promised Land (1912).

Antin refers to her arrival in the U.S. as a “second birth.” Her words indicate the break from traditions and customs that immigration required of all immigrants. They also suggest that she could not let go of her past easily. Following is an excerpt from the introduction to her book.

“Happening when it did, the emigration (from Russia) became of the most vital importance to me personally. All of the processes of uprooting, transportation, replanting, acclimatization, and development took place in my own soul. I felt the pang, the fear, the wonder, and the joy of it. I can never forget, for I bear the scars. But I want to forget--sometimes I long to forget. I think I have thoroughly assimilated my past--I have done its bidding--I want now to be of to-day. It is painful to be consciously of two worlds….I am not afraid to live on and on, if only I do not have to remember too much. A long past vividly remembered is like a heavy garment that clings to your limbs when you run. And I have thought of a charm that should release me from the folds of my clinging past. I take the hint from the Ancient Mariner, who told his tale in order to be rid of it. I, too, will tell my tale, for once, and never hark back any more.”

Some native-born Americans expressed concern that immigrants from southern and eastern Europe would hold onto their pasts and, as a result, would not assimilate into American society. Consider the 1891 political cartoon below: 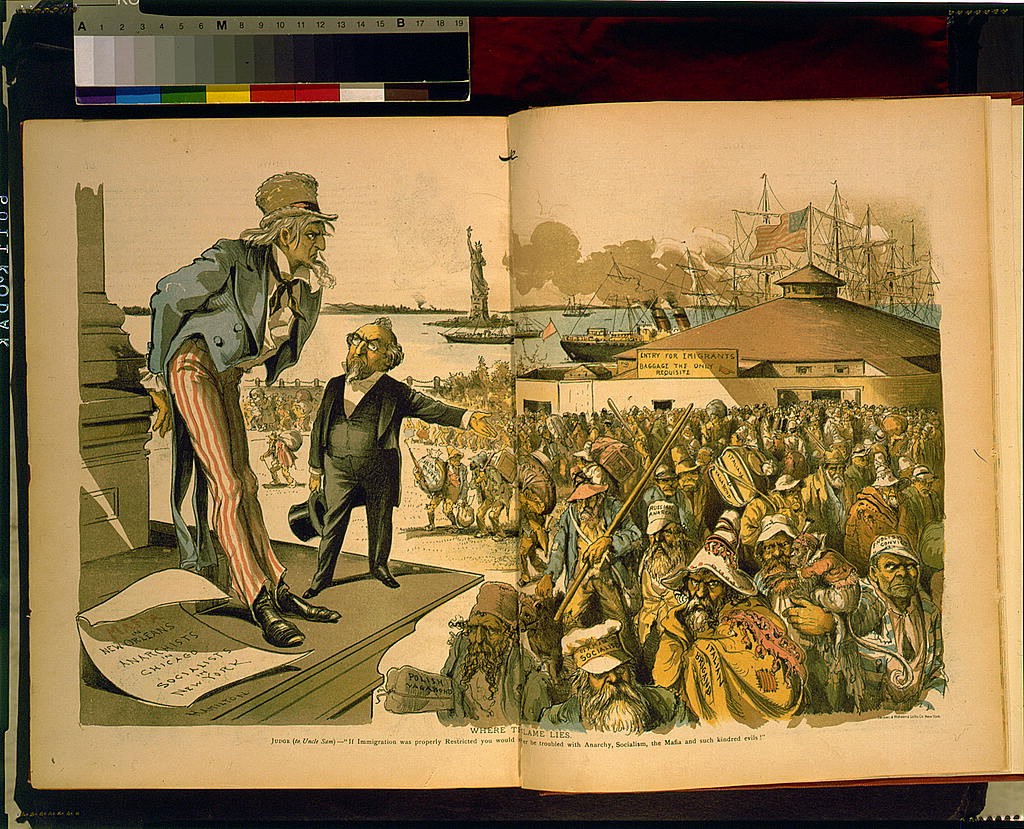 The cartoon shows Uncle Sam (representing the U.S.) and a figure known as "Judge" looking upon a mass of immigrants arriving in the United States. The immigrants are labeled with a number of derogatory titles, including “German socialist”, “Polish vagabond“, and "English convict". Judge tells Uncle Sam, “"If Immigration was properly Restricted you would no longer be troubled with Anarchy, Socialism, the Mafia and such kindred evils!"

Immigrants had much to offer to American industry and city life. Antin’s autobiography reveals that the experience could have a profound impact on one’s identity. Yet the cartoon above shows that a some Americans resented the waves of new immigrants who arrived at the end of the 19th century.

make the connection
In the late 19th century, Americans debated the desirability of admitting large numbers of immigrants, particularly those from Asia and from southern Europe. What similarities do you see in debates over immigration today? What differences?

summary
A combination of “push” and “pull” factors influenced one’s decision to migrate to the United States. Chinese immigrants experienced social and legal discrimination that resulted in the passage of the Chinese Exclusion Act of 1882. With the establishment of Ellis Island in 1891, the federal government increased its oversight of European immigrants. Once immigrants passed inspection on Ellis Island, they often settled in urban ethnic enclaves. Within immigrant communities, people like Mary Antin struggled to hold onto their traditions in a new society. Native-born Americans viewed the arrival of new immigrants with growing concern.