Or
Close Popup
+
1 Tutorials that teach LIKE to Search Data
Take your pick:
Previous Next

Compose a SELECT statement that uses LIKE to search for a specific pattern of text in a column.

(more)
See More
Tutorial
what's covered
This tutorial explores using the LIKE operator within the WHERE clause of a SELECT statement to search specific patterns of text in three parts:

These symbols can be used in combination with one another along with specific characters or numbers. If neither one of these signs is used with a LIKE clause, the LIKE simply would work in the same way as an equal (=) operator. If just a (%) is used in the LIKE clause, it would return all rows of data.

It is important to note that the string text is case sensitive with the content that is not in the wildcards, so the matches will only display if the query entry is the same as what is in the table data.

If we have a string ‘abc’ in a table, the following search terms will return the associated results when compared against 'abc':

As shown above, the % searches for zero, one, or more characters as a replacement. It will be the most common operator used in the LIKE clause. If we wanted to query the customer table and list all of the customers whose name starts with the letter L, we would use the % wildcard after the letter L:

If we wanted to list all of the customers who have their email in the domain gmail.com, we would have the % wildcard operator before @gmail.com:

This will be the most common way to use the % operator to search for content. In the following tutorial, we’ll dive into more complex ways to work with wildcards.

The underscore (_) operator may seem like a simpler version of the % operator, but it matches a single wildcard character, unlike the % that has 0 or more. This allows us to query data to look for a specific length of data. If we wanted to look for customers that have the state starting with C and having two characters, we can do the following:

Another example may be looking for those that live in a country that has three characters and starts with the letter U. If we used the % operator, it would search for 0 or more characters after U:

This would return some extra rows of countries like the United Kingdom:

If we changed it to use the two extra underscores to get 3 characters, it should look like: 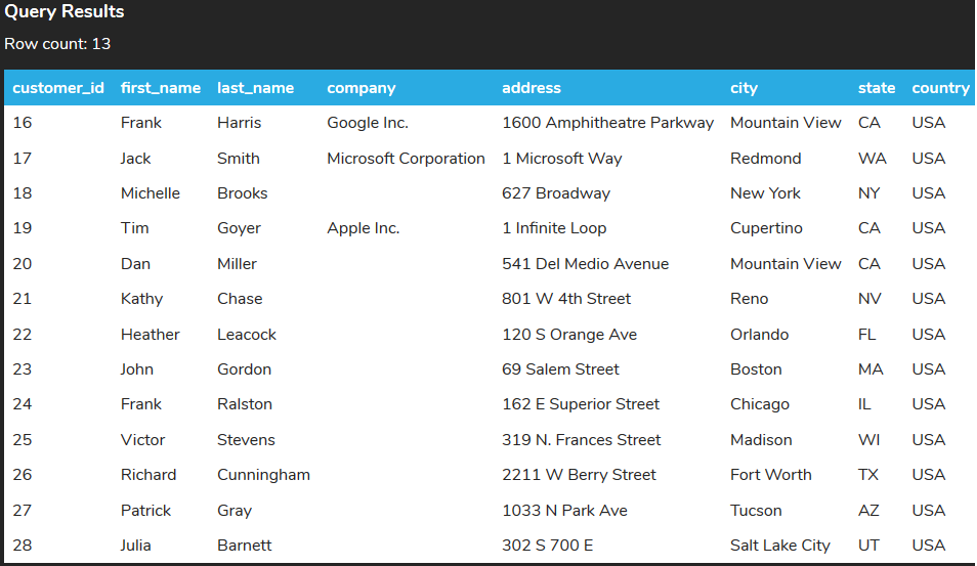 launch database
summary
The LIKE clause allows us to match text strings using the wildcards using the % and _ characters. You can use them in combination with one another to improve searches for specific content.