Recognize the ideas, issues, and effects of westward expansion in the early 19th century.

Tutorial
what's covered
While Alexander Hamilton and many Federalists looked to Europe, specifically Great Britain, as the desired model for American development, others were looking westward.

In this tutorial we’ll examine those who believed that western expansion was a natural right of the United States. But expansion brought with it many questions related to acquisition, administration, and disposal. How the early American government answered these questions had profound implications for the American landscape and the future of the American republic.

Our discussion of “Looking West” breaks down as follows:

1. Origins of the Public Domain

Per the terms of the Treaty of Paris (1783), Great Britain relinquished all of its claims east of the Mississippi River to the United States. However, jurisdiction over this vast territory did not transfer automatically to the national government, which was still under the Articles of Confederation. Rather, many of the states claimed this territory, which contributed to a chaotic situation.

During the colonial period, many of the charters that the English Crown distributed to establish colonies in eastern North America featured land claims that extended all the way to the Pacific.

The colonial charter for Virginia claimed territory in eastern North America and insisted that such claims extended “from Sea to Sea, West and Northwest.”

Throughout the colonial period, colonies competed with each other for these western land claims. Such competition continued even after the United States achieved independence.

did you know
The famous Mason-Dixon line that ultimately came to define the division between the “free North” and the “slave South” by the mid-19th century was originally surveyed in the 1760s in an attempt to mediate conflicting land claims between Pennsylvania, Maryland, and Virginia.

Connecticut used its colonial charter to claim western lands in Pennsylvania and the Ohio River Valley. For this reason, northeast Ohio was originally known as the Western Reserve (see map below). 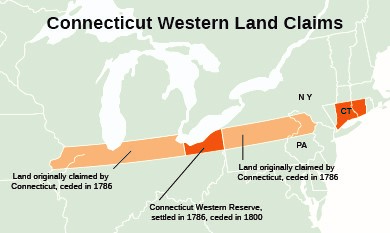 It was within this context that, in 1784, the state of Virginia surrendered its western land claims — which extended throughout the Ohio River Valley and embraced up to 283 million acres according to some estimates — to the national government (see map below). Virginia did so largely out of self-preservation, as it faced a number of problems with its western territory, including:

Under such conditions, Virginia politicians, many of whom originated from elite, tobacco growing, slaveholding families in the eastern part of the state, concluded that they could no longer govern such a large territory and they looked to the national government to resolve the issue. 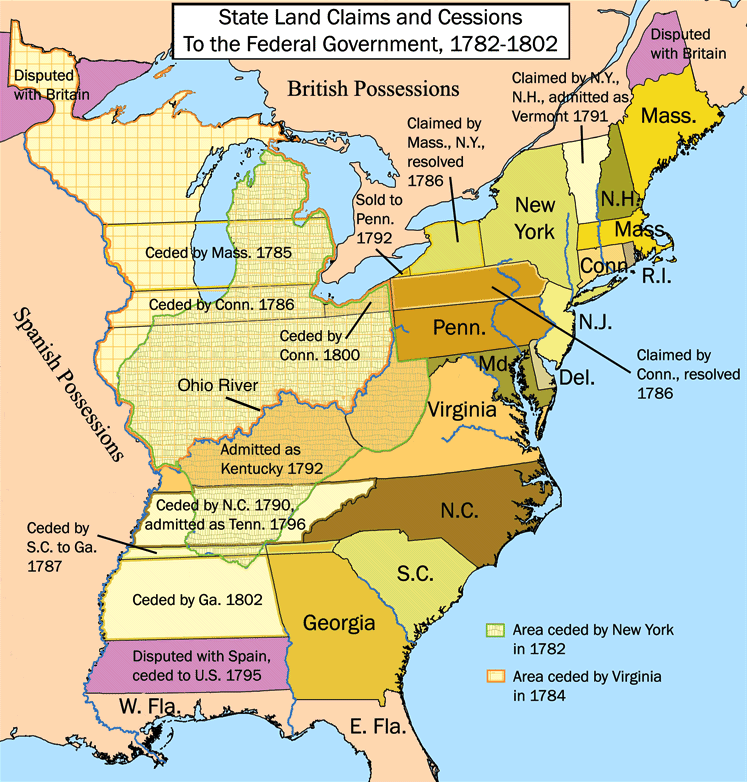 did you know
Other states with western claims, which included Georgia, North Carolina, New York, Massachusetts, and Connecticut, also ceded their western land claims to the national government. Altogether, the cessions amounted to 233.4 million acres, which was slightly larger than the entire area of the original 13 states.

It was in the national government’s attempt to answer the question of what to do with these western lands, that Thomas Jefferson stepped in. Jefferson proposed a series of ordinances that laid the blueprint for western expansion, reinforcing his vision of the West as a land for independent property owners.

Jefferson’s first ordinance, issued in 1784, directed that the western territories would be organized in a manner in which they would create new states, each of which could be admitted to the Union on equal standing with the original states. Jefferson’s next ordinances outlined exactly how this process would occur for the lands north of the Ohio River.

The first initiative, known as the Land Ordinance of 1785, had one primary objective: to transfer western lands into private hands as quickly as possible. To facilitate this process, the ordinance outlined the following procedures:

The Land Ordinance of 1785 was designed to prepare western lands for sale to American citizens, the proceeds from which would raise revenue to boost the nation’s economy.

Proposed the division of western lands into rectangular plots in order to prepare for sale under the direction of the national government.

Meanwhile, the Northwest Ordinance of 1787 provided the foundations for the governance of western lands by organizing all lands north of the Ohio River into a new territory — the Northwest Territory — and providing an orderly method for the creation of new states from this territory:

Organized all lands north of the Ohio River into the Northwest Territory and provided for the orderly creation of new states from this territory.

Together, these ordinances provided the foundations for Jefferson’s vision of the West as an “empire of liberty.” Rather than rule over western lands as a colonial power (much like Great Britain), the United States would admit western territories as states equal to those that originally comprised the United States. For Jefferson, republican governments and western expansion were supposed to go hand in hand. 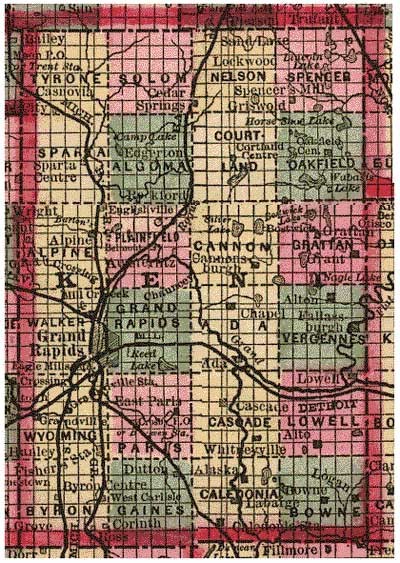 Jefferson continued to look westward even after he became President in 1801. Indeed, he achieved his greatest triumph on behalf of the “empire of liberty” in 1803, when the United States bought the territory of Louisiana from France in a transaction known as the Louisiana Purchase.

The purchase of Louisiana came about largely because of international circumstances beyond Jefferson’s control. Until 1800, Spain had controlled the port of New Orleans and had given the United States the right to traffic goods in the port without paying customs duties. That year, however, the Spanish ceded control of the city (and all of Louisiana) to France, which was now under the control of Napoleon.

Concerned with retaining trading access to New Orleans, Jefferson sent envoys to France. The timing at which Jefferson sent his envoys proved advantageous, however. In 1801, Napoleon had dispatched an enormous army (40,000 troops in all) to retake Haiti. A year later however, when Jefferson’s envoys arrived, Napoleon’s New World army had succumbed to yellow fever and was defeated. Napoleon was now desperate for funds as he prepared for yet another war against Great Britain, and at this point Louisiana appeared disposable.

In early 1803, Napoleon agreed to a deal with the United States. For $15 million, the United States received all of Louisiana. It was perhaps the greatest real estate deal in American history. 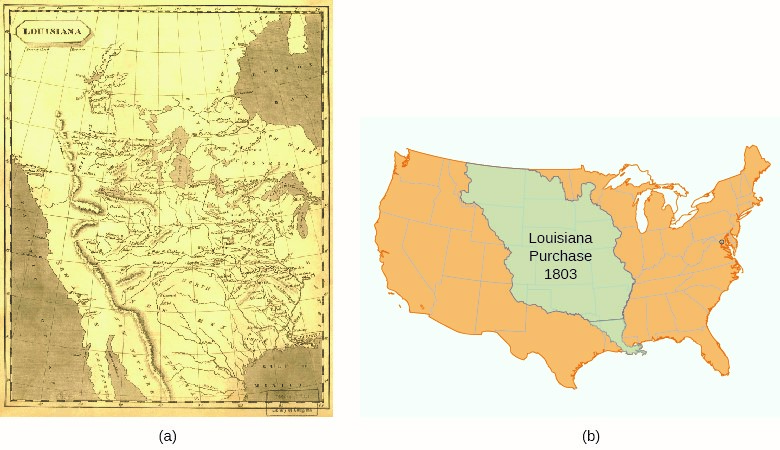 think about it
How does the 1804 version differ from what you know of the geography of the United States and what might be the reasons for the differences?

Jefferson was ecstatic upon hearing the news of the purchase, in large part because it confirmed his hopes that the future of the United States lay westward rather than eastward. Jefferson envisioned the United States as a republic in which farmers — people he had once referred to as “the chosen people of God” — could acquire property (thanks in large part to his land ordinances) and work the land. In addition, by securing the Mississippi River and the port of New Orleans, Jefferson’s Louisiana Purchase provided western farmers with an essential outlet to outside markets. In Jefferson’s mind, farmers would send their produce down the Mississippi River to New Orleans, where it would be sold to American and European traders.

Jefferson always remained optimistic toward western expansion because he believed that, as long as settlers adhered to certain principles, most notably those associated with “life, liberty, and the pursuit of happiness,” they would remain Americans no matter where they lived.

Regardless of Jefferson’s vision of the West as an “empire of liberty,” western expansion posed important challenges for the future of the United States for the following two reasons:

Albert Gallatin, a western land speculator who would ultimately become Thomas Jefferson’s Secretary of the Treasury, commented the following in 1796:

“If the cause of the happiness of this country was examined into, it would be found to arise as much from the great plenty of land in proportion to the inhabitants, which their citizens enjoyed, as from the wisdom of their political institutions.”

think about it
What do you think Gallatin meant by this statement?

summary
Despite its limitations, Jefferson’s vision for an “empire of liberty” represented a profound shift in the national perspective, one in which Americans started to look westward — toward the frontier — rather than eastward as they envisioned the future of the United States. Jefferson provided many Americans with the means to do so. His series of land ordinances created a system through which individuals and companies could purchase land from the national government. They also provided the stipulations through which western territories could enter the Union as states — a true “empire of liberty” in which western expansion, republican governments, and independent landowners went hand in hand. Finally, the Louisiana Purchase provided the United States with ample room to achieve this vision, as well as grapple with its more unsavory characteristics that could prompt division rather than unity.

The Treaty of Paris ends the American Revolution.

Virginia cedes its western land claims to the federal government.

The Land Ordinance of 1785 outlines plans for dividing western lands.