Or
Close Popup
+
2 Tutorials that teach Market Equilibrium
Take your pick:
Previous Next

Determine consumer surplus or producer surplus for a given situation.

(more)
See More
Tutorial
what's covered
This tutorial will cover market equilibrium, focusing on the definition of equilibrium and how to determine equilibrium given a supply and demand schedule. We will also discuss why equilibrium results in the best outcome for society, as well as what happens when there is interference with equilibrium.

We, as consumers, are always searching for what we want at a price that we are willing to pay.

Producers want to provide us with goods at prices we will pay, because that is the only way they will make money.

Equilibrium, then, is where we, as buyers, converge with sellers, or suppliers, in the marketplace.

We, as consumers, want low prices and producers would love to sell at high prices. So, how do we agree on a price?

Let's use an example to explain the answer to this question.

Notice, with the quantity supplied, that at a high price such as $2 for one apple, suppliers are willing to produce a lot because it is worth their time; they can make a big profit if they are able to sell them at that high price.

Conversely, as the price falls, their willingness to produce the apples drops.

This exemplifies that positive relationship between price and quantity supplied.

On the other hand, there is an opposite relationship with price and quantity demanded. No one is willing to buy when each apple costs $2, but as the price drops, the quantity demanded continues to rise.

Let's look at the graph, with price on the y-axis and quantity of apples on the x-axis.

On this graph, then, equilibrium is where supply and demand are equal. It is the same on the chart above--the point at which quantity supplied equals quantity demanded. 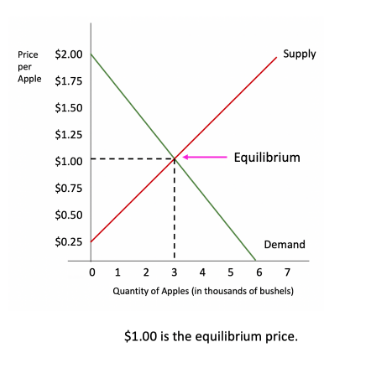 2. Markets Out of Equilibrium

Let's briefly discuss what happens when the market is not in equilibrium.

At prices above $1.00: Qs > Qd
Referencing the chart above, notice that at a price higher than $1--indicated in red--the quantity supplied is greater than the quantity demanded. 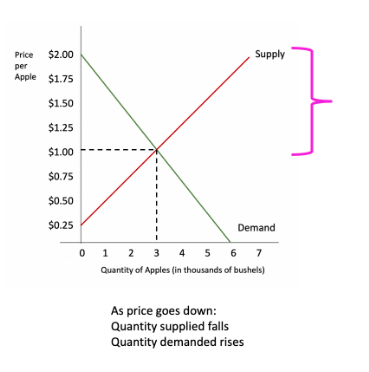 If the price were too high, and producers wanted to sell a lot but no one was buying, they would have an incentive to lower the price.

At prices below $1.00: Qd > Qs
In the opposite situation, if price was lowered to under $1, shown in green, then the quantity demanded exceeds the quantity supplied. 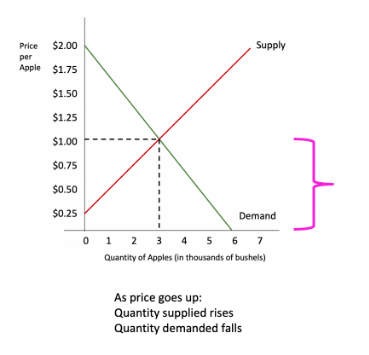 In this manner, the market itself can establish equilibrium, and it does so once there is no tendency for price to go up or down any longer.

In our example, $1 is the equilibrium price because it is the only price where the quantity supplied equals quantity demanded. Therefore, there is no need for price to go up or down any longer.

Now, why is equilibrium such a good thing?

When we equate the two, that means society is best off, because we are equating marginal benefit with marginal cost to society.

This maximizes both consumer and producer surplus, which we will cover next.

Consumer surplus is the difference between actual price paid for a good and the highest amount the consumer would have been willing to pay for that good.

think about it
Have you ever gotten a better deal on something than you expected? What if you were willing to pay $100 to see a concert that you really like, but you were able to buy a ticket from someone for $60. In this case, you would have enjoyed a consumer surplus of $40.

Producer surplus is the difference between actual payment for a good and the least amount a producer would have agreed to receive for the good.

Let's look at these concepts shown visually on a graph, referencing our apple data in the chart above. 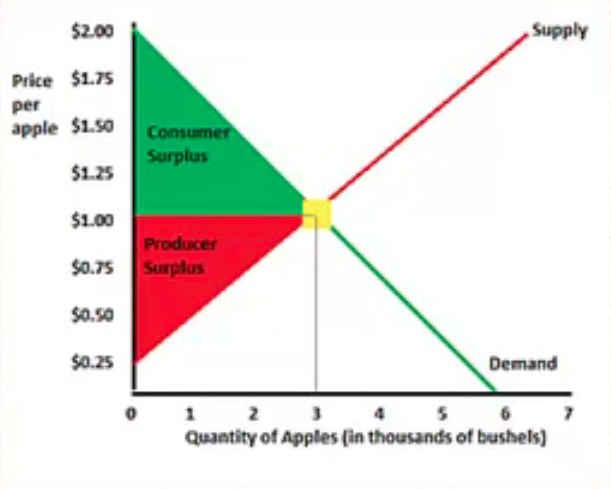 Consumer surplus represents all of the people above the $1 price on the demand curve. They are all willing to pay more than $1, but since $1 is the market price, they enjoy some consumer surplus.

If we add together all of these people and their consumer surpluses, this gives us the green triangle; it is everything above the price up to the demand curve.

Producer surplus represents all of the producers on the supply curve who are willing to sell apples for less than $1, so they enjoy some producer surplus.

Again, when we add them all up, we get the red triangle.

big idea
If we allow the market to establish equilibrium, consumer surplus plus producer surplus represents the overall benefit to society, and that triangle could not get any bigger.

Overall welfare is maximized whenever people can trade freely in the market and equilibrium can be established. The market allows for trade to occur between buyers and sellers, providing opportunities for purchases and sales.

When the market reaches equilibrium, both consumers and producers are better off, and there will be no deadweight loss, which we will discuss in the next section.

Now, what happens when the market cannot establish equilibrium? Let's look at the labor market, which provides a good example of this.

This graph shows the supply of labor, or people willing to supply their labor, and employers who are demanding this labor.

If we let the market come to equilibrium, there would be as many people who want jobs as will be hired for those jobs, which occurs at a market wage rate of $6. 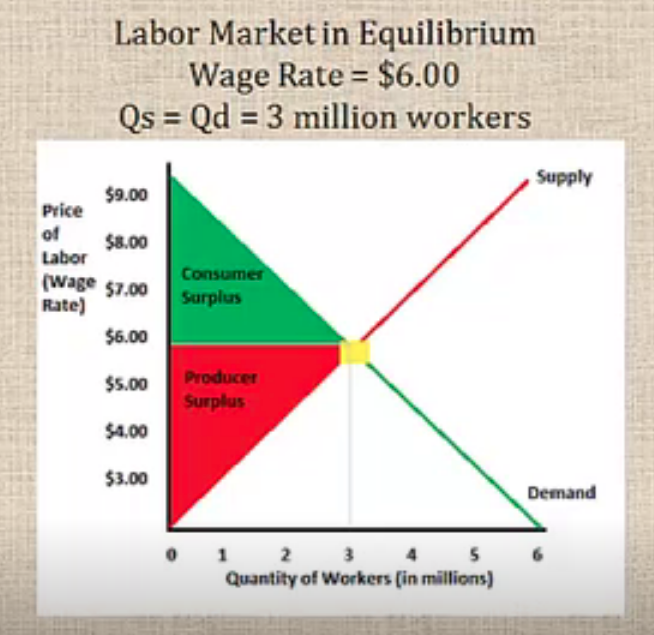 In this scenario, three million workers would want jobs and would get jobs, if $6 was the wage rate.

However, the government does not allow companies to pay workers $6 per hour. There is a minimum wage law in place that prevents the market from establishing equilibrium. Instead, the graph looks like this: 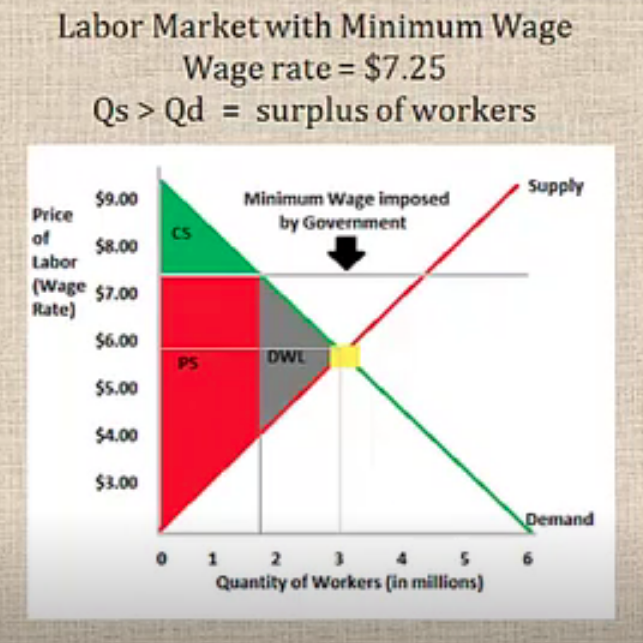 You can see the minimum wage that is imposed, up above where the market would clear. At the minimum wage, now the quantity supplied of workers is greater because more people are willing to supply their labor as wages go up.

However, do all those people get hired?

Well, according to the graph, there are about four million or more workers willing to work at minimum wage. However, notice where it hits the demand curve.

Under two million employers are willing to hire people at that wage. Therefore, there is a gap between the quantity supplied and the quantity demanded.

This will reduce our consumer surplus, while producer surplus will grow slightly.

The grey area is what we call deadweight loss. Before the minimum wage was imposed, the entire triangle was realized. Now, we lose out on the area that used to be both consumer and producer surplus.

A deadweight loss, then, is when we see this decrease in producer and consumer surplus.

A variable that decreases the producer and consumer surplus due to a section of incapacitated resource, such as tax

When analyzing supply, demand, and equilibrium, we are essentially simplifying things.

Obviously, many factors can change. In our apples example, there are potentially many variables that could impact our demand and supply of apples.

However, we use a concept known as ceteris paribus, which means to hold all other variables constant, to isolate outside factors so that we can just look at one situation at a time--in this case, only the supply of apples and the demand for apples.

We will take into account that other things can change, but we will look at those changes one change at a time.

Holding all other variables constant

Holding all other variables constant.

Determined by the difference between actual price paid for a good and the highest amount the consumer would have paid for the good.

A variable that decreases the producer and consumer surplus due to a section of incapacitated resource, such as tax.

The difference between actual payment for a good and the least amount a producer would have agreed to receive for the good.