Identify which measure of center to use given a scenario.

Tutorial
what's covered
This tutorial addresses the question, “Which measure of center should I use?” Our discussion breaks down as follows:

There are multiple measures of center:

Each of these measurements was previously covered in their own tutorials. However, you may be wondering which measure of center you should use for a given situation.

The mean is the default measurement that you should use if there's no compelling reason to use anything else.

The mean is the best measurement to use if possible because it's the most versatile measure of center and therefore, the most appropriate one in the vast majority of cases. However, there are certain situations in which the mean is not an appropriate gauge for center. In those cases, you should use the median. You will rarely use the mode.

The average number in a quantitative data set; the sum of all the values, divided by the number of values.

Sometimes the mean is a poor representation of where the center really is, so the median becomes a better measure of center.

Consider this table of one company’s employees and their salaries:

Eleven of the 12 people make less than $58,000. Only one employee makes more than that, and that employee makes substantially more. The boss’s $200,000 salary is an outlier. Therefore, the mean doesn’t make very much sense as a measurement of the middle.

In this case, a better measure of center would be the median. If you took all the salaries and wrote them out from least to greatest, the median (the one in the middle) would be $42,000. That more accurately describes what a typical worker makes.

big idea
In the presence of outliers, which are very few high or very few low values, the mean won't give an accurate representation of center. Use the median in cases like these.

When should you use mode? The mode isn’t used very often. It's used mainly for qualitative data sets, to determine the category that has the most values in it. Consider the graph below: 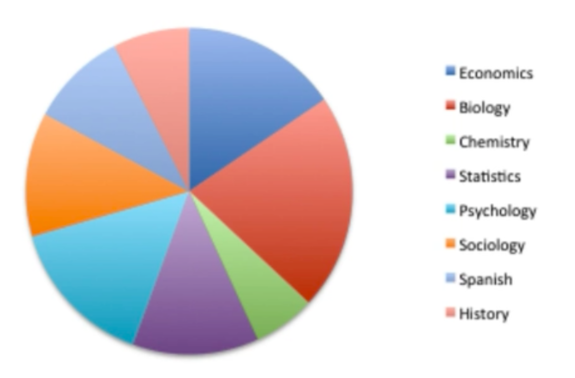 In this case, the mode is biology, the red section.

The mode is also used to describe the peak of a distribution, such as in a histogram.

summary
The mean is our default measure of center. It's the preferred one and the most versatile. However, sometimes if we have outliers or a few values that can skew the mean towards them--either on the high side or the low side--the mean won't accurately represent center anymore. In those cases, the median should be used instead. Typically we reserve the mode for qualitative distributions.

The average number in a quantitative data set; the sum of all the values, divided by the number of values.