This lesson will describe how the differences in concentrations of ions across a plasma membrane set the stage for a nerve impulse.

Tutorial
what's covered
Welcome to this lesson today entitled "Membrane Potential and Action Potential". In this lesson, you will be learning about how the differences in concentration of ions across the plasma membrane can set the stage for a nerve impulse. Specifically, you will look at:

If both sodium (Na+) and potassium (K+) have the same positive charge, how does forcing them to swap places across the cell membrane make a cell negatively charged? For every three sodium ions pumped out of the cell, two potassium ions are pumped in:

The slight negative charge of a cell's resting potential is what allows a signal to travel so fast down the length of a neuron or even the entire body. (Think about how quickly you go from deciding to wiggle your toes to actually performing the action--the signal moves from your brain to your toes nearly instantly.) When a signal reaches a neuron while it's in it's resting membrane potential, all the neuron has to do is open the channels in the plasma membrane, let the excess sodium flow down its electrochemical gradient (from positively-charged, high concentration outside the cell to negatively-charged, low concentration inside the cell) in what is called an action potential.

For this action potential to occur, the voltage difference across a cell membrane has to shift by a certain amount (above the threshold). Once it's shifted by that amount, an action potential can happen.

Here are the steps that occur in an action potential.

First, stimulation has to occur. Signals will reach the input zone of a neuron and will change what occurs in the cell membrane of that neuron.

Now in order for another action potential to occur, you have to restore the resting membrane potential which is done so by sodium-potassium pumps. To understand this, it is important to review the structure of a neuron here. A neuron is a nerve cell and made up of dendrites, which are part of the input zone. Information will move through the input zone, through the dendrites, to the cell body. From there, the action potential will travel along this long narrow part of the neuron called the axon, and then down to the axon endings. So information goes through the input zone, through the cell body, along the axon, to the axon endings. Then from there, that signal will be sent either to another neuron or to a muscle or a gland cell.

To better understand what happens in action potential, take a look at the diagrams below. 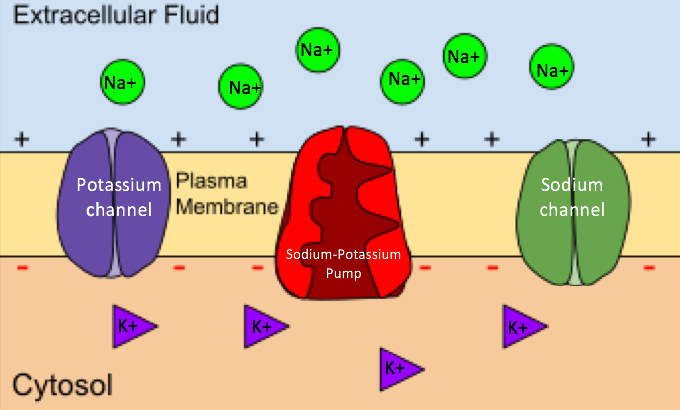 As mentioned, the outside of the neuron is generally positive relative to the inside. You have your cell membrane and then embedded within that, you have something called a sodium-potassium pump. Then you have your gated sodium channels. Typically, these gated sodium channels are closed, making the cell membrane more or less impermeable to sodium. Sodium is not allowed to flow through freely. 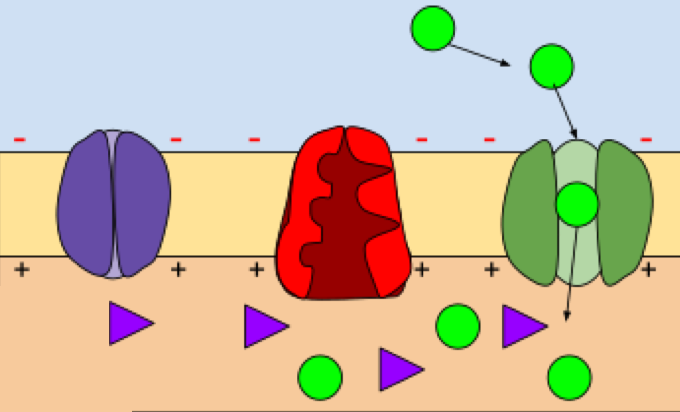 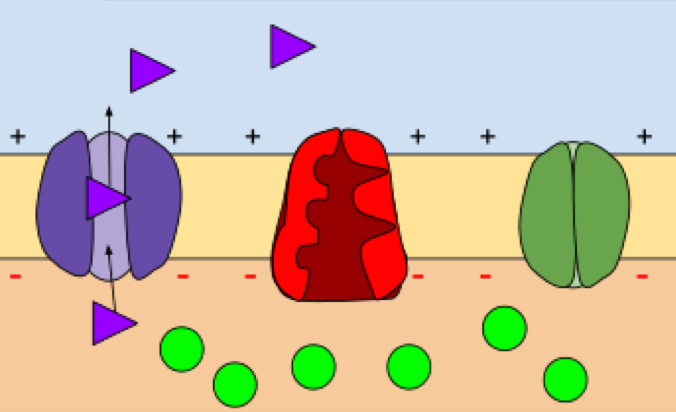 Now, this isn't all happening throughout the whole membrane at the same time; it occurs in patches of the membrane. As sodium moves into the cell in one patch, the previous patch of that membrane will allow potassium to leak out. This reverses the voltage difference across the cell membrane and will cause the impulse to propagate along that cell membrane in patches. You can think of an action potential moving down the axon the way a ring might slide down your finger. 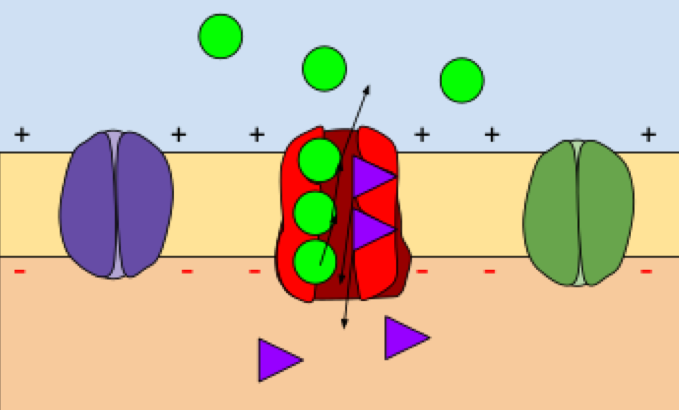 Once the action potential has reached the output zone, the signal will be sent across the synapse (the tiny gap between the axon endings and another cell), usually via a neurotransmitter to the next cell that needs to receive the signal (another neuron, a muscle fiber or a gland cell).

The minimum voltage shift across a membrane required for an action


summary
This lesson has been an overview of membrane potential and how sodium and potassium ions and action potentials. You also got to learn about the specific steps involved in action potential. Keep up the learning and have a great day!

The region of a neuron where signals enter.

The part of the neuron that consists of the axon endings, where signals are sent on to another neuron or to a gland or muscle cell.

The difference in the charge across a cell membrane.

The steady voltage difference that occurs across a neuron’s membrane when it is not being stimulated.

A protein embedded in the plasma membrane that actively transports sodium and potassium against their concentration gradients.

The minimum voltage shift across a membrane required for an action potential to take place.

The part of the neuron located at the base of the cell body that initiates action potentials.