Tutorial
what's covered
This tutorial will cover how graphics can be used in misleading ways. Our discussion breaks down as follows:

Sometimes people create graphics that make you want to think a certain way. They're essentially trying to sway you to believe something, so they'll distort information or create misleading graphics to try to persuade you to think that way.

Graphs can be distorted or misleading in a variety of ways.

Suppose three friends--Paul, Hector, and Juan--were looking at the number baseball cards they had and created the graph below. Do you notice anything misleading about this graph? 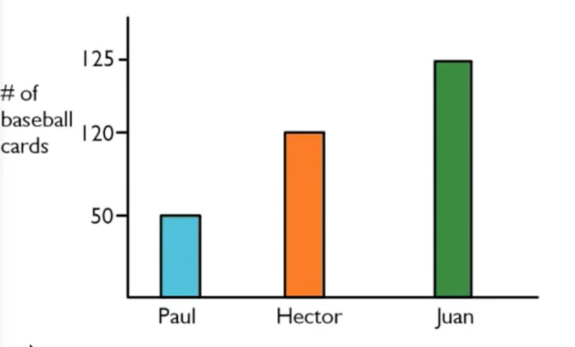 Well, this graph has fairly obvious visual distortion. Notice that the y-axis has unequal scaling. In this graph, one point on the Y-axis represents a 50-point increase (between 0 and 50), whereas another represents a 70-point increase (between 50 and 120). However, the visual size gap between the two is the same, even though 70 is larger than 50.

Even more misleading, there’s another spot on the y-axis that represents a 5-point increase (between 120 and 125). But again, the visual size gap is the same!

Therefore, some graphs are drawn with unequal scales to represent things disproportionately.

think about it
Who do you think created this graph? Because the distortion of the data makes Juan appear to have more cards than his friends, it was probably drawn by Juan.

Which graph is more accurate?

As it turns out, Graph 1 is more accurate. Graph 2 is clearly used to exaggerate the difference between B and C. Notice how much taller C is than B in Graph 2 as opposed to Graph 1. It appears to be twice as tall as B in Graph 1, whereas it seems to be about five times taller than B in Graph 2.

Another consideration if you use a bar graph or a histogram is that it is a good idea to start the vertical axis at zero unless there's a good reason not to start there.

A graph meant to mislead a reader or make a reader feel or believe a certain way.

The way an axis on a graph is measured. Inappropriate scaling can lead to a misleading graph.

Pictographs are plots that use pictures instead of dots or bars. Pictographs show up in newspapers a lot because they're very visually appealing.

Suppose that a class of 17 students is asked to name their favorite sport. One student might have drawn this graph to illustrate the results: 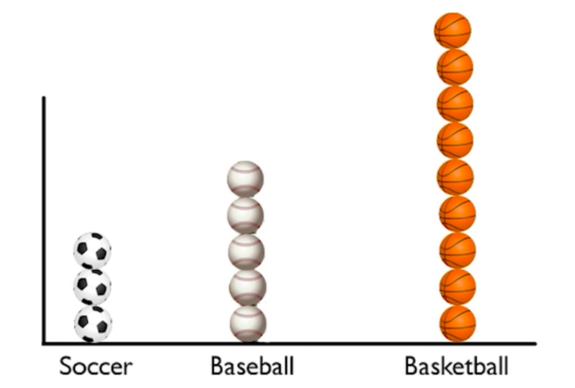 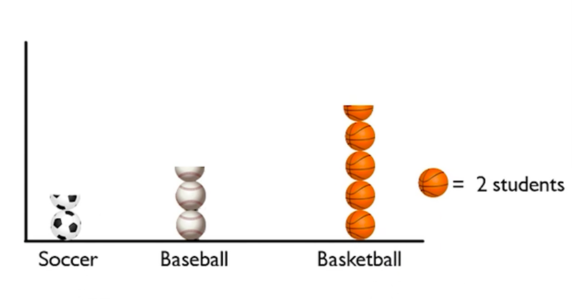 This looks a little odd because you can see half of a soccer ball, half of a baseball, and half of a basketball. However, notice that this student went on to say that every basketball, soccer ball, or baseball actually counts as two students. Therefore, one ball--which is two students--and another half a ball, which equates to one student, represents a total of three students. This is the same as the data that was presented by the other student.

big idea
A pictograph is going to use pictures instead of a scale or dots.

The only problem with pictographs is that sometimes they can be misleading. In the figure below, the USA had the most medals, and Russia had the next highest amount. 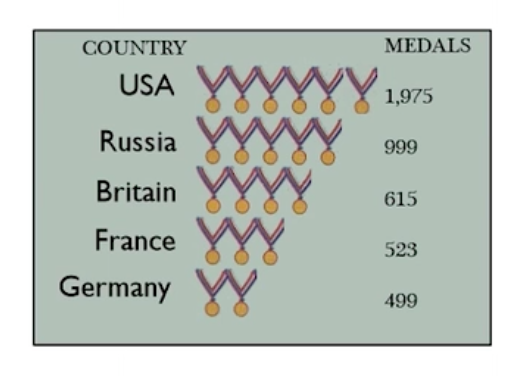 However, it's not really clear what one medal icon actually means in terms of relative size. What we see is that if you divide 1,975 by six medal icons, one medal icon counts for about 329 medals for the USA.

But if you divide 999 by 5 medal icons for Russia, one medal icon actually counts for about 200 medals for Russia.

In fact, none of these are very consistent.

What we should have done is chosen a medal icon to represent a certain, defined number of medals and then extended the ribbon out that far. A better-looking pictograph would be something like this:

Here, the medal icon represents 100 medals and the results will be rounded to the nearest 100. This lines up 20 medals for the USA because the nearest 100 would be 2000. Russia would have half as many medal icons to represent their 999 medals. This shows much more accurately how many more Olympic medals the USA has than the other countries.

A graphical display that uses pictures of physical objects rather than dots or bars to indicate the relative size of numbers.

It's important to know what you're trying to emphasize and not create perceptual distortion. The images you use to represent bins in your graphs can also distort meaning.

Suppose a class of 18 students was asked their favorite sport. Three kids said soccer, five said baseball, and the remaining said basketball. A student drew this graph based on the results: 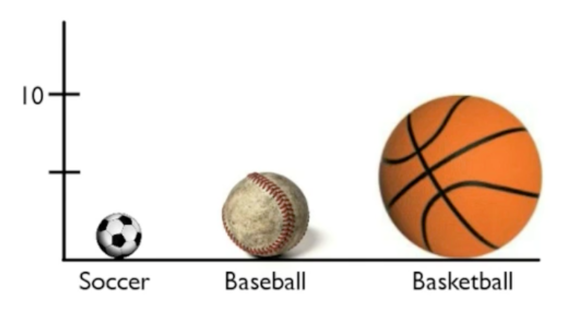 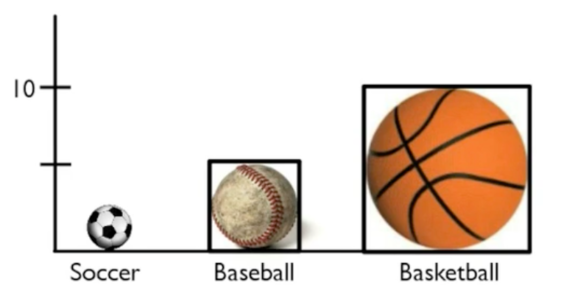 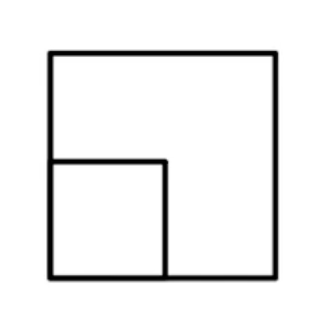 Using area or three-dimensional visual tricks to make certain values appear bigger or smaller than they are.

To make matters worse, technology has introduced us to lots of different misleading graphs, like the one below: 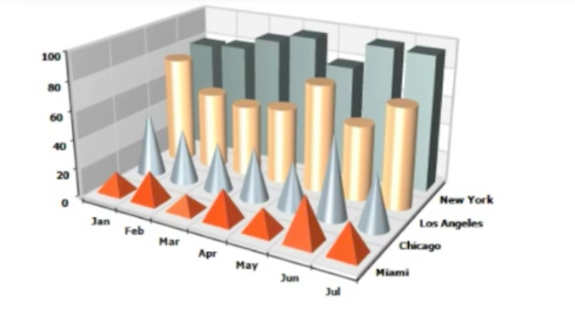 The additional problem comes from the lack of clarity about what the graph is comparing. Is it comparing the height of these things or the volume of these things? For instance, a cone only has about 1/3 the volume of a cylinder with the same base and height. Therefore, it doesn't really make sense to be comparing cones and pyramids to cylinders and boxes.

Because the previous graph is three-dimensional, there's no way to easily compare heights. Is the cone supposed to be taller, shorter, or the same height as the cylinder behind it? It's going to be very hard for anyone to tell, which makes this is an incredibly misleading graphic.

Technology, like certain spreadsheet programs, has allowed you to easily create many different graphs. Using so many technological tricks, like three-dimensional cones and cylinders, can distort your data.

The best choice, if you're going to use bar graphs, would be the simple ones, like the simple two-dimensional ones at the top. For the data above comparing the four cities, a better choice would be something like a time series, since this graph is meant to compare across time. 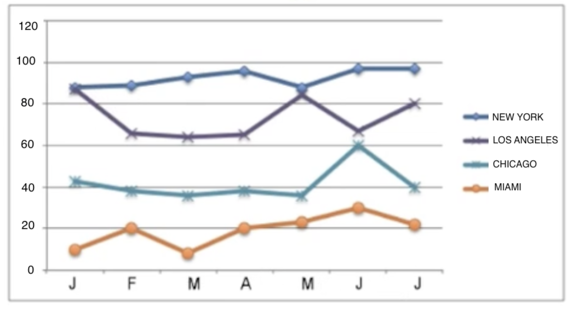 This is a lot more useful to anyone reading it than the previous example. It isn’t as flashy, but none of the information is hidden or distorted.

summary
Graphical displays can be manipulated in many different ways. If you use a picture that does not represent the same amount in each category, you could be creating a misleading pictograph. Similarly, if you use an inappropriate scale, you can exaggerate the differences or use areas to make differences seem larger than they actually are. You can also use three-dimensional displays that aren't really clear at all. These are all ways that misleading shapes can create misleading graphics; technological distortions are ways to create these misleading graphs. As a statistician, your goal is to make the complicated simple and to make the data easy to understand. The goal is clarity--and all these misleading graphics don't do that!

A graph meant to mislead a reader or make a reader feel or believe a certain way.

Using area or three-dimensional visual tricks to make certain values appear bigger or smaller than they are.

A graphical display that uses pictures of physical objects rather than dots or bars to indicate the relative size of numbers.

The way an axis on a graph is measured. Inappropriate scaling can lead to a misleading graph.