Tutorial
what's covered
This tutorial will cover monetary and fiscal policy, focusing on how they both work to stabilize or stimulate the economy.

Let's begin by discussing monetary policy, which is policy typically set by a central banking authority, which in our case is the Federal Reserve, or simply the Fed. In this type of policy, money supply access and the resulting cost or access to money by consumers, meaning the interest rate, is varied to assist in stabilizing economic activity.

So, who is the Fed? Most people have a fair amount of knowledge about the government, but not as many Americans know much about the Federal Reserve System and its functions.

There are 12 Federal Reserve districts in our country, and the purpose for each of them is to monitor and report on banking conditions throughout the country.

So the quite a few main functions of the Fed, including:

We are going to focus primarily on that last bullet point.

Policy typically set by a central banking authority, whereby money supply access and the resulting cost or access to money (interest rate) is varied to assist in stabilizing economic activity

The Fed has three main tools in their arsenal.

The RRR is the portion of funds that banks have to keep on hand at any given time, and they can lend out the rest. Obviously, banks are in business to make money, so they lend out most of the money that we deposit in banks, which is known as a fractional reserve system.

Currently, the RRR is set at 10%, where it has been for a very long time, so banks are required to keep 10% of all deposits on hand.

Now, technically, if the Fed wanted to increase credit and banks' ability to loan out money, they could reduce this percentage by lowering it, to 9% or 8%, for instance, which would allow banks to loan out more money.

Conversely, if they wanted to decrease credit or the banks' ability to loan out money to the public, they could raise the amount of money that banks were required to keep on hand.


Interest rates are the second tool of monetary policy, and the Fed controls what is known as the discount rate. The discount rate is the rate that banks pay to borrow from the Fed.

This discount rate is the driving force that controls what other interest rates are in our country.


The last tool to discuss is the buying and selling of securities. The Fed buys and sells bills, bonds, and notes, known as treasuries, on the open market. The only difference between them is their length of time on the open market.

Now, if the Fed wants to get more money circulating in our economy--to speed things up, in a manner--they would adopt a policy of buying securities.

hint
Here is a simplified way to think about this. If someone buys something from you, you walk away from that transaction with money, correct? Similarly, if the Fed buys securities on the open market, that puts more money circulating in the economy. On the contrary, if someone sells something to you, money is taken out of your pockets. You leave with the item, but you have given up money--in the same way that the economy loses circulating money when the Fed sells securities.

Fiscal policy is set by a central government authority whereby government spending is the main thing adjusted to try to stabilize economic activity. 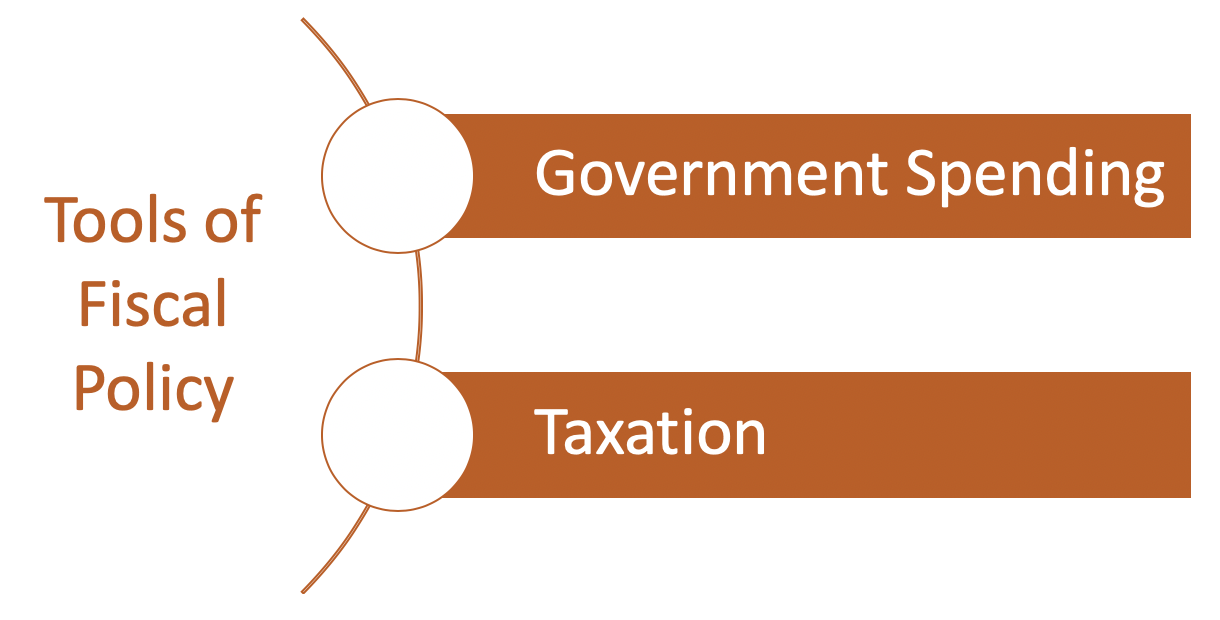 
You are likely aware that the government spends money in our economy in many different areas, such as:

These are just a few examples. The idea is that if the government wants to stimulate the economy and get it moving again during a slowdown, it can spend more money in order to create jobs or give people money to spend.

If, for example, the government spends more money in education and healthcare, it could create jobs, which would eventually give people more money to spend, and in turn, pick up the economy when it is starting to slow down.

On the other hand, if the government needs to slow down an over-heated economy--meaning there is a lot of inflation and they want to curb people's spending--they can actually cut spending levels, by reducing some of these areas of spending.


Taxation is the other area that the government can control. As you well know, all federal, state, and local governments collect taxes from citizens in order to fund their programs.

Again, thinking about it a similar way, if they want to stimulate the economy, they want people to be spending money. So, what can they do? They can cut taxes to give people more money to spend.

The opposite of that would be if they want us spending less money, in which case, they can raise taxes to slow down people's spending in the economy, essentially taking money out of our pockets.

Expansionary policy is when either the Fed or the government decides to try to expand the economy, typically during a recession or what looks like an impending recession.

As we are slowing down, the government or the Fed enacts either monetary or fiscal policy to stimulate economic growth, as measured by the GDP growth rate.

Here is a chart outlining the tools used by both types of policy to expand the economy.


Now, the goal with both monetary and fiscal policy is to stimulate the economy, but they work in different ways. Monetary policy works through interest rates and credit, by enticing banks to make loans, whereas fiscal policy works more directly in simply getting people the money to spend right now.

One important difference to note is that monetary policy will take longer than fiscal policy to impact consumer behavior.

For example, you are not necessarily going to go out and buy a house tomorrow just because the Fed lowered interest rates, whereas if the government cuts your taxes, you feel that impact immediately in your next paycheck--and then you either go spend that money, or you don't.

Contractionary policy is the opposite, when either the Fed or the government tries to slow down economic growth. Again, this might occur during a period of inflation.


With monetary policy, the Fed will try to keep more money in the banks and less in our hands by raising interest rates, versus fiscal policy, where the government is trying to take a little bit of money away from us and cool down our spending.

When we are not in a recession or growing too rapidly, we're said to be in equilibrium. Therefore, policies tend to be neutral.

In these cases, spending is generally going to equal revenue from taxes, not greater than or less than. Also, the Fed, through monetary policy, keeps the money supply consistent.

summary
Today we learned how both monetary policy and fiscal policy work to stabilize or stimulate the economy. We learned about the tools of monetary policy, which are required reserve ratio, interest rates, and buying/selling securities, and how the Federal Reserve uses these tools to manage the money supply and credit. We discussed what the government does to influence business cycles, through its use of government spending and taxation. Finally, we compared and contrasted expansionary and contractionary policies and wrapped up today's lesson by discussing neutral policy.

Either monetary or fiscal policy that is enacted to stimulate economic growth (as measured by the GDP growth rate).

Policy typically set by a central banking authority, whereby money supply access and the resulting cost or access to money (interest rate) is varied to assist in stabilizing economic activity.

Either monetary or fiscal policy that is enacted with the intent to maintain the economy at its present growth trajectory—non-intervening policy.