Tutorial
what's covered
This tutorial will cover monopolistic competition as one of the four market structures studied in economics, discussing its definition and main characteristics.

Today we will discuss where monopolistic competition falls in the spectrum of market structures.

As you can see below, we have the extremes of perfect competition, where there are many sellers selling a homogeneous product, and monopoly, where there is only one firm selling a unique product. 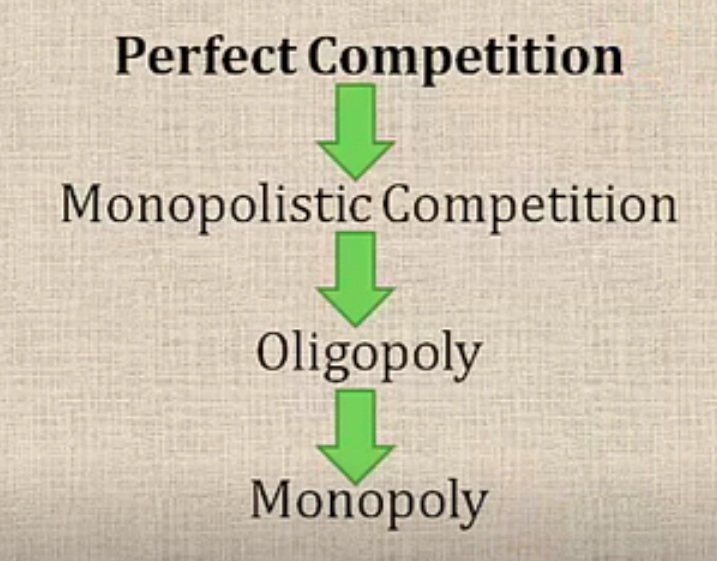 Within the market structure of monopolistic competition, there is a differentiated product.

Although products may be similar, these firms will do everything they can to differentiate their product.

hint
This is the biggest difference between monopolistic competition and perfect competition, where there is no ability to differentiate.

Some classic examples of monopolistic competition include:

There are many firms selling a similar product.

They have some control over market price, meaning they have the ability to choose what price they want to charge, but they must be careful.

think about it
Can McDonald's raise prices significantly?Do they have enough market power that they could raise the price of their hamburgers by a few dollars? More than likely the answer is no. They face a lot of competition in the fast food industry so they have to be careful. However, it is their prerogative; they have some control over market price and they have tried to differentiate themselves from their competition.

Now, there are too many firms in a monopolistic competition structure for them to strategically price. By strategic pricing, we meant that all of the firms would get together and try to charge a very similar price.

However, if a firm enters or exits the market--for instance, if McDonald's left the fast food industry--then market price can certainly be affected for the remaining players. Therefore, one firm exiting or entering can have an impact on the overall market price.

However, in the market structure of monopolistic competition, information is not perfectly shared between the firm and the consumer. Therefore, there is not what we would consider perfect information, as there is in perfect competition.

Next, there will be some inefficiencies that arise in monopolistic competition.

In contrast, the reason we start with the market structure of perfect competition is that it is so productively efficient. Perfect competitors have no choice but to produce at the lowest cost possible because of how much competition they face.

In addition, they have no control over the price they are charging, so if they are not producing in the cheapest or most efficient way possible, then somebody else will.

In monopolistic competition, the name of the game is differentiation. Because of this, they might, for instance, spend a lot of money on advertising.

think about it
This begs the question, then, does the money that they are spending on advertising really increase the quality of the product? Is this good for the consumer? Well, there are differing opinions on the topic. Some may argue that it can help increase the flow of information, while others may question whether the information we are getting from advertisements is factual or not.

You can certainly determine your own opinion about it, but note that there are some production inefficiencies that can arise due the money being spent on advertising, for example.

However, monopolistic competition is certainly not a monopoly with sole power in the market as the only one selling a product.

Let's look at who they act more like, a perfect competitor or a monopolist, which depends on whether we are focused on short run or long run.

In the short run, firms in monopolistic competition behave more like monopolists, because they are trying to differentiate their product and establish market power, so that consumers go to them and not the competition.

They will set prices and produce the quantity that maximizes their profit, just as a monopolist would do, because they have enough power to do so.

In the long run, because barriers to entry are low--making it easy to get into and out of this industry--monopolistic competitors face a lot of competition.

For example, in the fast food industry, almost anybody, in theory, could enter the market and start another restaurant. Therefore, because of those low barriers to entry, they face a lot of competition and are forced to behave more like perfect competitors.

Therefore, how a monopolistic competitor behaves depends on how you look at it--short run or long run.

summary
We began today's lesson by discussing the different factors that affect the behavior of firms. We learned that monopolistic competition is a market structure with the following characteristics: differentiated product, many firms with some control over price, imperfect information, free entry and exit, so the barriers to entry are relatively low, and some production inefficiencies. Lastly, we discussed how players in a monopolistic competition behave in the short run vs. long run.