Factor a quadratic expression in the form ax²+bx+c.

Factoring a quadratic is the opposite process of FOILing: we are taking a quadratic expression, and rewriting it as two binomials being multiplied together. With basic factoring, we are seeking to identify two integers, p and q, such that:

When factoring these kinds of quadratics, we still start with the product of p and q, pq. We break down the constant term into two integers that will multiply to equal that constant term. However, when we add the numbers together to match up with the x-term coefficient, we must first multiply q by a (this is seen in the aqx term above).

Let's use this pattern to factor the quadratic:

These are our candidates for what p and q can be. To determine which pair of integers we will use, we must first multiply q by 3 (because that is our leading coefficient) and then add to p:

Another method to factoring quadratics with a leading coefficient other than 1 is to use the box method. Let's use the box to factor the same quadratic as above: 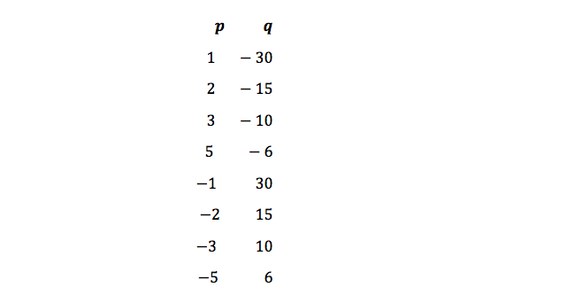 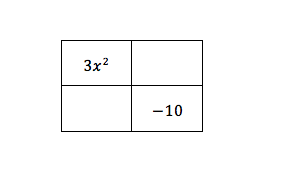 Then, we use 2 and -15 (identified from earlier) as coefficients to x terms to be included in the 2x2 box: 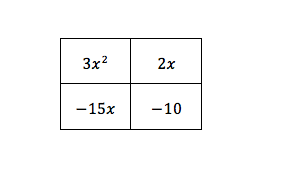 It does not matter which squares the terms go into. Either way, you'll get the same answer. Also note that the sum of all of the terms in the square equals our quadratic.

, our original quadratic. If the sum doesn't add up, you've made an error somewhere.

What we factored outside of the box forms the binomials used in factored form: 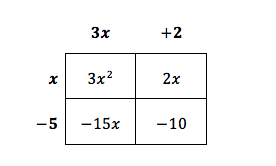 summary
Factoring is the process of writing an equation from expanded form to factored form. A review of basic quadratic factoring (when the x-squared coefficient is equal to 1), involves finding two integers whose sum is the coefficient of the x term and whose product is the constant term. Factoring when a ≠ 1 involves multiplying the leading coefficient of x-squared, or a, by the constant term, and identify two integers that multiply to this value. This is also known as the box method.
Rating Header
Poor
Fair
OK
Good
Great
© 2021 SOPHIA Learning, LLC. SOPHIA is a registered trademark of SOPHIA Learning, LLC.