Free Professional Development
Or
Close Popup
+
3 Tutorials that teach Motivation, Morale and the Early to Mid-20th Century
Take your pick:
Previous Next

Motivation, Morale and the Early to Mid-20th Century

Tutorial
what's covered
What motivates you? Is it money, or time off? Is it recognition, or an award or reward? This tutorial will cover motivation, morale, and the early to mid-20th century, focusing on the major historical theories of motivation relevant to business. Our discussion breaks down as follows:

Motivation is the justifications, consciously and subconsciously, for acting in a particular way to a situation.

Perhaps you're going to school because you want to be educated in a particular field of study. That would be your motivation for that particular action.

Morale is the certainty of an individual or a group at a specific time, and morale can take on the form of motivation. If the morale of a group or individual is high, then they can be motivated to do a particular action exceedingly well.

Typically, an organization's objective is to achieve its goals in the most efficient manner possible. Employees need more than just the correct raw materials and equipment in order to get the job done. At work, they need morale. They need a reason to be motivated, a reason to do their job.

Motivation, morale, job satisfaction, and satisfying the needs of the employees are all interconnected in helping an organization achieve its organizational goals in an efficient manner.

The certainty of an individual or group at a specific time

Let's take a look at some different studies that relate to motivation and morale that were done in the early to mid-20th century.

The classical theory is the theory that employees are motivated solely by money, which was thought to be the case for a long time. This theory was introduced by a man named Frederick Taylor in 1911.

Mr. Taylor realized, though, that his classical theory wasn't always correct, and that employees and managers are sometimes motivated by something more than money. They could be motivated simply by doing a good job--that self-satisfaction achieved from doing a good job.

think about it
Are you motivated by something more than money? Do you ever seek attainment or recognition? As you can likely see, it's not always about money, as the classical theory would have you believe.

The theory that employees are motivated solely by money

Elton Mayo, when he was at the Western Electric company, evaluated the lighting levels in a factory. He wanted to determine the best lighting level to achieve the most efficient workforce possible.

The two-factor theory, posited by Frederick Herzberg in Pittsburgh, is defined as a theory of motivation which argues that both workplace hygiene and motivation have an impact on worker satisfaction. Hygiene factors, in this case, refer to factors such as workers' supervisors, pay, security of their jobs, working conditions, company policies, and interpersonal relationships.

The motivational factors were things like achievement or recognition. Sometimes it was simply the satisfaction of doing the job itself, or the responsibility that goes along with doing that job, that motivated workers. Or, it could be the advancement or growth within the company that motivated the employer and increased employee satisfaction.

A theory of motivation which argues that both workplace hygiene and motivation have an impact on worker satisfaction.

Maslow's hierarchy of needs model is a theory of motivation that argues that humans must meet their most basic needs before meeting complex ones. This model was developed by a man named Abraham Maslow.

Maslow's hierarchy of needs takes the form of a five-level pyramid of needs, which range from physiological needs all the way up to something called self-actualization. 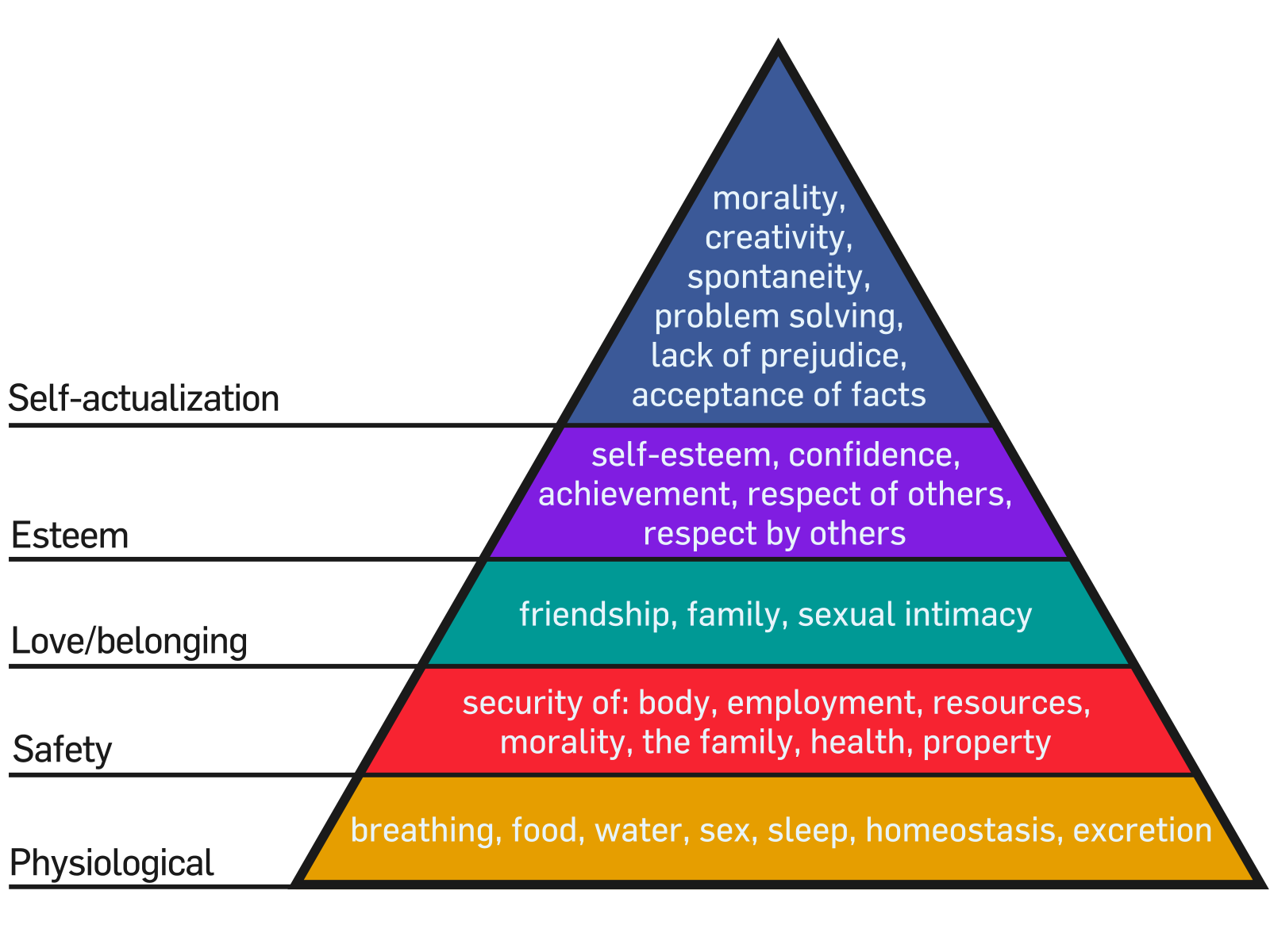 The five levels within the pyramid include the physiological needs, as mentioned before; security needs; social needs for love and belonging; a need for esteem or recognition; and finally, self-actualization at the top of the pyramid, once all of the needs below have been satisfied and a person can become self-actualized.

big idea
The important thing to remember with Maslow's hierarchy of needs is, according to Maslow, that it's impossible for a person to move up the chain or the hierarchy model without first satisfying the needs of the level immediately below. For instance, you can't move up to the esteem level of the hierarchy of needs without first satisfying your physiological needs, your security needs, and your social needs.

In the 1960s, a man named Douglas McGregor stated that managers tend to operate according to Theory X or Theory Y.

The Theory X model is a theory of motivation based on the assumption that workers are naturally lazy, will avoid work if they can, and inherently dislike work. As a result of this, management believes that workers need to be closely supervised. People who ascribe to Theory X are lazy, irresponsible, unproductive, and unambitious.

The Theory Y model is exactly the opposite--the theory that workers are naturally productive and self-motivated, and want to do a good job. In this theory, management assumes employees are ambitious and self-motivated and can exercise self-control. It is believed that employees enjoy their mental and physical work duties, so work to them is natural and will seek out and accept responsibilities for accomplishing objectives. People who ascribe to Theory Y are energetic, responsible, and ambitious.

A theory of motivation that workers are naturally lazy

The theory that workers are naturally productive

You can tell when someone is a good motivator of others because you'll notice a couple of things. One, that people around this particular person want to do their best when they're around them, doing the job that they have assigned. In addition, when motivating others, it is important to assess each person's "hot button," or what it is that makes them motivated. A good motivator will use that to get the best out of each employee.

Good employers are able to motivate many kinds of direct reports, teams, or project members. It doesn't matter what background they come from, or what type of worker they are--a good motivator can still motivate them regardless.

A good motivator invites input from each person and shares ownership and visibility with that person for the goals that they've set. A good motivator can help empower other people, and is someone that people really like working for; they can make others feel important.

summary
Today we learned about motivation and morale, discussing the difference between them and how they work together. We also learned about several different studies that were done in the early to mid-20th century, and the resulting theories of motivation and morale: classical theory, Hawthorne effect, two-factor theory, Maslow's hierarchy of needs model, and Theory X/Theory Y.

Lastly, we learned about motivating others, and what a good motivator looks like.

The theory that employees are motivated solely by money.

A theory of motivation which argues that productivity will increase when managers pay attention to their workers.

A theory of motivation that argues humans must meet their most basic needs before meeting more complex ones.

The certainty of an individual or group at a specific time.

A theory of motivation that workers are naturally lazy.

The theory that workers are naturally productive.

A theory of motivation which argues that both workplace hygiene and motivation have an impact on worker satisfaction.