(more)
See More
Tutorial
what's covered
This tutorial will focus on the biological aspects of psychology, exploring how the brain and nervous system work to create our minds and behavior. You will also reflect on how your self and social awareness skill has a basis in biology. Our discussion breaks down as follows:

A neuron is the basic cellular building block of the brain and nervous system. It acts as a messenger and sends information to and from the brain and other parts of the body. It allows certain messages to be sent so that you can move and act in the ways that you choose.

A neuron is also called a ‘’nerve cell’’ because groups of neurons make up a nerve, a term you’re probably familiar with. Nerves transmit information throughout the rest of the body.

2. Structure of a Neuron

A neuron has certain special structures that make it different from other cells, but allow it to function as this messenger within your body.

First, there is the soma, or the cell body. This is the central area of the neuron that makes it just like other cells. It contains all the different structures that different cells in your body contain, such as the nucleus containing DNA, the mitochondria, etc. The important thing to remember is that the soma is your cell body or the center of the neuron.

The central part of the neuron, which contains all the basic parts of a cell (nucleus, mitochondria, etc.); the cell body

Outside of the soma are these little branching, tree-like structures, called dendrites.

Dendrites branch off into lots of smaller parts and receive information from other neurons. This is the receiving section of the neuron. It takes in messages that other cells and neurons send to it and then transmits it to other cells.

The part of the neuron that branches out into many smaller parts, which receive signals from other neurons

Extending out from the cell body is a long tail-like structure, called the axon of the cell. While the dendrite's job is to receive information from other neurons, the axon's job is to transmit that information to other attached neurons.

The axon starts at the cell body and extends all the way to a button-like structure at the end, which is called the axon terminal.

did you know
The length of an axon can vary wildly. Some axons can be only 1/10 of a millimeter long, but some of them can extend up to a meter long, especially in other parts of the body.

The axon transmits an electrical impulse from within the cell, starting at the dendrites and the cell body, all the way across the tail and out to other neurons that might be attached to it. It's sort of like an electrical wire, and just like with an electrical wire, the transmission of that electrical signal can be improved by insulating it, or putting something around that axon to make the message transmit faster.

This is true in certain neurons within the brain itself; they have what is called a myelin sheath. The myelin sheath is an insulating layer of fat, called glial cells, which wrap around the axon and makes that electrical impulse shoot faster through the axon, down to other neurons that might be attached.

did you know
Because the myelin sheath is made of fat, it actually makes the neuron look like it's white, which is why we say there is white matter in the brain. It is the myelinated neurons within the brain, versus gray matter, which comprises the non-myelinated ones.

Everything humans do can be traced back to neurons. Even our self and social awareness skill, which may seem like a complex process of understanding ourselves and others, has a biological basis.

The nervous system is essentially the body's communication system. It allows information to be sent to and from your brain, allowing you to control the rest of your body. These messages allow you to do all of the things that constitute your mind and behavior.

There are two different ways in which the nervous system communicates:

So, how do they actually communicate between other cells to send information to lots of different ones? 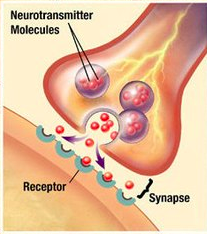 This means that another way is needed to communicate with those cells. Therefore, when that electrical impulse reaches the axon terminal, it releases what are called neurotransmitters.

Neurotransmitters are chemical messengers that attach themselves to the dendrites of other neurons surrounding them. This is helpful because it allows one neuron to communicate with many different neurons by sending out all of these different chemical messengers. It's not just one-to-one--the message could potentially go to hundreds of neurons.

Areas on neurons that connect and respond to neurotransmitters

There are two general types of neurotransmitters:

Excitatory neurotransmitters lead to the firing of neurons, or the threshold of excitation, and ultimately, to action potential.

The most common type of neurotransmitter is acetylcholine, which is abbreviated as ACH. This is an excitatory neurotransmitter, and it is used within the body to help with muscle movement, as well as the activation of the peripheral nervous system in different ways. In the brain itself, it is attached to attention and memory.

did you know
It is thought that a lack of acetylcholine can contribute to Alzheimer's disease.

The most common neurotransmitter, which is used in movement in the peripheral nervous system and related to attention and memory in the brain

Inhibitory neurotransmitters prevent the firing of neurons, keeping that state of resting potential instead. This doesn't allow the other neurons to fire.

One of the more famous neurotransmitters is dopamine, which is actually considered both an excitatory and inhibitory neurotransmitter. It plays a role specifically in the motivation of people, as well as reward and reinforcement systems within the brain.

did you know
Dopamine leads to a lot of addictive behaviors. Addiction to gambling or alcohol is generally a result of dopamine being overly activated within the brain. Dopamine is also chemically similar to cocaine; therefore, a lot of drugs will act like dopamine and lead to these same feelings of pleasure.

Lastly, there is a class of neurotransmitters called neuropeptides, which are a special group that regulate certain activities of neurons and systems within the brain itself.

An example of a neuropeptide is an endorphin, which acts to reduce pain and leads to feelings of euphoria or positivity about yourself, especially when you feel pain or are stressed out. Endorphins are what results in a runner's high. When you are running, you may get a sudden sensation of feeling exceptionally good--and good about yourself--which is the result of endorphins being activated within your brain.

’’’4d. How Some Neurotransmitters Affect Behavior’’’

Neurotransmitters are connected to many of the aspects of psychology that are or interest to researchers. Here are some examples of how these chemical messengers impact human behavior.
summary
This tutorial discussed how the brain and nervous system work to create our minds and behavior, specifically focusing on neurons. A neuron is the basic cellular building block of the brain and nervous system. You also learned how neurons play a role in the development of your self and social awareness skill. A neuron has certain special structures that make it different from other cells, but allow it to function as a messenger within the body. Key components within the structure of a neuron include the soma, or cell body, dendrites, the axon, and the myelin sheath.

We also learned how the nervous system is the body's communication system. Information is sent to and from the brain, which allows control over the rest of the body. These messages allow you to do all of the things that constitute your mind and behavior.

The most common neurotransmitter, which is used in movement in the peripheral nervous system and related to attention and memory in the brain.

The state in which a neuron reaches its threshold of excitation and fires, or sends an electrical impulse down the axon.

The long tail-like structure that comes off of the cell body and sends signals along the cell and out to other cells.

The part of the neuron that branches out into many smaller parts, which receives signals from other neurons.

A layer of fatty cells that covers some neurons' axons and allows them to transmit information faster in the brain.

Cord or cable-like bundles of axons which carry messages to and from the body and brain.

A special class of neurotransmitters that regulate the activity of neurons and systems in the brain.

Chemical messengers that allow neurons to communicate with other neurons across the synapse.

Areas on neurons that connect and respond to neurotransmitters.

The central part of the neuron, which contains all the basic parts of a cell (nucleus, mitochondria, etc...); the cell body.

The small space between the axon terminal of one neuron and the dendrites of other neurons.

The level or point at which a neuron fires or a neural impulse is triggered.