Or
Close Popup
+
2 Tutorials that teach Neurons: Communication
Take your pick:
Previous Next

Examine how neurons communicate with one another.

Tutorial
what's covered
This tutorial will focus on neurons and how they communicate. Our discussion breaks down as follows:

The nervous system, which is the brain and neurons, and all the nerves that go throughout the body, acts as the body's communication system. It sends information to and from the brain, and allows you to control the rest of your body in different kinds of ways.

There are two different ways that a neuron communicates: one, within an individual neuron itself, and two, between different neurons. Today we will focus on that message that's being sent inside of one neuron.

1a. Threshold of Excitation and Ion Channels


The process starts at the dendrites, which are the long, tree-like branches that extend from the cell body itself. You may recall that dendrites collect different kinds of messages from other neurons surrounding it.

Now, the neuron doesn't necessarily do anything until it reaches a certain level of messages. So, one message doesn't cause it to communicate its information; it has to be a combination of many messages. This is what is called the threshold of excitation, the point at which the neuron is caused to fire, or a neural impulse is triggered.

The axon, which is that tail-like structure that extends off of the cell body and acts as a transmitter of information, is actually covered in all these tiny little holes or tunnels, called ion channels. The ion channel allows the cell to control or pump the amount of ions, which are positively or negatively charged atoms, either inside of the cell or outside of the cell. 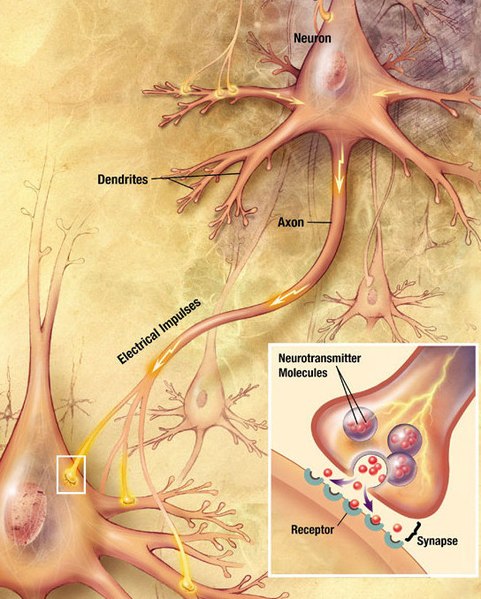 Small tunnels along a neuron that pump ions from one side of the cellular membrane to the other, which creates an electrical charge


1b. Resting Potential and Action Potential

When the neuron receives a message from the dendrites--enough to reach that threshold of excitation--then the cell switches from a resting potential to an action potential. This is when it sends that neural impulse; it fires. This means that all of a sudden, the ion channels throw themselves open, and the sodium comes rushing inside of the cell, and the potassium comes outside of the cell.

Eventually, the ion channels next to it also throw themselves open, and send sodium inside of the cell and potassium outside of the cell, continuing all the way down the axon, until it reaches the axon terminal, that button at the very end of the cell.

When a neuron fires, it is an all-or-nothing reaction. Either it fires completely and throws open all of the ion channels, or doesn't fire at all. There's no partial reaction; it's just like a light switch being turned on or off. In addition, these neural impulses, or action potentials, can move very quickly, so they're fast, although not necessarily instantaneous. This is why it takes a split second for us to react to something in our environment.

After all of this exciting action potential happens, the cell then resets. Essentially, the ion channels pump the potassium back inside the cell, and the sodium back outside of the cell. It resets itself, and prepares to fire again, going back to a resting potential. This is how the information is sent; an electrical charge is created that goes all the way across a neuron, and gets ready to send information to other areas and other neurons that are attached to it.

summary
This tutorial discussed neurons, specifically focusing on neuron communication. There are two ways for neurons to communicate: within the neuron itself as well as between different neurons. We learned that neurons must reach the threshold of excitation in order to trigger a neural impulse. The axon is covered in tiny tunnels called ion channels that allow the cell to control or pump the amount of ions, which are positively or negatively charged atoms, either inside of the cell or outside of the cell.

The state in which a neuron reaches its Threshold of Excitation and fires, or sends an electrical impulse down the axon.

Small tunnels along a neuron that to pump ions from one side of the cellular membrane to the other, which creates an electrical charge.