Or
Close Popup
+
3 Tutorials that teach Nonverbal Communication
Take your pick:
Previous Next

Recognize the role of nonverbal communication.

(more)
See More
Tutorial
what's covered
This tutorial will cover the topic of nonverbal communication through the definition and discussion of:

It's been noted that about two-thirds of communication happens nonverbally, which is a staggering amount. Nonverbal communication is extremely important--your facial expressions, gestures, body movements, eye contact (or lack thereof), and touches all combine to either support or undermine what you're saying with your words.

Personal space, or where you place your body, is a socially constructed aspect of body language. Different cultures have different parameters governing how close you can get to somebody. Essentially, personal space is the space nearest your body that you can claim as your own. 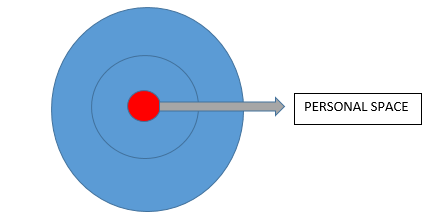 The center circle represents your personal space. There are concentric circles around your personal space that delineate the use of space around you. In American culture, it’s not really acceptable to get too close to somebody you don't know, but the rules are different depending on the relationship and the culture.

Suppose you're riding the city bus home late at night. It’s a relatively empty bus, and when the next person gets on, rather than taking an empty seat ten feet away, they decide to sit right next to you.


That's likely going to unnerve you. Simply moving their body through space like that is violating your cultural constructions of how people should move and comport themselves. You might think, “What is this person trying to do? Do they want to rob me? Are they going to try to hurt me?” Instantly, you assume they have some malicious intent, all because you don’t understand why they are so close to you.


You do this because they are violating your culturally encoded notions of how to move one’s body through personal space. What's fascinating about personal space is how it is constructed through society and social interaction.

The region surrounding a person that they regard as private.

It’s interesting to note how people give different meanings to different forms of nonverbal communication.

Using the face is the most powerful channel of nonverbal communication. There was a particular episode of the television show Seinfeld in which George gets some grapefruit in his eye at breakfast which causes him to walk around and wink involuntarily the rest of the day. George gets into all kinds of problems because of this, because culturally, people understand a wink to mean certain things. It can mean you're being let in on a secret, like a covert way to acknowledge to another person, “I want you to do this, I know what you're saying.” Therefore, it’s a violation then of our cultural ways to wink.

When you’re communicating verbally and nonverbally with somebody, you’re ‘taking a face,’ which is a term of Goffman's. A face is a posture that is striven for, a stance you take, in social interaction. You may wear many faces simultaneously throughout your life.

If you're at the office and you are talking about something inappropriate in front of your boss, this could potentially cause you to lose face. You run the risk of losing your face of professionalism in the eyes of your boss, which could be uncomfortable for all parties involved. It could also result in embarrassment, which is a public loss of face, or more simply, the discomfort of making a social error publicly. Therefore people want to avoid embarrassment as much as possible.

think about it
Suppose your teacher asks you to watch a video for class and then sees you at your desk watching it, and notices that you're slouching in your chair, talking on your cell phone, eating, etc. When your teacher asks you after class, how would you respond? Likely, you might say that the tutorial was great, that you loved it, and you can't wait to watch more. In reality, though, the expression you were giving off doesn't match the expression you give. If your teacher calls you out on it, it would cause embarrassment, and in social interaction, embarrassment is to be mitigated at all costs. People want to give others a positive impression of themselves, and aligning verbal and nonverbal communication is a way to do that.

The way that people carry themselves, an overall aspect or presentation.

The idea of face relates to the notion that one's presentation of self is a mask that people work to maintain in social situations, thus losing face is the result of a social misstep that results in emotional pain or embarrassment.

Discomfort after making a social error.

Along with saving face, keeping positive images of yourself, impression management, and making sure others see you in a positive light, is the idea of idealization. Idealization is the process of people trying to create positive images of themselves. It's the act of convincing others, and maybe even themselves at times, that what they're doing and why they want to do it reflects cultural values and socially sanctioned values, rather than more selfish motivations.

If you're volunteering for an organization to do some charity work, you might idealize your motivations for doing so. You might really want to do it to improve your resume or some other self-serving reason, which coincidentally might be the real reason why a lot of people do altruistic volunteer activities, but you don't want to say that. You want to try to convince others and yourself that what you're doing reflects culturally sanctioned motives, so instead, you claim that you’re volunteering for the Red Cross because it's a noble thing to do and it's great to help others. You conceal your selfish motivations, which is idealization.

Occurs when people create highly favorable impressions of themselves and their intentions so as not to appear selfish.

summary
Today you learned about an introduction to nonverbal communication, including the concepts of personal space, Erving Goffman’s idea of losing face, and idealization.

Source: This work is adapted from Sophia author Zach Lamb.

The way that people carry themselves, an overall aspect or presentation.

Discomfort after making a social error.

Occurs when people create highly favorable impressions of themselves and their intentions so as not to appear selfish.

The idea of face relates to the notion that one's presentation of self is a mask that people work to maintain in social situations, thus losing face is the result of a social mis-step that results in emotional pain or embarrassment.

The region surrounding a person that they regard as private.