Identify important developments of art and architecture during the Northern Renaissance in France.

Tutorial
what's covered
This tutorial covers the Northern Renaissance in France. By the end of this lesson, you’ll be able to identify and define today’s key terms, explain the influence of the Italian Renaissance and Mannerism on the architecture and art of France during the 16th century, and identify examples of artwork and architecture from this period. This will be accomplished through the exploration of:

big idea
French art and architecture of the 16th century was highly influenced by the Italian Renaissance, Mannerism, and the availability of Italian artists.

The art and architecture that you will be looking at today date from 1515 to 1547, which is the reign of King Francis I of France.

The architecture that you will examine today comes from three different places in France: Fontainebleau Estate, Chambord, and Paris. 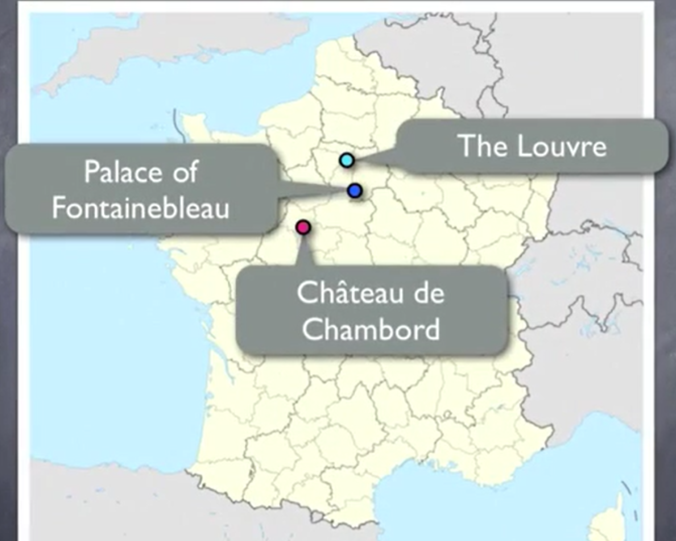 Francis I was a great lover and patron of the arts and architecture. His reign of over 30 years was quite eventful. France had gained considerable territories during and following the Hundred Years’ War with England, which preceded Francis I’s reign by about 70 years. It established the vast majority of the modern-day shape of France. The increase of French power was influential on the secular arts, following French Gothic, and architecture in France. It was an extravagance and glorification of the ruler’s authority that would continue until the French Revolution of the 18th century.

This portrait by the French artist Jean Clouet exemplifies the elegance, decadence, and depiction of authority favored by Francis I.

The portrait of Francis exceeds the borders of the painting. His puffy sleeves and elaborately detailed clothing accentuate the proportions of his body in relation to his head. His face and neck are flat, by comparison, and characterized by an overall lack of modeling of form. The smaller head on the body emphasizes the expensive and elaborate clothing, creating an overall regal aesthetic and formal quality to the painting.

The royal aesthetic carried over to architecture as well. Mannerism in Italy, in particular, was very influential on the architecture of the time.

3a. Palace of Fontainebleau
The Palace at Fontainebleau, or Chateau de Fontainebleau, is an example. It combines aspects of the Italian palazzo with those of the French Gothic. The French royal residences of this time changed the overall appearance of what a royal residence looked like. As opposed to the reinforced, fortress-like castle of medieval times, the new aesthetic favored the refined quality of the Italian palazzo, creating a distinctly French form of the palazzo called the chateau.

The interior was designed by two Italians and evokes the essence of the Mannerist style favored by the French court of the time. The use of painted and gilded stucco elements made its first appearance in French architecture at Fontainebleau; they were designed by Rosso Fiorentino. These were common but elaborate design elements later during the Baroque and Rococo periods.

Notice how the statues are also elongated in the Mannerist style.

hint
These statues are reminiscent of paintings such as Parmigianino’s “Madonna with the Long Neck,” shown below.

A castle or fortress and the residence or country home of the nobility, especially in France.

The exterior of the chateau, shown below, is perhaps the most glaring example of this blending. The lower portion evokes a sense of order, horizontal emphasis, and logical placement of elements. For instance, one would see the aligned windows in an Italian Renaissance-era palazzo. The upper region, though, with its Gothic-style heavy lanterns and spindles, evokes the verticality expressed so vividly in the French Gothic cathedrals from centuries past.

3c. The Louvre
The final example brings you to Paris, and is one of the best examples of 16th-century French style in architecture. The sacking of Rome in 1527 made available a large number of talented artists who were welcomed into the service of the French king. Prior to this, around 1516, Leonardo da Vinci came to the court at Fontainebleau at the invitation of Francis I, and brought with him a number of works of art, most notably the “Mona Lisa.” When da Vinci died in 1519, he left behind this famous painting, among others, which is now housed in the Louvre in Paris.

did you know
Although it’s now a museum, the Louvre began its life as a royal residence. Francis I began this renovation project to expand the facility as well as to update it aesthetically.

The west façade of the square court at the Louvre clearly depicts the strong influence of the Italian Renaissance design, with an emphasis on the horizontal. In a similar fashion to the Palazzo Medici, it’s comprised of three horizontal bands, each varying in its application of design elements. Yet somehow it maintains a cohesive sense of overall form.

The bottom is composed of a series of rounded, recessed Roman arches forming an arcade that creates a sense of solidity to the foundation. The mid-level windows are separated by pilasters, which are the flat, decorative column-looking elements, with every window alternating with either a rounded or a triangular pediment at its top. The upper level is the most decorative, and, coupled with the smaller windows, creates a sense of lightness that contrasts with a more robust-looking structure at the base.

think about it
Consider how architecture combines form and function. In this example, notice how Northern European elements are intermixed in the protruding pavilions and with the steeply slanted roofs, which are a functional design element. After all, the steep roofs are much better at dealing with snow and rainfall.

summary
Today you learned about the Northern Renaissance in France and how to identify and define today’s key terms. You learned about the reign of King Francis I of France and the subsequent influence of the Italian Renaissance and Mannerism on the architecture and art of the French court during the 16th century. Lastly, you learned how to identify examples of artwork and architecture from this period, by exploring architecture, such as the Palace of Fontainebleau, the Chateau de Chambord, and The Louvre.

A castle or fortress and the residence or country home of nobility, especially in France.