Or
Close Popup
+
4 Tutorials that teach Observational Studies and Experiments
Take your pick:
Previous Next

Differentiate between observational studies and experiments.

An observational study is a type of study where the researcher can observe but does not administer any treatment. Therefore, whatever would normally happen, the researcher has to allow it to happen.

Researchers can't change anything about the people or subjects they are studying. The researcher can record the variables of interest, but again, can't affect the study. People have to be allowed to do whatever it is they were going to do without interruption.

A type of study where researchers can observe the participants, but not affect the behavior or outcomes in any way.

There are two types of observational studies:

The year is 1929 and a cancer doctor has a suspicion that smoking may cause cancer. His cancer patients become his subjects, or participants, in his study. He asks his subjects, “Did you happen to smoke before you got cancer?” What he found was an overwhelming majority of his cancer patients did, in fact, smoke. Therefore, this doctor was the very first person to suggest a link between smoking and cancer. 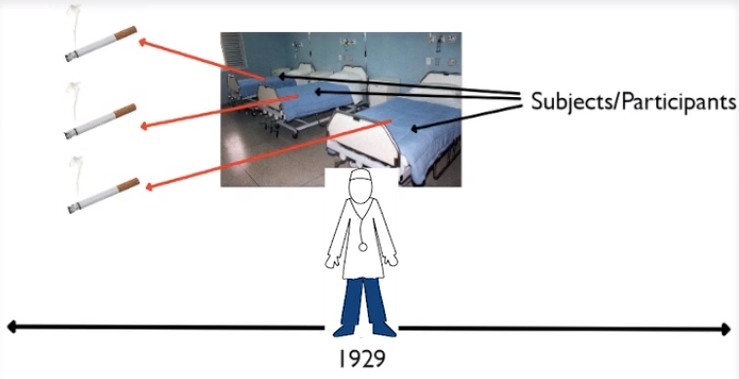 That inspired some new studies, one of which began in 1934. It dealt with several thousand doctors, so it was a physician’s smoking study. The reason doctors were chosen is that doctors are usually very diligent about following protocols, meaning that those who smoked would likely continue to smoke, and those who didn't smoke would likely continue not smoking. Also, doctors typically wouldn't drop out of a study. Notice in the image below, how some of these physicians smoked, and some of them did not. 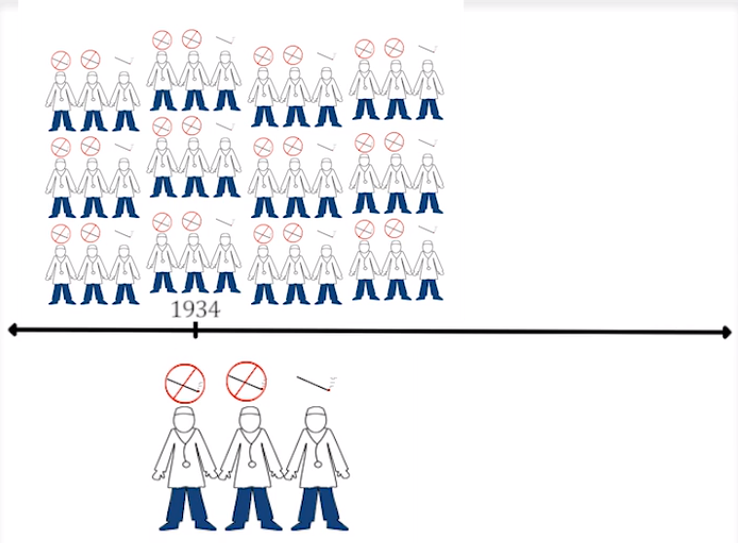 They did the study, and some of the doctors got cancer. Now, not every doctor who smoked ended up getting cancer, and not every person who got cancer was a smoker. However, what they found was that the vast majority of the time, it was the doctors who smoked that got cancer. 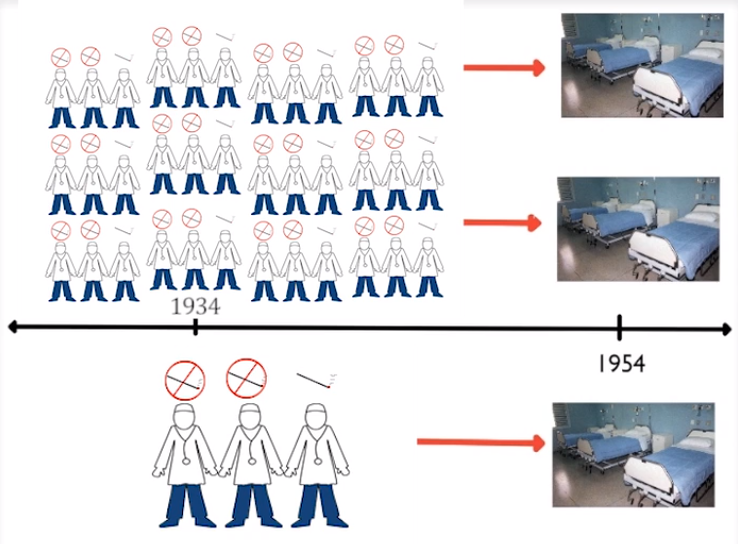 This study was conducted over a long period of time--a 20-year study. At its conclusion, this was the most convincing evidence that smoking had an effect on cancer. This was an example of a prospective study because it started with the doctors and followed them through to 1954.

A study that observes what happened to the subjects in the past, in an effort to understand how they became the way they are in the present.

A study that begins by selecting participants, tracking them, and keeping data on the subjects as they go into the future.

The people or things being examined in an observational study.

An experiment is a different type of study than an observational study. The differences will be covered in detail shortly, but essentially, the researchers are allowed to impose treatments on the participants. Treatments are administered and response to those treatments is measured. Because the researchers are the ones implementing the treatments and measuring the response, a cause-and-effect relationship between variables can be determined.

A type of study where researchers impose treatments on the participants or experimental units.

An animal or thing involved in an experiment.

In an observational study, the researcher observes the individuals but does not administer treatment. The researcher simply has to allow what would normally happen to happen. Again, they can record variables of interest, but not affect it in any way. The researcher is not necessarily an active participant in the study, other than observing and recording.

An experiment, on the other hand, is far more active on the part of the researcher. The researcher is creating the differences between the two groups, then determining whether or not there is a cause-and-effect relationship.

If you have a study that you'd like to do, but you can't perform it due to ethical or practical concerns, or it takes too much time or money, you can avoid those concerns or circumvent them by doing an observational study.

think about it
When trying to determine if cigarette smoking causes cancer, several observational studies have been conducted, but never a true experiment. Why would that be?

Well, it would be unethical to break people into groups and administer cigarettes to a group of people when trying to determine if it causes terminal illness. The same applies to alcohol consumption.

big idea
There are certain instances in which an observational study will be preferred over an experiment due to factors like time, money, and privacy, where it is unlikely people will divulge that type of information

summary
An observational study is a type of study where the researcher can observe but not influence the behavior of the participants, or subjects. A retrospective study involves looking back at behavior, while a prospective study involves gathering your participants and following them along as they live their lives. An observational study, though, cannot prove a cause-and-effect relationship

Conversely, in an experiment, a researcher can directly influence the subjects by applying treatments. Because the researchers are the ones implementing the treatments and measuring the response, a cause-and-effect relationship between variables can be determined. Terminology such as subjects and participants is important to know since it identifies individuals directly involved in the experiment. Animals may be directly involved in an experiment, but they are referred to as experimental units rather than subjects or participants.

Sometimes an experiment may be unethical, expensive, or too lengthy. In those cases, observational studies may be used, which allow a researcher to study occurrences in a natural setting without administering treatment of any kind.

A type of study where researchers impose treatments on the participants or experimental units.

An animal or thing involved in an experiment.

A type of study where researchers can observe the participants, but not affect the behavior or outcomes in any way.

A study that begins by selecting participants, then tracks them and keeps data on the subjects as they go into the future.

A study that observes what happened to the subjects in the past, in an effort to understand how they became the way they are in the present.

The people or things being examined in an observational study.