Understand some basic elements of funerary architecture of the Old Kingdom

(more)
See More
Tutorial
what's covered
The Old Kingdom in ancient Egypt has very notable architecture. From mastabas to pyramids, there were changes in architecture that took place during this time. In this lesson, you will learn about this evolution as well as the basic elements of funerary architecture. This lesson covers:

big idea
Pyramids and funerary complexes are important examples of Egyptian architecture from the Old Kingdom.

1. Period and Location: The Old Kingdom

In the timeline below, the Old Kingdom is highlighted. Notice that the Roman Republic’s founding (509 BC) is also marked for reference. 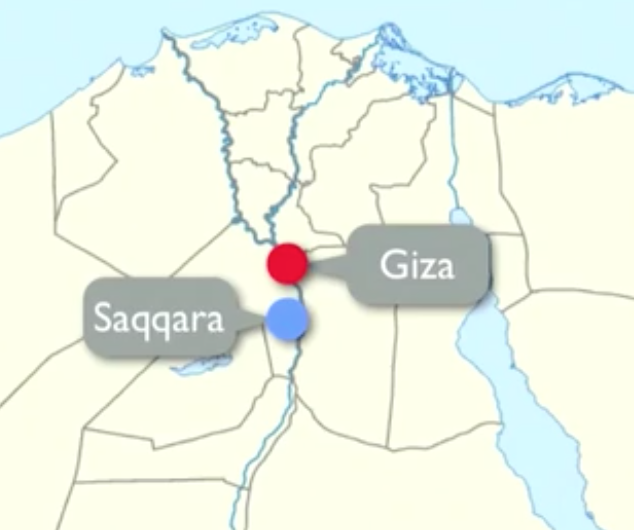 A large cemetery or burial ground, literally “city of the dead”

The mastaba is a stone or brick structure that is flat-roofed and has slanting sides. The burial chamber is underneath.

Here is a diagram of a mastaba: 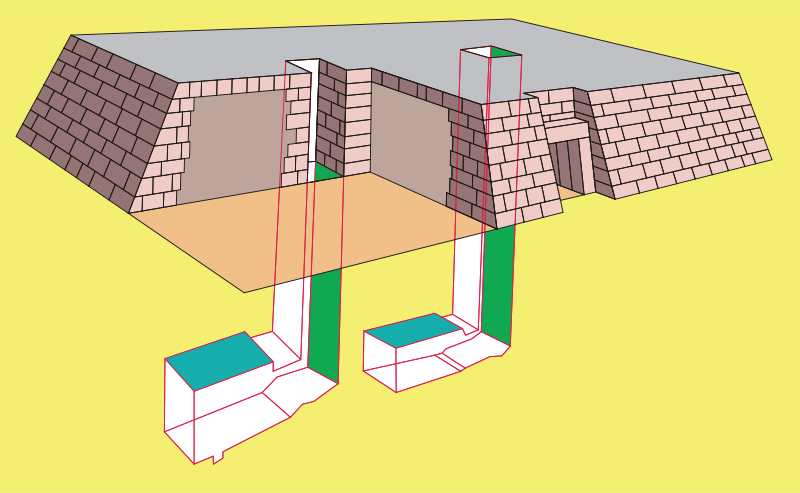 Notice the flat roof, the slanting sides, and the burial chambers underneath the structure.

The serdab is a room in which the ka statue resides. It is inside the tomb, and there are openings for the ka statue so it would not be completely enclosed in this structure. This was intentional to allow ritualistic communication to continue through the hole(s).

A type of Egyptian tomb, rectangular, brick or stone, flat-roofed with sloping sides built over a tomb and connected to it by a shaft

Used during the Old Kingdom, a cellar and a chamber in a tomb for the ka statue of a deceased person

Imhotep, a historical figure who lived during this time, had many roles, including high priest, physician, architect, artist, and royal administrator. Notably, he was one of the only individuals in history that was not a pharaoh to achieve divine status after his death. This is referred to as apotheosis.

Imhotep was the chief architect and right-hand man of Djoser, who was the pharaoh of the Third Dynasty. In fact, Imhotep is the first officially noted architect in history, and he designed the first known example of monumental architecture in Egypt, the funerary complex at Saqqara.

One interesting architectural element Imhotep used during this time was engaged columns. These are columns that partially reside in the wall. He also used fluting, which are vertical channels that run the length of the column. These are design elements that were seen again later in ancient Greek and ancient Roman architecture.

did you know
Are you familiar with mummy movies? If so, you might have heard the name Imhotep. He was the principal villain in many of these movies. Believe it or not, that is not a factual representation of Imhotep.

Step pyramids in ancient Egypt, while similar in appearance to Mesopotamian ziggurats, had a very different purpose. They were tombs and actually took on the form of a series of smaller mastabas stacked on top of one another. This is very similar to a stairway to heaven. The step pyramid itself appears to have been an intentional improvement on an earlier mastaba-only design.

It is important to understand the evolution of the Egyptian funerary tomb. If you take mastabas and stack them on one another, you get a step pyramid, which is like several mastabas of decreasing size stacked on one another. Finally, the true pyramid, much like a refined version of the step pyramid, has smooth, sloping sides. These sides symbolize the rays of the sun god Ra.

The mathematical calculations were amazingly precise, as the stones would have had to have been tapered gradually to meet at the very top in a precise point. They are true geometric pyramids, with a square base and four slanting triangles.

The reason for this particular shape is that the slanting sides may represent the rays of the sun emanating from a single source, the sun, at the top. The pharaohs were thought to climb the rays of the sun to join the sun god Ra, their principal deity. They are laid out east to west to follow the path of the sun as it travels east to west, which may be symbolic of a human lifespan, birth to death. There has been speculation that they also correspond to the stars making up the constellation of Orion’s Belt.

The interior of the pyramids was rather sparse. There wasn’t a lot of interior space, as large as they were. There were typically several access tunnels, with a few small rooms called chambers that housed the mummified remains and the relics.

Below is a picture of an actual step pyramid tomb.

The next image, below, is of the entrance to the complex at Saqqara. Notice the remains of the enclosing wall on either side. Take a look at the first column on the left. You can see how it’s embedded in the wall.

Unfortunately, due to looting over time, much of the treasures and artifacts have been taken from these pyramids. The best archaeological artifacts tend to come from tombs that were hidden or buried, such as the largely untouched tomb of King Tutankhamen, or King Tut, whom you will learn about in another lesson.

The complex at Saqqara was composed of architectural and design elements such as an entrance to the complex, the south tomb, festival complex, mortuary temple where the body would have been prepared, and the step pyramid, where it would have been entombed.

Probably the most recognizable funerary monuments in Egypt are the pyramids at Giza. Remember, Giza is roughly 30 miles north of Saqqara, just outside the modern-day city of Cairo.

Several of the structures found here are literally monumental feats of engineering. Included are the Great Pyramid of the Pharaoh Khufu of the Fourth Dynasty and two other pyramids, for the pharaohs Menkaure and Khafre.

Here is a picture of the remains of the pyramids at Giza. Menkaure, the smallest, is in the front.

Here is a picture of the Great Pyramid of the Pharaoh Khufu of the Fourth Dynasty. This is the largest of the pyramids at Giza.

The mastabas and serdab were both types of funerary architecture explored in this lesson, and Imhotep, a chief architect for the pharaoh Djoser, used many architectural techniques.

A type of Egyptian tomb, rectangular, brick or stone, flat roofed with sloping sides built over a tomb and connected by a shaft.

A large cemetery or burial ground, literally city of the dead.

Used during the Old Kingdom, a cellar and a chamber in a tomb for the ka statue of a deceased person.