Identify the purpose and main characteristics of different types of operating systems.

Tutorial
what's covered
Recall that the technological core of an information system is the computer. All computers consist of hardware and software working together to provide users with the ability to manipulate data. As computer hardware is categorized based on function, computer software can also be divided into categories based on function: operating systems and application software. In this section we will take a closer look at computer operating systems.

Our discussion will break down as follows:

1. What Is An Operating System 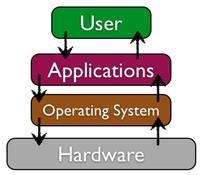 Operating systems facilitate communication between the user and the computer’s resources. When a user interacts with applications, the operating system manages access to the computer's resources, such as CPU, memory and storage, and peripheral devices.

Operating interface that allows a user to interact with the files and software on a computer.

did you know
Non-computer devices, such as a car or an ATM machine, have operating systems installed on them. For instance, if your car can display your average miles per gallon or tire pressure, that display has an OS running behind it.

Operating systems can be differentiated from one another by characteristics such as: if it offers a graphical user interface (GUI), if it can multitask, if it is multi-user, and if it is commercial or open-source. We will examine these characteristics in more detail below.

Early personal-computer operating systems were simple by today’s standards. For example, they did not provide multitasking and required the user to type commands to initiate an action. However, as computers have evolved, so have the characteristics of their operating systems.

User-Interface
The way an operating system allows a user to communicate with the computer, enter commands, access software, input data, and receive output or feedback, is defined by its user-interface. A user-interface can be either graphical or command line. A command line interface provides users with a prompt to type text commands. Examples of operating systems that fall into this category are Linux and UNIX.

Most operating systems today, however, provide a graphical user interface (GUI). A GUI provides a graphical interface that allows the user to issue commands, run programs, and manage files by using a mouse and/or keyboard input. Linux and UNIX also offer GUI capability. MS Windows and Mac OS are the most common GUI-based operating systems.

A user-interface that provides users with a prompt to type text commands.

Contains graphics and icons and is navigated with a mouse.

Early computers were difficult to program and required great attention to detail. However, many personal-computer enthusiasts immediately banded together to build applications and solve problems. These computer enthusiasts were happy to share any programs they built, as well as any solutions to problems they found. This collaboration enabled them to more quickly innovate and fix problems. Open-source software is free software that makes the source code available for anyone to copy and use. This encourages others to contribute to the future development and improvement of the software. The open-source movement has led to the development of some of the most-used software in the world, including the Firefox browser, the Linux operating system, the Apache web server, FreeBSD, and GNU.

Used to describe software that is free to users, and for which the source code is made available; users are encouraged to modify.

However, as software began to become a business, this idea of sharing everything fell out of favor, at least with some. This led to a new business model of restrictive software licensing, which required payment for software, a model that is still dominant today. This model is sometimes referred to as commercial (closed-source), as the source code is not made available to others. Examples of commercial operating systems are Microsoft Windows and Apple OSX.

Used to describe software that is not free to users nor is the source code made available for users to modify.

There are many arguments on both sides of the aisle for the commercial or open-source software. The table below explains some benefits for open-source and closed-source operating systems.

Source: Derived from Chapter 3 of “Information Systems for Business and Beyond” by David T. Bourgeois. Some sections removed for brevity. https://www.saylor.org/site/textbooks/Information%20Systems%20for%20Business%20and%20Beyond/Textbook.html

Contains graphics and icons and is navigated with a mouse.

Ability to allow multiple software processes to run at the same time.

Operating system's ability to allow more than one user to use the same computer at the same time and at different times.

Software that performs the task required to keep the system running and provides the main interface for the user.

Operating interface that allows a user to interact with the files and software on a computer.