Or
Close Popup
+
2 Tutorials that teach Optimal Choice
Take your pick:
Previous Next

Interpret the relationship between indifference curves and budget constraints to determine the optimal choice on a graph.

(more)
See More
Tutorial
what's covered
This tutorial will cover the topic of optimal choice, focusing on how to interpret the relationship between indifference curves and budget constraints to determine our maximum utility.

Therefore, how do we make the best choice to maximize our utility?

hint
Remember, utility is satisfaction; it is what we get out of something.

Our first key term, budget constraint, is defined as the graphical depiction of consumer income relative to the price of goods available.

Where the budget constraint touches the highest indifference curve available, the consumer is defined to be optimizing consumption, or getting the most utility.

Suppose Kim has a budget of $100 to spend each month on "fun." She must choose between going to the movies or ordering Chinese takeout, her two designated "fun for the month" activities.

The movies will cost her $20 each time she goes, between the ticket and snacks at the concessions stand, whereas the Chinese takeout will cost her $10.

Kim's budget constraint will list all of the possible combinations she can afford if she spends all $100 on these two activities every month.

Let's look at the equation first. Again, her budget is $100, and we will call Chinese takeout "Good X," and the movies "Good Y":

For instance, if she orders Chinese takeout two times, then $10X would equal $20. Then, she could solve for Y to figure out how many times she can go to the movies and still stay within her budget of $100.


Now, let's graph this equation, visually representing Kim's budget constraint for the month, where her budget is $100.

We will put trips to the movies on the y-axis and Chinese takeout on the x-axis. 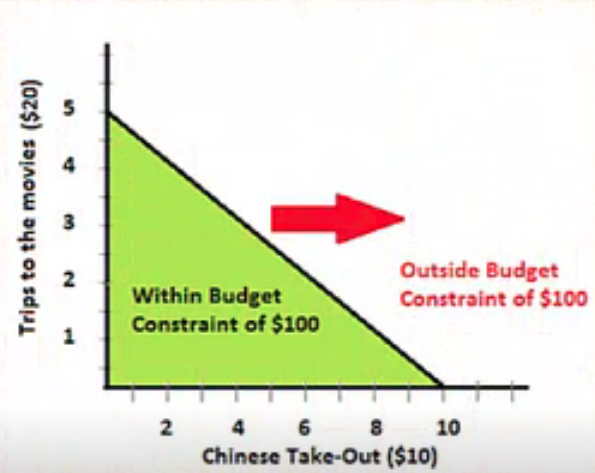 Notice the extremes for each option, which indicate that she can afford either:

However, most people would probably prefer some combination.

If she purchases in this green area, she is saving money, by not spending all $100.

She does not have the money to do anything outside of her budget constraint.

However, this by itself doesn't really tell us what combination she should choose, because we don't know what she prefers. Does she prefer Chinese takeout? Does she prefer the movies? Let's explore this idea a bit further.

Now, if Kim is in fact going to strive for utility maximization, this means she is achieving the highest amount of satisfaction given her budget constraint.

Let's put it all together. Here we have the same budget constraint, but now we have added a series of indifference curves. 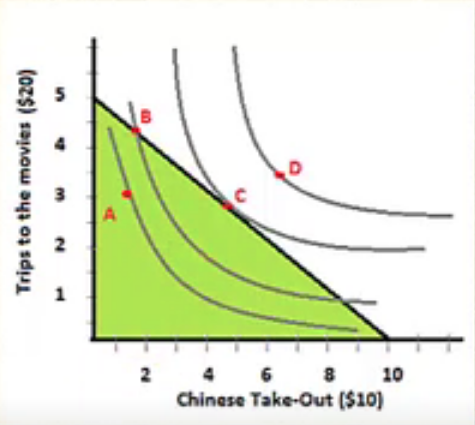 Well, we can rule out her purchasing at point A because that is inside her budget constraint, so she can definitely still increase her utility by spending more money and potentially gaining more trips to the movies and more Chinese takeout.

We can also rule out point D because she can't spend that money--it's outside of her budget constraint.

Therefore, should she stay at point B or point C, because they are both on her budget constraint? In either case, she is spending exactly $100.

So, by definition of indifference curves, Kim's utility is higher at any point along the third curve than along the second one.

Achieving the highest amount of satisfaction given a consumer's budget constraint

summary
We began today's lesson by briefly discussing consumer choices and the fact that consumers strive to make the best choice to maximize their utility. We learned about the concept of a budget constraint, including its equation and its expression in a graph. We learned how it all comes together by looking at a graph that combines the indifference curves with the budget constraint to show us the combinations of goods and services that will maximize our utility and help us make the optimal choice.

Goods and services purchased by a consumer that provides the highest level of utility possible.

Achieving the highest amount of satisfaction given a consumer's budget constraint.