Identify results of a given situation as Simpson's paradox.

Tutorial
what's covered
This tutorial will cover the topic of statistical paradoxes. Our discussion breaks down as follows:

Paradoxes are apparent contradictions in what you see versus what you expected to see. Specifically, the one that we're going to talk about in this tutorial is called Benford's Law, covered in the next section.

Statistics allows us to draw conclusions about things that we see. Sometimes, though, the phenomena that we see are counter to what we thought would happen. These seeming contradictions are called paradoxes. If we understand them better, we can improve as statistical thinkers.

Benford's Law, also called the First Digit Law, says that the first number of most any real-life data, including financial reports, follow a pattern with the number 1 being the most likely, 2 being the next most likely, and so on in a specific order.


People who try to steal identities are likely to use more 4's, 5's, and 6's, because they think those are the middle. In reality, it's the number 1 that's the most likely as a lead number.

Benford examined many different sets of data, including:


think about it
Ask yourself, if the lead number follows that law, then does that mean that the second digit must also follow that law? If you thought yes, then your intuition again led you astray. While the first digit follows Benford's Law, the second digit does not.


As you can see in the image above, the second digit is approximately equally likely to be any of the numbers 0-9. There is a slight favoring of the lower numbers, but all are about 10%. The second digit has an equal frequency.

A law that shows that most of the numbers that are published, regardless of topic, begin with smaller numbers, and very few of them lead with larger numbers. The most common first digit is 1; the least common is 9.

The reason for a phenomenon like the one you saw in the above examples has to do with exponential growth, which looks like this: 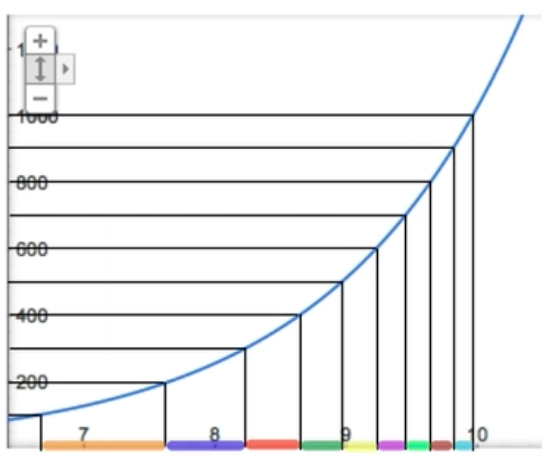 There are many kinds of paradoxes, and Simpson's Paradox is just one of them. Simpson’s Paradox is a relationship that's present in groups but reversed when the groups are combined.

A very famous example of Simpson’s Paradox took place in 1973. That year, UC Berkeley had a sex discrimination lawsuit filed against them that asserted that UCB was favoring men over women substantially in the admissions process for their grad schools. Here is the data:

The difference between 37% and 50.3% is huge, which is why the lawsuit was filed. To see exactly where the women were being discriminated against, the lawyers looked into the admissions by department. You would expect that there would be a large discrepancy in certain departments. For this tutorial, we will look at the data for two departments, which we are calling the Engineering and English (though the true numbers within these departments may have been different in the real case).

Women were accepted at higher rates to the Engineering and English departments, but much lower overall. Examining how the men's application rates were distributed, their 63% was weighted for a lot more into the weighted average of admissions rates versus the 68% for the women.

Only 25 of the 400 applicants to the Engineering department were women. That's not very many. Therefore, that 68%, even though it's a high percentage, doesn't count nearly as much in the weighted average as the 34.9% does. So, the 63% is weighted heavily for the men versus the 68%, which is weighted hardly at all for the women. This is why you see that reversal of association.

summary
A paradox is a seeming contradiction between what you think should happen versus what's actually happening. The First Digit Law, which is Benford's Law, is one of these paradoxes. We thought that we would find a uniform distribution among the first digits of certain numbers that we see, but 1 is a much more common lead number than any other. Not all numbers occur with the equal frequency as the lead digit, which is related to exponential growth. Simpson's Paradox is an association that the data show when you group that data in specific ways, causing the association to be reversed when the groups are combined. There are several paradoxes like this, of which Simpson's paradox is just one.

A law that shows that most of the numbers that are published, regardless of topic, begin with smaller numbers, and very few of them lead with larger numbers. The most common first digit is 1, the least common is 9.