Or
Close Popup
+
Previous
2.5 Think About It: Is Taxation Un-American?
Next
3.2 Choosing Sides in the American Revolution
Path to Revolution
The Road to Revolution: 1600 - 1783
0
of 0 possible points

Recognize the circumstances that characterized the beginning of the American Revolution.

(more)
See More
Tutorial
what's covered
This tutorial examines the critical period before 1776, when colonists debated the proper response to the Coercive Acts and British intimidation. The Continental Congress was a direct challenge to parliamentary authority in the colonies, but it would be a mistake to assume that there was overwhelming support for separation from the British Empire and the creation of a new, independent nation.

The people of Massachusetts, as well as many other colonists, would not back down in the face of the Coercive Acts. Disaffection, or the loss of affection toward King George III and Parliament, increased throughout 1774 and 1775. Many colonists believed they had to take action in response to the Coercive Acts. The result was the organization of a Continental Congress, which included representatives from across the American colonies.

After the passage of the Coercive Acts in 1774, committees of correspondence and the Sons of Liberty issued warnings that the Acts would restrict the liberty of all colonists, not just urban merchants and laborers. In Massachusetts, resistance-minded colonists continued meeting in their assemblies even though the Massachusetts Government Act had shut down the colonial government. Most importantly, in September 1774, a Continental Congress (the First Continental Congress) convened in Philadelphia to discuss the colonial response to the Coercive Acts.

A colonial legislature consisting of elected representatives from twelve colonies.

At first, the representatives did not agree on an appropriate response to the Coercive Acts.

Joseph Galloway of Pennsylvania proposed the creation of a Grand Council that, similar to Parliament and the Prime Minister, would be supported by a royally-appointed President General who represented the Crown’s authority. However, radical factions within the Congress, argued for complete separation from Great Britain.

By October 1774, the Congress adopted resolutions that demanded repeal of the Coercive Acts, and agreed to a non-importation, non-exportation, and non-consumption boycott of all British goods until Parliament met this demand. To enforce the boycott, the Congress created a Continental Association, which served as an umbrella group for local inspection and observation committees.

The Congress also reaffirmed colonial affinity towards the crown by sending a petition to King George III. It referred to George III as “Most Gracious Sovereign” and to themselves as “inhabitants of the English colonies in North America” and “inhabitants of British America.” This indicated that independence was not on the minds of most representatives. They considered themselves English citizens who were attempting to gain the King’s support in the struggle against Parliament.

Despite its attempt to persuade King George III, some of the other actions of the Congress indicate that the colonies were gradually moving toward the creation of their own government. One of the provisions agreed to by the Congress was that it would meet again in one year to mark progress. This implied that the Congress could become an elected government. The Congress also recommended that the colonies raise militias, in case the British responded to the boycott of British goods with force. By taking these steps, the First Continental Congress established the foundation for a colonial government in opposition to royal authority.

2. The Imperial Reaction and Colonial Response

Just as colonists reached new levels of organization and resistance, the British increased their efforts to impose their authority.

The British dispatched General Thomas Gage to Boston to restore law and order. He arrived in May of 1774, accompanied by several regiments of British troops, and took control as the new royal governor. By September, delegates from Boston and the surrounding area convened illegally to reject the Coercive Acts and call for the raising of local militias. Their actions, combined with the resolutions issued by the Continental Congress a month later, signaled a rejection of the royal government in Massachusetts.

Both sides began to prepare for conflict in New England by turning their attention to weapons and gunpowder. General Gage stationed 3,500 troops in Boston, and ordered periodic raids on towns where guns and gunpowder were stockpiled. Boston became the headquarters of British military operations, and many residents fled the city.

Gage’s actions led to the formation of local militias that could mobilize at a moment’s notice. These minutemen willingly confronted British soldiers who searched the New England countryside for arms and ammunition. In one instance, General Gage seized munitions in Cambridge and Charlestown, but when he arrived to do the same in Salem, his troops were met by a large crowd of minutemen and had to withdraw, empty-handed.

Colonial militias prepared to mobilize and fight the British at a moment’s notice.

Imperial reactions to colonial resistance, and the colonists' responses to those reactions, were spiraling out of control. New England appeared to be on the brink of war.

As General Gage discovered that the colonists were storing gunpowder in Concord, instructions from London arrived, ordering the arrest of Samuel Adams and John Hancock, two prominent members of the opposition. On April 18, 1775, Gage ordered 700 British soldiers to leave Boston and search the countryside for opposition leaders and military supplies.

did you know
Riders from Boston notified nearby militias of Gage’s plan. Paul Revere was one of those riders, but the British captured him so he never completed his mission. Henry Wadsworth Longfellow memorialized this event in his 1860 poem, “Paul Revere’s Ride,” incorrectly implying that Revere had made it all the way to Concord.

On the morning of April 19, the British troops overcame colonial resistance at Lexington, but were turned back at Concord and forced to endure a long, bloody retreat to Boston. Over 4,000 minutemen took part in these clashes, opposed by roughly the same number of soldiers. 73 British soldiers and 49 colonists died. An attempt to display the superiority of the British Army had led to bloodshed that started a war.

British soldiers in Boston found themselves under siege by colonial militia. In May of 1775, cannon captured from Fort Ticonderoga in New York strengthened the siege. The British forces in Boston were isolated in the city and unable to control the countryside.

4. Popular Perceptions of Lexington, Concord, and the British Retreat to Boston

The battles of Lexington and Concord are central to the mythology that surrounds the American Revolution. These perceptions (and misconceptions) started early. For instance, explore the images below, keeping in mind the five Ws (who, what, when, where, and why). These images were created by printmaker Amos Doolittle in 1775. They are the only contemporary images of the first battles between American colonists and British soldiers. 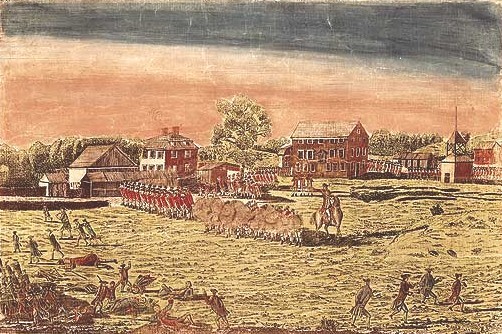 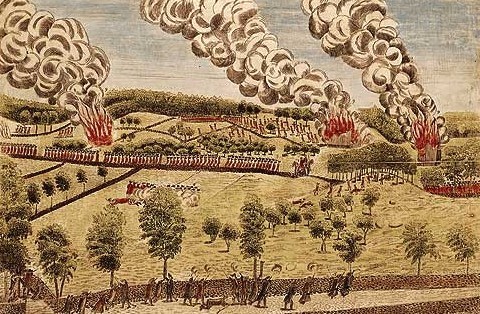 think about it
How do the images portray the colonial resistance at Lexington and Concord? How do they portray British soldiers? With answers to these questions in mind, can you come to any conclusions about the artist’s agenda and the audience for these images?

Although Doolittle produced these images shortly after the fighting at Lexington and Concord, they may not be accurate because of his agenda or the audience to which he was appealing. In his depiction of the Battle of Lexington, the colonists appear disorganized and are running from British fire. However, as you have read, the Massachusetts colonists were well-prepared to confront the British at a moment’s notice. The colonists may have returned fire, or even fired first, at Lexington.

The second image contributed to the myth that the British marched in neat columns while colonial soldiers wisely used trees, walls, and other objects to fight from cover. However, General George Washington spent much of the War for Independence striving to create a disciplined, professional army that could stand up to the British in battle.

5. Responses, Reactions, and a Path to Revolution

On July 8, 1775, a Second Continental Congress approved the Olive Branch Petition. It restated the colonists' loyalty to King George III by referring to themselves as his "faithful subjects", and went on to accuse his ministers of poisoning relations between the crown and the colonies. The petition asked King George III for relief, and concluded by praying for his health.

A petition issued by the Second Continental Congress that reaffirmed the colonies’ loyalty to King George III. He rejected the petition and declared that the colonies were in a state of rebellion.

The King was not persuaded by the declarations of loyalty included in the petition. From his perspective, the colonies were in disarray: order must be imposed. While many colonists believed that the king was being misled by corrupt officials and Parliament, he believed that a handful of revolutionaries were leading the majority of colonists astray. He was also convinced that colonial opposition would crumble if his government exhibited determination against the resistance.

On August 25, 1775, King George declared that the American colonies were in rebellion against the Crown. He hired Hessian mercenaries — professional German soldiers — to subdue the unruly colonies. Many colonists were stunned by the king’s reaction. The growing, seemingly-irreparable breach in relations between Great Britain and the American colonies opened a path to revolution.

Professional German soldiers hired by the British government to suppress the American Revolution.

summary
The American Revolution was not inevitable. Rather, it was the product of a series of imperial regulations, the colonial responses to the regulations, and imperial reactions to those responses, that gradually widened divisions between Great Britain and the American colonies. By 1774-1775, the establishment of a Continental Congress, and open violence between colonial militiamen and British soldiers in New England, damaged relations beyond repair and created the opening for revolution.

A petition issued by the Second Continental Congress that reaffirmed the colonies’ loyalty to King George III; the king rejected the petition and declared the colonies in a state of rebellion

The Coercive Acts are introduced.

The First Continental Congress endorses a full boycott of all British goods.

The Battle of Lexington and Concord are central to the mythology that surrounds the American Revolution.

The Olive Branch Petition is sent to King George III.