Differentiate between the functions of the somatic and the autonomic nervous systems.

Tutorial
what's covered
This tutorial will cover the peripheral nervous system and its component parts. Our discussion breaks down as follows:

The peripheral nervous system is the part of the nervous system that extends out from the brain and spinal cord to the rest of the body. Carrying motor and sensory information, it controls voluntary as well as involuntary behaviors and actions in the body.

The peripheral nervous system is divided into two parts: 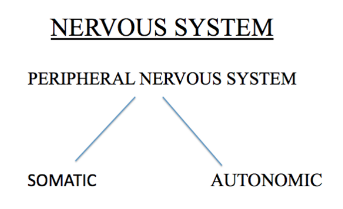 The somatic nervous system includes all of the nerves that connect to the sense organs and the skeletal muscles within the body. It controls all of the voluntary behavior and the motor neurons, which help to move the body. These motor neurons allow for actions, like drawing, jumping, running, and anything that we control directly.

Motor neurons can also control involuntary reactions, those called the reflex arc, which are simple, automatic responses to stimuli in the world.

When you go to the doctor's office and they hit your knee to see if your knee reacts very quickly, it's not an action that you necessarily control. The stimuli, the hitting of the knee, sends a reaction--not directly to your brain, but rather just to your spinal cord. The spinal cord is where reflex arcs are controlled. Then, that response is sent right back to your leg more quickly than if it had to go directly to your brain, and this is what allows your knee to give a quick, reflexive jerk.

Neurons that send information to brain from sense organs

The autonomic nervous system includes all of the nerves within the rest of the body that connect to the internal organs. They control all of the internal involuntary body functions like breathing, which we can control voluntarily but that generally is something that we do automatically, outside of our control. These nerves also control functions like heart rate and digestion.

hint
The name itself, "autonomic," looks a little bit like the word "automatic", which may help you remember that this system is responsible for automatic, involuntary reactions. 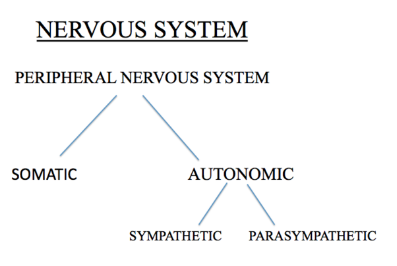 The sympathetic nervous system controls any body responses that are related to fight or flight. This is a protective response that kicks in when you feel like you're in danger.

The sympathetic branch of the autonomic nervous system is responsible for the following responses:

Controls body responses related to “flight or fight” response, when feel like we are in danger

The parasympathetic branch of the autonomic nervous system:

Suppose someone is driving too close behind you and honking the horn. Once they turn off, you take a deep breath and your hands are no longer sweaty. This is a result of the parasympathetic nervous system.

Helps to maintain normal body functions and calm it down when excited by the sympathetic nervous system.

Neurons that send information to brain from sense organs.

Controls body responses related to “flight or fight” response, when feel like in danger.