Plato vs. Aristotle: The Mathematician or the Biologist

Tutorial
what's covered
Plato and Aristotle, teacher and student, are two of the most influential thinkers in history. Their systems of metaphysics are extremely different in some ways, but they have important commonalities as well. In this tutorial, we will highlight their similarities, then contrast their differences.

This tutorial examines the similarities and differences between the philosophies of Plato and Aristotle in two parts:

At first, it may seem that Plato and Aristotle, the mathematician and the biologist, took radically different approaches in searching for the truth. However, this is usually the result of over-emphasizing their differences. It would be surprising if Plato and Aristotle were completely opposed in all of their beliefs, since Aristotle studied under Plato at the Academy for 20 years. Clearly, Aristotle found the study of Plato’s philosophy to be a good use of his time.

To identify their significant similarities then, we must understand that Plato taught Aristotle traditional philosophy. As a result, there are more similarities in their views than differences. Those who study (and teach) philosophy — as both of them did — pursue truth, above all else.

did you know
When Aristotle criticized or disagreed with Plato in his writings, he sometimes prefaced his criticism with a reminder that Plato taught him to value truth above all else, including friendship. Since Plato was also a philosopher, he would have approved of Aristotle's reminder.

Plato and Aristotle agreed that we must pursue truth by using reason and logic, rather than passion, emotion, and bias.

Both of them were metaphysicians, who proposed metaphysical entities which grounded the known world. For example, both Plato and Aristotle were realists with respect to essences. They maintained that essences existed, and that they were genuine truth-grounding entities.

However, not all philosophers believe this. Nominalists, for example, deny that essences exist in this way. Instead, they maintain that “essences” exist in name only, as linguistic coincidences, or that they are determined by biology, not metaphysics. Nominalists claim that what makes a just act just is that humans have defined what justice means. Acts which satisfy the definition's criteria are just acts.

The work of Plato and Aristotle shares additional metaphysical commonalities. For example, their accounts of the cosmos considered notions like cause-and-effect metaphysically, rather than scientifically (recall that this is why we did not identify Aristotle as a complete empiricist). They also used metaphysics to explain how entities in the world should be. These points continue to be debated by philosophers, but Plato and Aristotle did not disagree on them.

2. Their Main Points of Disagreement

The primary differences between the philosophies of Plato and Aristotle are differences within metaphysics and epistemology. Most of them are related to Plato’s Doctrine of the Forms, a doctrine that Aristotle rejects almost completely.

Remember that Forms are Platonic essences. As mentioned above, both Plato and Aristotle believed that essences exist, and that they are the grounds for truth. Plato’s essences are Platonic Forms — real, metaphysical entities that exist in a non-physical realm. Individual entities are who or what they are because of their participation in the relevant Form. For example, consider the Form of Humanity. It is the human essence, which determines what it is to be a human. It represents humanity in its truest sense. Human beings are human because they participate in (and are, therefore, imperfect imitations of) the Form of Humanity.

Although Aristotle agreed that humanity is a genuine entity (a substance in Aristotle’s terminology), it is not a Platonic Entity. First, Aristotle maintained that humanity was not located in Platonic Heaven, but in every individual human being. One human is different from another, not because they are both imperfect copies of a perfect Form of Humanity, but because they are composed of different matter.

Another important difference between Plato and Aristotle regarding Forms is an ontological point. (Recall that ontology is the branch of metaphysics that examines the nature of being.) In Plato's view, the Form of Humanity (and, therefore, the human essence) exists whether or not there are any individual humans. Aristotle believed that, in the absence of individual humans, there is no humanity: there is no longer a human essence. How essences exist was an area of significant difference between the two thinkers.

The “what it is” of any given thing.

Remember that essences ground truth. Therefore, where and how essences exist determine the way we come to know truth. These metaphysical differences lead to important epistemological differences. Aristotle believed that essences are in the world. In order to learn the true nature of humans, we must examine individual humans and identify their essential features. Aristotle searched for truth empirically: by examining the world.

Plato maintained that essences exist independently of the world, in a metaphysical realm, a world behind the world. Therefore, knowledge of things as they truly are requires us to go beyond the changing realm of appearances and contemplate the unchanging realm of the Forms. This is a rationalist approach.

For example, Plato’s ethics begins with a contemplation of the nature of goodness and justice. Aristotle’s account of ethics begins biologically, with a consideration of human physical characteristics. 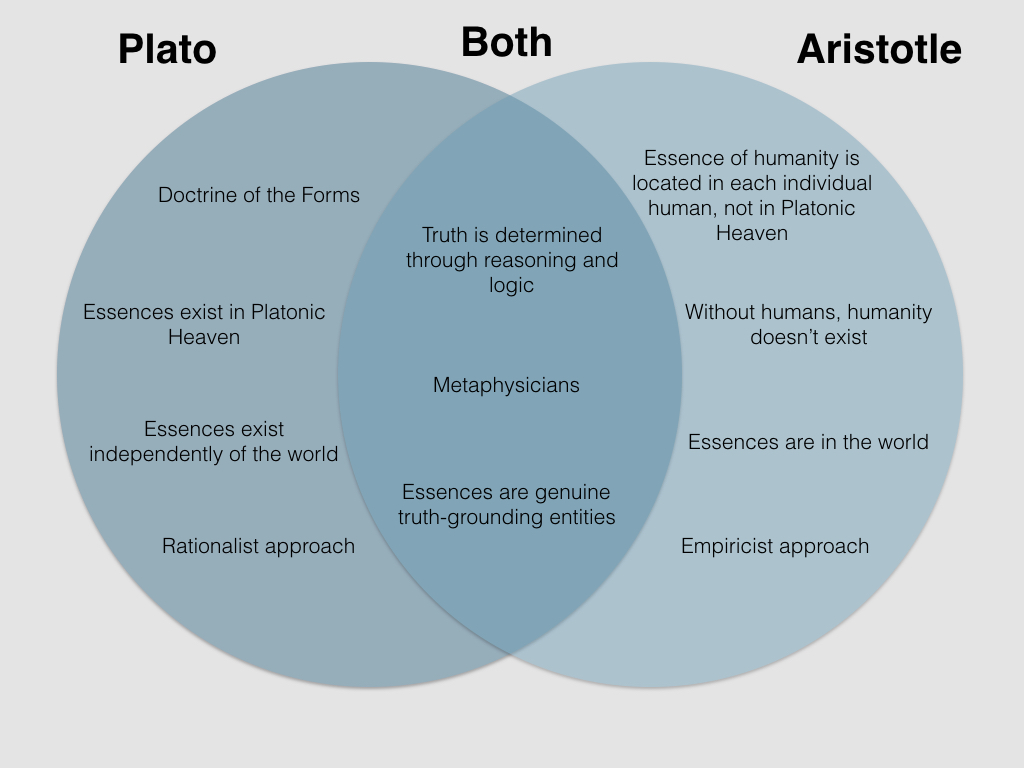 think about it
Whose approach to philosophy seems better, Plato’s or Aristotle’s? Here are a few questions that may help you to decide:

summary
Plato and Aristotle are philosophers who committed their lives to realizing truth through reason. Although both of them posited essences as genuine metaphysical entities, their accounts of metaphysics led to very different metaphysical, epistemological and methodological results. Most of these differences involve the ontological status of essences. Plato says that essences exist outside of, and are independent of, particulars. Aristotle maintains that they are within particulars, and only exist if some of the particulars do.
Terms to Know

The “what it is” of any given thing