Or
Close Popup
+
2 Tutorials that teach Posting to the General Ledger
Take your pick:
Previous Next

Posting to the General Ledger

Determine the accounts and amounts for a general ledger entry.

Now we will review some examples of general ledger transactions. Suppose you purchase $10,000 of equipment, for cash. This will involve a cash account, since you are paying for the equipment, as well as an equipment account.

Here is the ledger with its respective columns. Remember, each account is going to have its own ledger. The cash account has that unique identifier--1001--which comes from the chart of accounts. The date is reflected, as well as the reference from the general journal. Because you are paying cash, it's an asset; your cash is going down, so you're going to credit it. There will be a $10,000 balance in cash.

You also have equipment that you are purchasing. In the ledger, you'll see the same date and same reference. Since it's an asset and it's going up, you're going to debit your equipment. Therefore, equipment will also have a $10,000 balance. 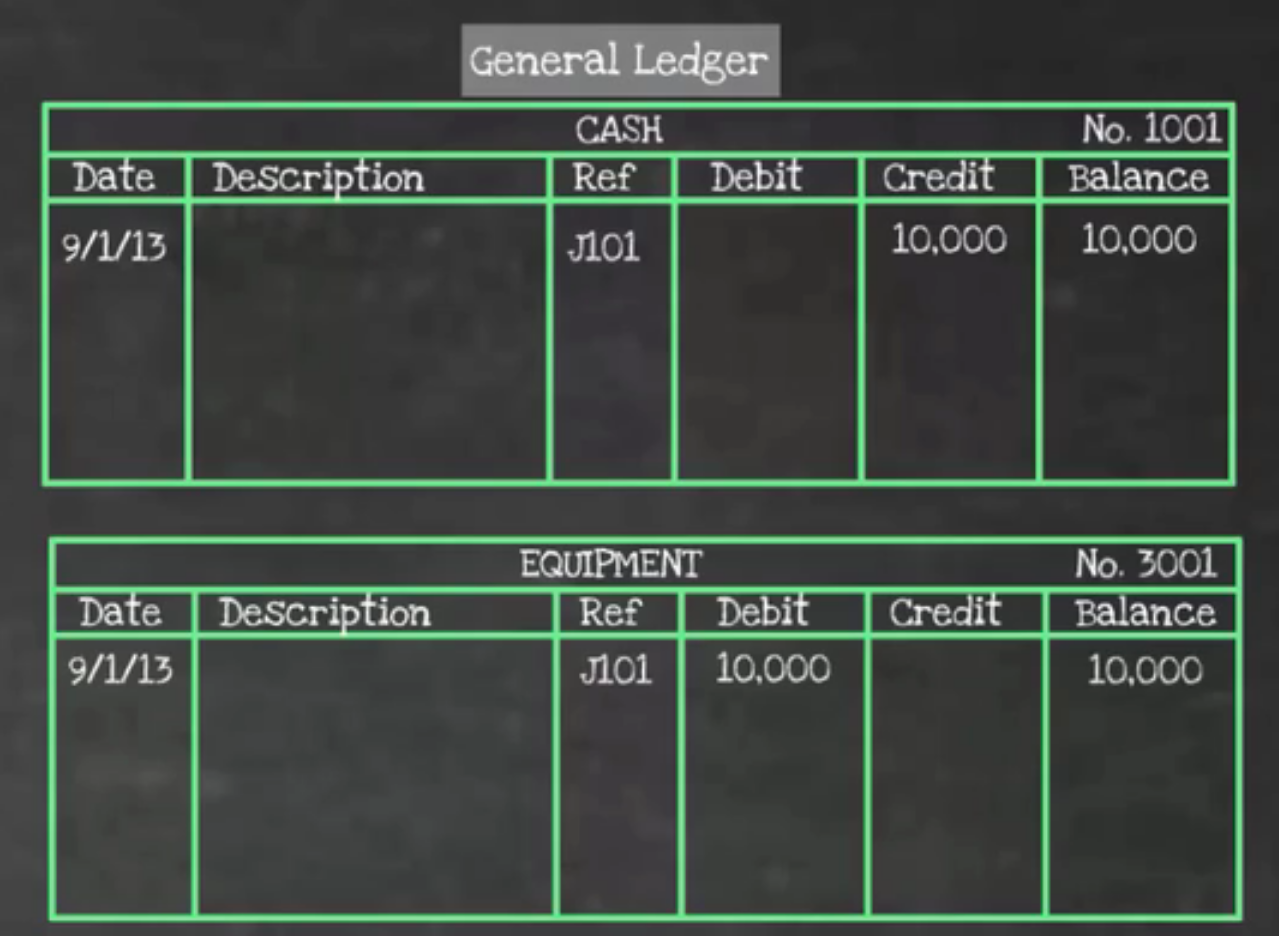 The second transaction involves a purchase of $10,000 of equipment, on account. The accounts involved are equipment and accounts payable. The first ledger shows equipment--same date, same reference (from the general journal). Since your assets are going up, you're going to debit equipment, so there will be a $10,000 balance. 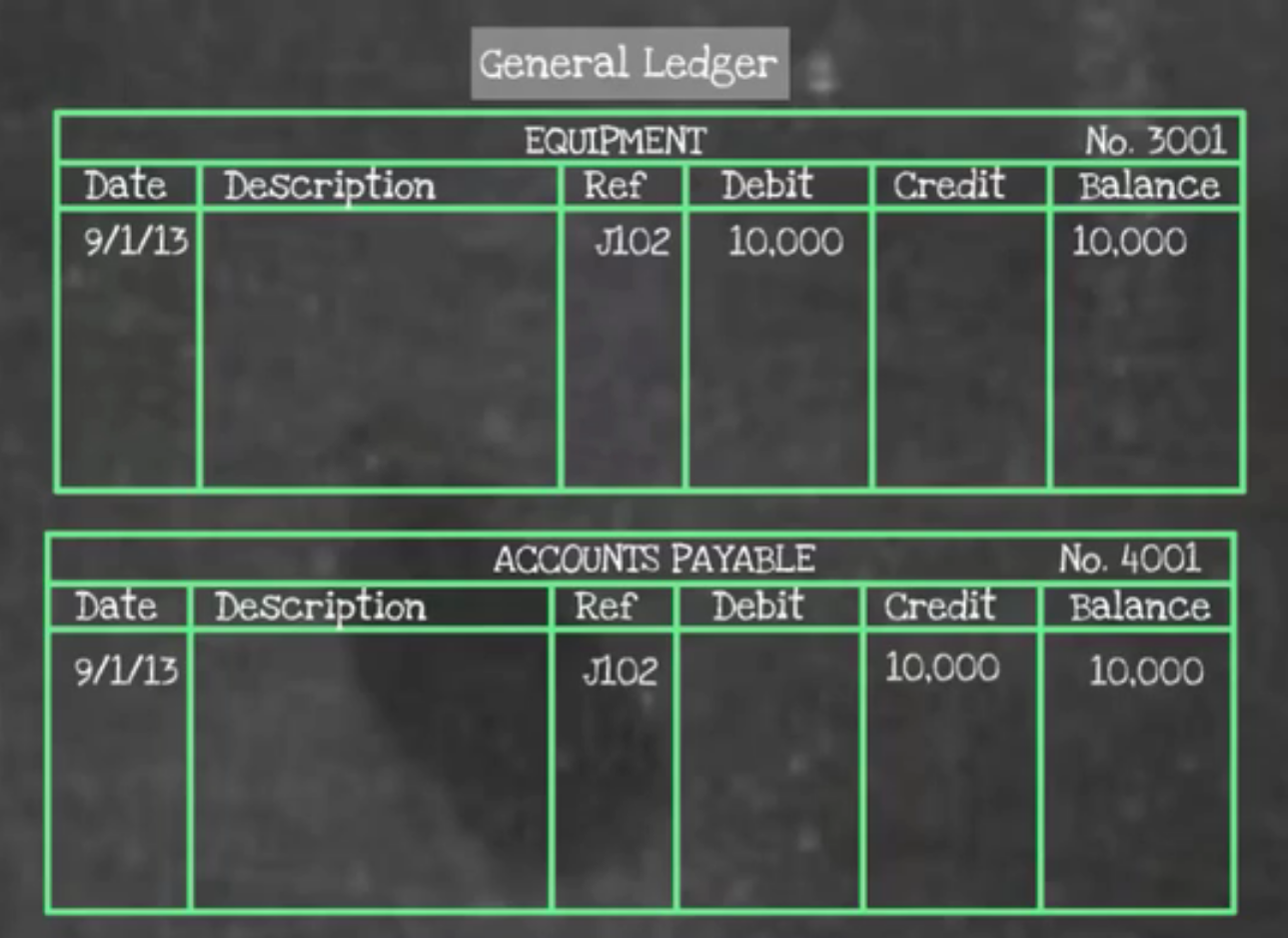 Let's take a look at the ledgers, starting with accounts payable. You purchased that equipment on account, so you are starting with that $10,000 credit from before. Now, however, you are making a payment. You're making the payment on the same date, and note your journal entry reference. Since you are making a payment, your liabilities are going to go down. Liabilities are decreased with debits, so you have a $5,000 debit to accounts payable, which makes the balance in your accounts payable $5,000. Note the rolling balance concept illustrated within the general ledger.

Now it's time for the cash ledger. Check the journal entry reference. Since cash is an asset, and it's going down, there will be a $5,000 credit to your cash account, leaving a $5,000 balance. 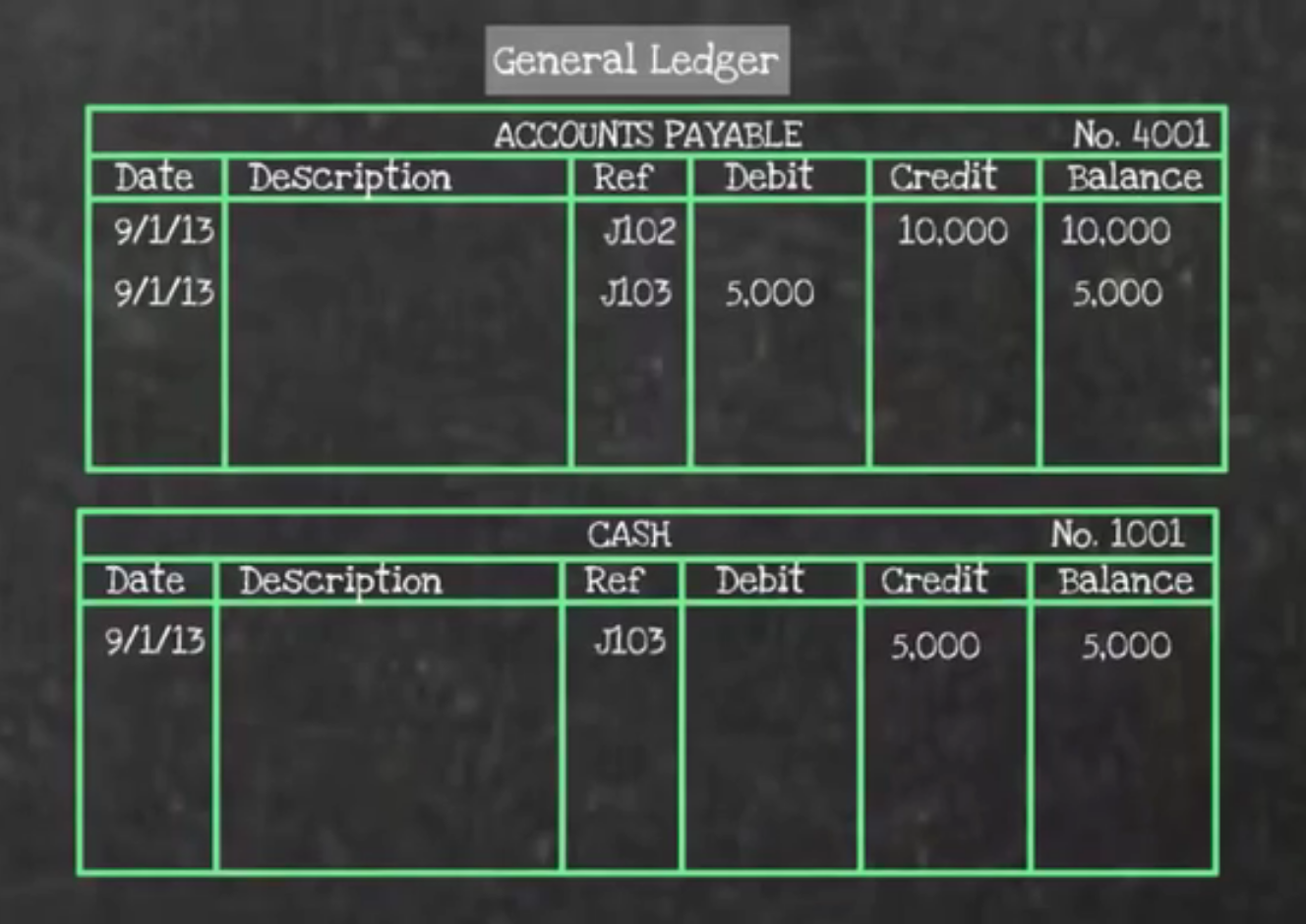 Now you can see that your balance in your accounts payable is zero. Since cash is an asset and it's going down--because you're making a payment--you credit your cash account and there is a $10,000 balance. 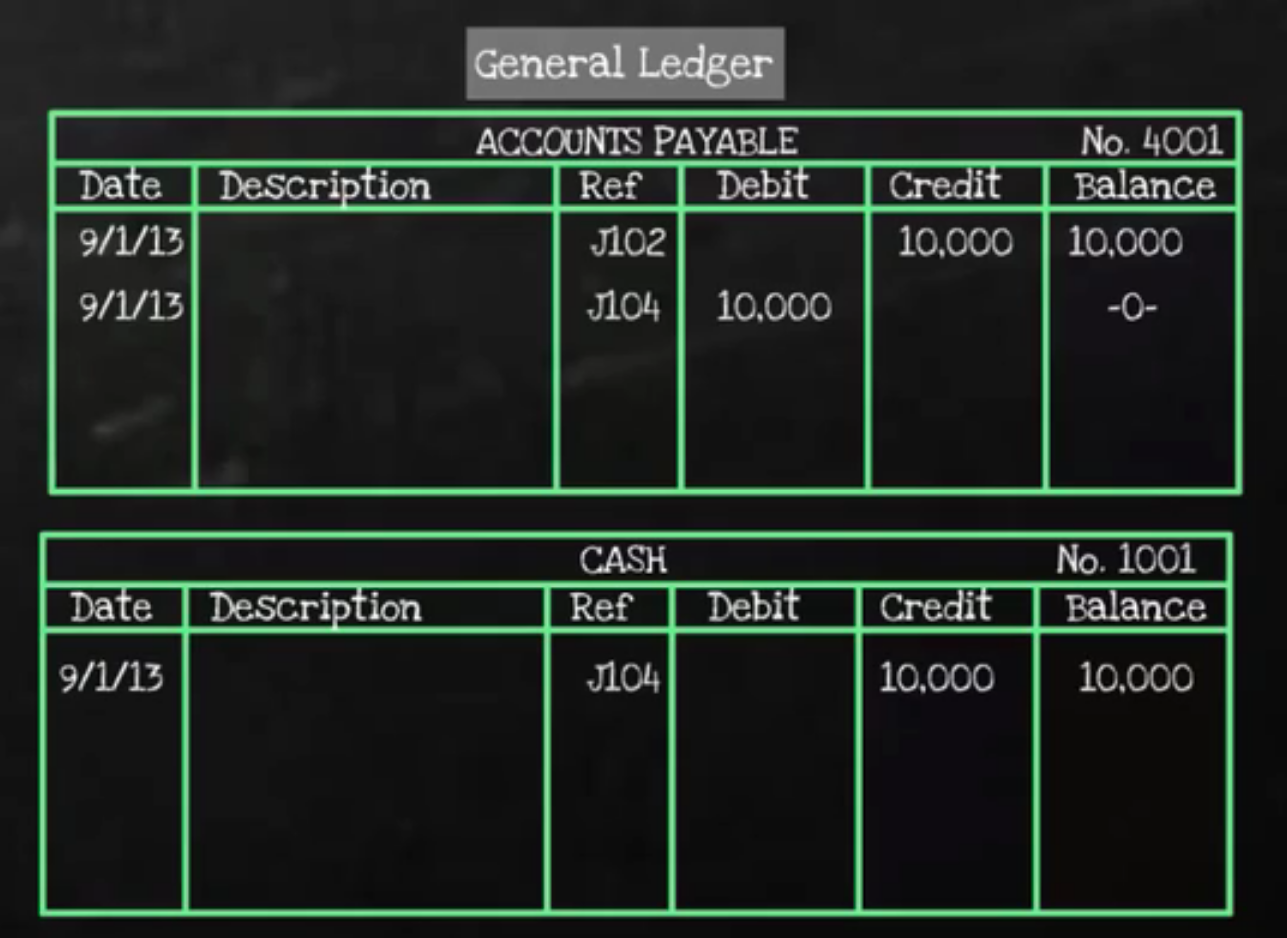 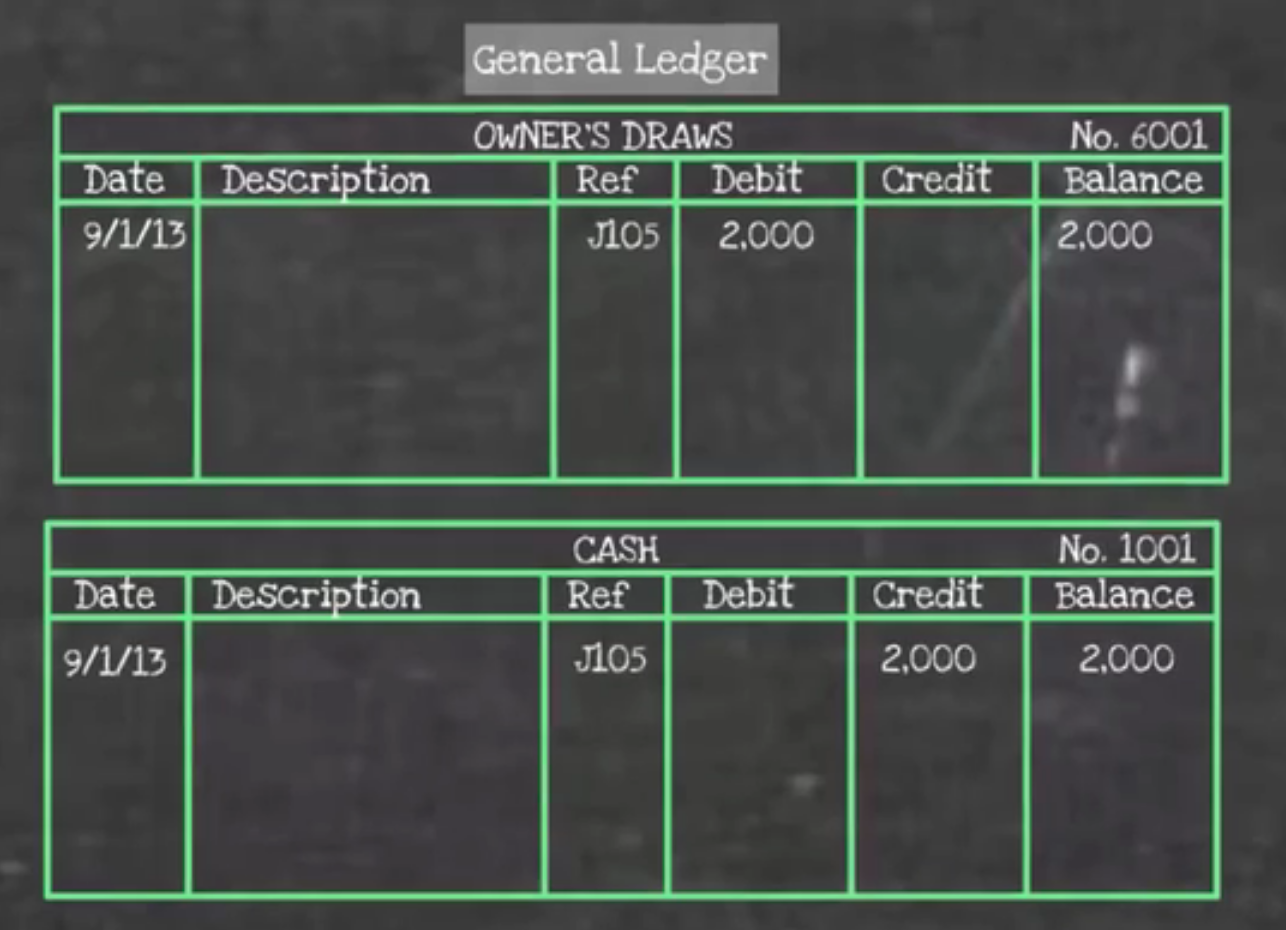 You also have deferred revenue for services that you have received payment for but haven't performed yet. Deferred revenue is a liability, and those are increased with credits, so you're going to put that $20,000 in your credit column, leaving a $20,000 balance in your deferred revenue. 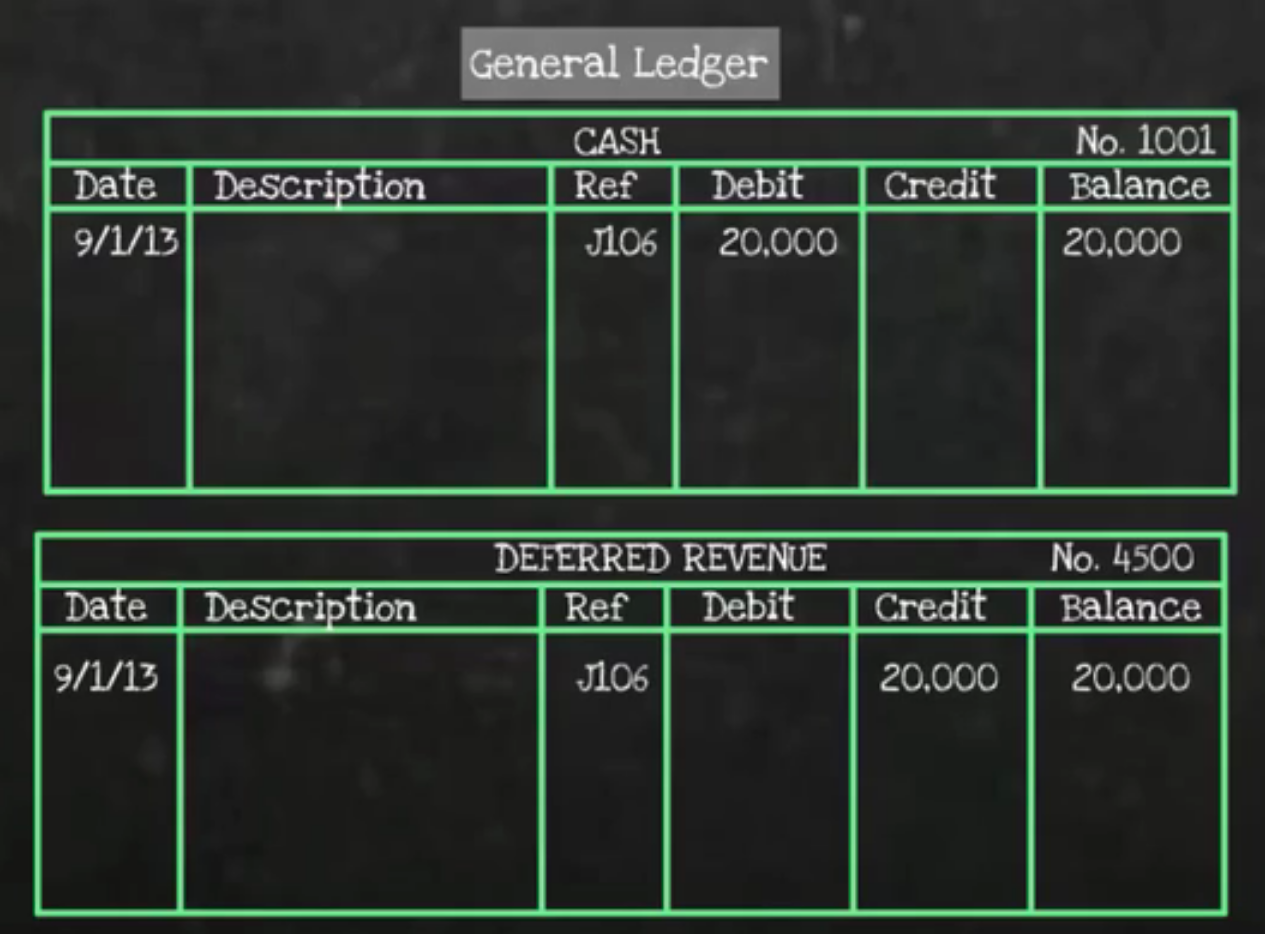 Next, cash is an asset, and since it's going down--because you're paying for prepaid expense--there is going to be a credit to your cash of $1,000, leaving a $1,000 balance in cash. 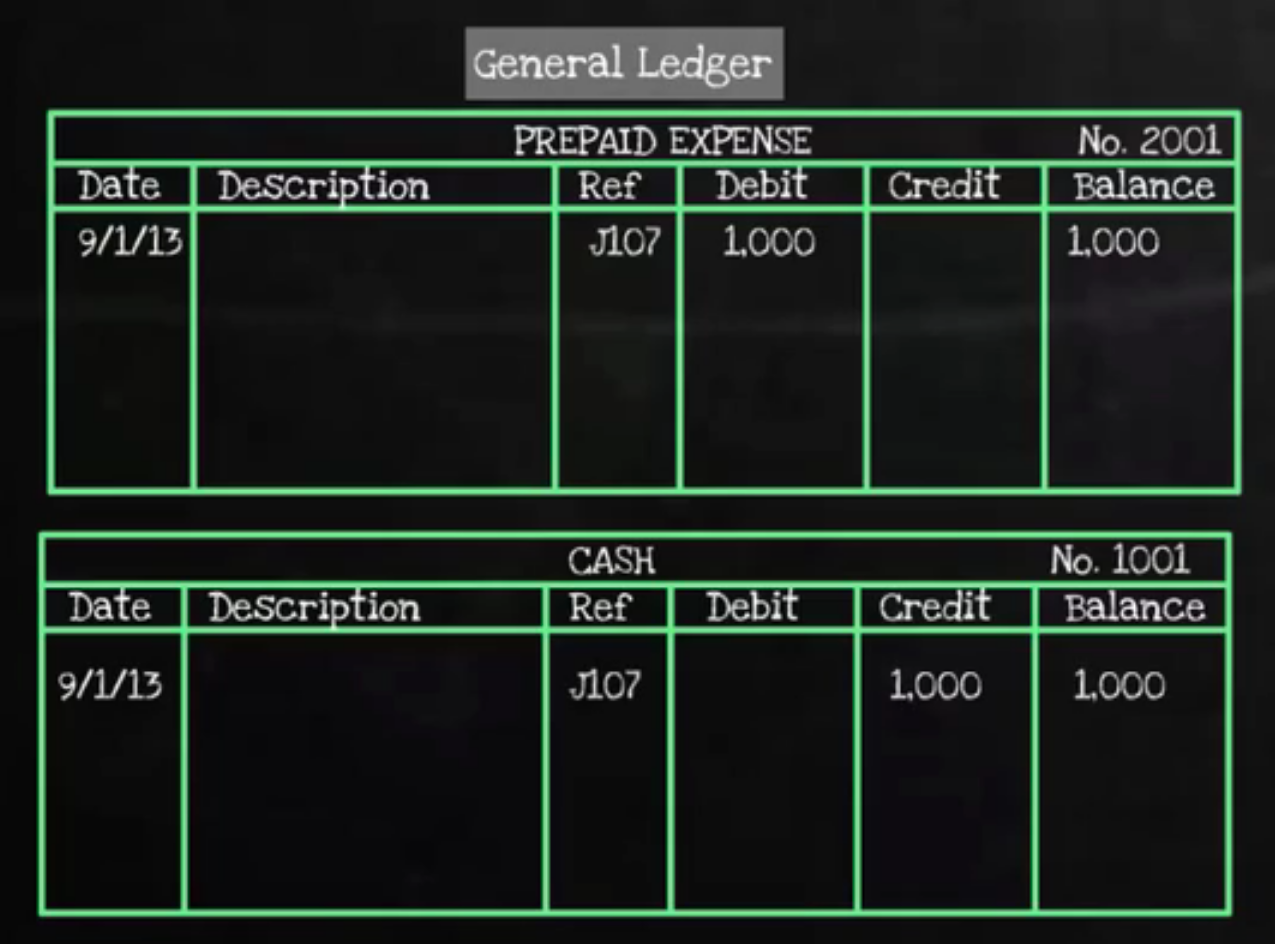