Or
Close Popup
+
4 Tutorials that teach Predictions from Best-Fit Lines
Take your pick:
Previous Next

Calculate the value of a response variable using a least-squares line.

(more)
See More
Tutorial
what's covered
This tutorial will explain prediction from best-fit lines. Our discussion breaks down as follows:

A best-fit line can be used to make predictions about the response variable based on some value of the explanatory variable.

The data here is the miles and airfares for different city destinations from the Minneapolis/Saint Paul Airport.


In this case, you'd figure that miles is the explanatory variable because, in theory, things that are further away should cost more to get to, based on gasoline, etc.

The regression equation is predicted airfare is equal to 113.11 plus 0.137 times miles.

Suppose you are asking what the predicted airfare would be for a flight from Atlanta from Minneapolis, which would have a total distance of 1,064 miles. To find the airfare, simply put 1,064 in for miles in the regression equation.

Look back at the data.

What about the predicted airfare for a flight to Anchorage at a distance of 3,163 miles from Minneapolis?

You can't really use the prediction equation to predict what the airfare to Anchorage would be because this distance is so far out of the bounds of the data that you use to actually create the model.

The range of miles that was used to create your model was from about 400 miles away from Minneapolis to about 1,300 miles away from Minneapolis. Charleston was the longest distance away, and Chicago was the shortest distance away. What you're saying is that within the window of 400 to about 1,300, the line gives reasonable predictions for airfare.


Outside of that window, though, it might not. Therefore, you have to be very cautious about using this prediction line to predict the airfare to Milwaukee, which is closer than 400 miles to Minneapolis, or to a place like Anchorage. It might not give accurate predictions outside of this particular window.

It's not always bad to extrapolate, because sometimes linear trends do continue outside of the window from the data that made them, but not always.

Men's Olympic gold medal 100-meter dash times have decreased at a rate of about 100th of a second per year for the last 60 years. The graph below shows this relationship. 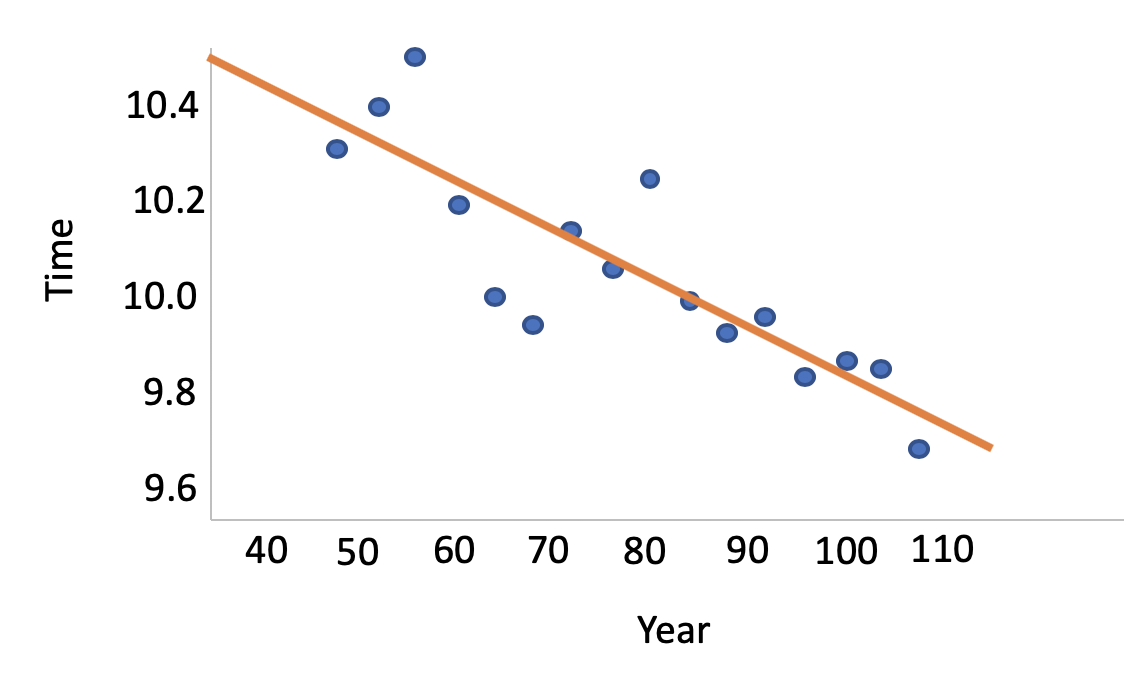 Someone who extrapolates might say that if this trend continues, then in about 1,000 years, there will be a person whose gold medal sprint time is zero seconds.

Clearly, this is nonsense. You can't use this line to predict what might happen even 100 years down the road, much less 1,000 years down the road. Extrapolation might not be a good idea, especially with this particular data set, because it can lead to nonsense results.

Using the regression line to make predictions outside the window for which the model was intended.

summary
A linear model is a reasonable predictor of response values. In our example, we used airfare values within the range of values of the explanatory variable, within the range that created it. Using that model to predict responses for values outside that range is called extrapolation. This should always be done with caution because sometimes it gives you values that don't make any practical sense. Extrapolation is the reason why sometimes the y-intercept of a least-squares line doesn't have a meaningful interpretation.

Using the regression line to make predictions outside the window for which the model was intended.