Tutorial
what's covered
In this tutorial we will focus on one of the arguments most commonly used in favor of conventionalism, before considering some other difficulties the conventionalist might run into. Our discussion will break down like this:

To begin with, recall that conventionalism is a relativist theory of ethics that maintains that what is good is determined relative to a society, convention, or culture. On this account, no society or culture is better than another.

A popular way to support conventionalism is to appeal to the cultural differences argument. The argument goes like this. 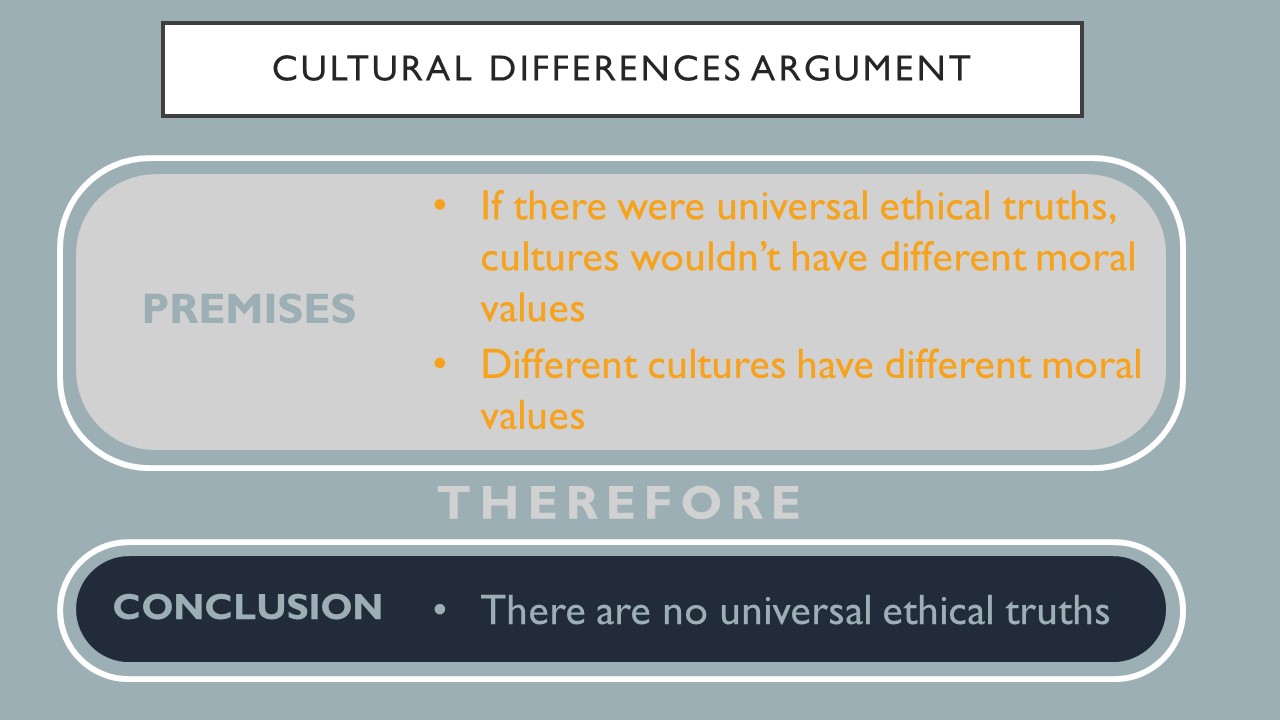 This seems like a powerful argument. But let’s look a bit more closely. How might you start to evaluate this argument?

Let’s say you start by asking if it’s valid. Recall that an argument is valid if, assuming the premises are true, the conclusion is also necessarily true. The cultural differences argument is valid. This is because, if we assume (1) cultures wouldn’t disagree about morality if there were universal ethical truths, and (2) that cultures do in fact disagree, then it follows logically that there are no universal ethical truths.

Now let’s ask if its sound. Recall that a sound argument is one that is both valid and all the premises are true. The second premise (different cultures have different moral values) seems true. But the first premise is more questionable. In the next section we will see why.

The first premise of the cultural differences argument basically says moral disagreement shows there isn’t any objective morals that we could all agree to. But this doesn’t seem true. That’s because we can disagree and there still be a truth of the matter.

Just because we disagree, it doesn’t mean there isn’t a correct answer to the question whether the universe had a beginning or if it’s always been there. We just don’t have conclusive evidence yet.

Again, this shows that conventionalism is wrong to think disagreement establishes there are no objective truths. And this means that it’s also wrong to say that anyone’s view is as justified as anyone else's.

One of the consequences of what we’ve said, is that a culture isn’t necessarily justified in its beliefs. A conventionalist might give a very accurate picture of the morals of a specific culture or society, but it doesn’t mean that these morals ought to be followed.

It used to be accepted in many countries that a man could force himself on his wife, and it wasn’t classified as rape.

Today, most people would say that this was wrong. In a similar way, it used to be thought that poor people shouldn’t be allowed to vote, but now this is widely rejected. Just by pointing out differences in ethical views, then, you can’t justify those views.

A final possible problem for the conventionalist is that it appears there are in fact some agreements across cultures. For instance, most societies say that killing is wrong. But a conventionalist might say examples like this don’t count. They could argue that the prohibition against killing isn’t an ethical truth, but just a way for humans to survive.

think about it
All animals eat to survive. But would you say that animals make an ethical decision when they eat in order to survive?

If the only reason humans don’t kill each other is to survive, it also doesn’t seem like an ethical decision. Rather, it seems like it’s just something that we do as the kind of animals we are.

summary
We started this tutorial by analyzing the cultural difference argument. Although it’s clearly valid, it wasn’t obviously sound. The soundness of the argument was evaluated by looking at its second premise and asking does disagreement prove relativism? We answered “no” to this question because there can still be a truth of the matter even if we don’t agree. Finally, some further problems were considered, as was a potential response from the conventionalist.
Rating
Poor Fair OK Good Great
© 2020 SOPHIA Learning, LLC. SOPHIA is a registered trademark of SOPHIA Learning, LLC.