Or
Close Popup
+
2 Tutorials that teach Production Function and Constraints
Take your pick:
Previous Next

Differentiate between fixed and variable inputs for a company.

Tutorial
what's covered
This tutorial will cover production function and constraints, through the definition and comparison of fixed and variable inputs.

We know that factors of production are land, labor, and capital, and firms have to purchase them to produce anything.

These inputs that firms purchase are categorized as either:

A fixed input is a factor of production or input that cannot be changed in the short run.

This makes sense, if you think about it, because anything that is fixed doesn't change--it stays the same.

No matter how much the firm produces, these do not change, and their cost stays the same as well.

An example of a fixed input is a factory, building, or office space. Typically, a business would lease this for a period of time. They have a contract and the cost is exactly the same every month. Even if they produce nothing, they still have to pay rent. If they produce more, the rent stays the same.

Businesses are often making production decisions regarding if they should we produce more or produce less. As they produce more or less, these input, as well as their cost, do change.

Examples of variable inputs include labor or machinery. If a firm decides to produce more, they can quickly hire or buy new machines. If they decide to produce less, they can lay off some workers.

A factor of production (input) that depends upon the level of production. Variable inputs change depending upon how much we choose to produce

These costs actually define the difference between the long run and short run.

Remember, if something is fixed, it cannot change. For example, you cannot immediately expand your factory or get out of your current lease.

Conversely, the long run is the time in which all of these inputs or costs do become variable.

For instance, you can renegotiate your lease and make major changes to your firm in the long run.

Now, all firms must decide how to produce their good or service, factoring in:

They must consider what combination of labor and capital will minimize their costs and maximize profit.

To do this, they use a production function, which is a mathematical relationship between inputs and output. In the context of economics of the firm, cost and profit can be determined through cost and profit functions.

Here is a production function for a product such as cars, for example. The axes reflect two different inputs: machines and labor. 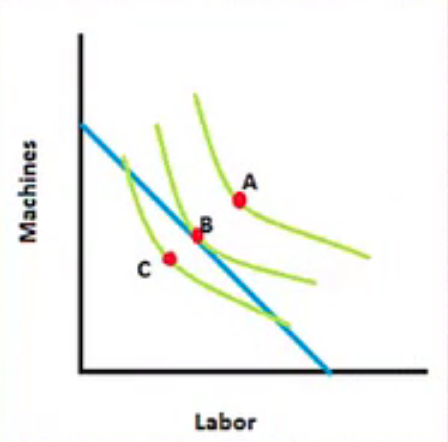 A production function lists all possible combinations of workers and machines that can make different quantities of a product--in this case, cars.

The green curves are called isoquants. They represent combinations of labor and machines that will produce a certain amount of output.

Anywhere along each curve would represent the combination of labor and machines that produces each respective amount of output.

The blue line represents combinations of labor and machines for a given cost, called isocosts.

If you look at the one isocost curve on this production function, note that the point of contact with the y-axis represents the extreme of spending the entire budget on only machines and no workers.

The point of contact with the x-axis represents the other extreme of spending the entire budget on all workers and no machines, or having no capital input at all.

Anywhere else along the curve reflects combinations of labor and machines that all cost the same amount.

A mathematical relationship between inputs and output. In the context of economics of the firm, cost/profits can be determined through cost/profit functions.

Let's compare a production function to a utility function.

The utility function below shows the indifference curves and the line representing the budget constraints. Anything within the green area is within the budget. 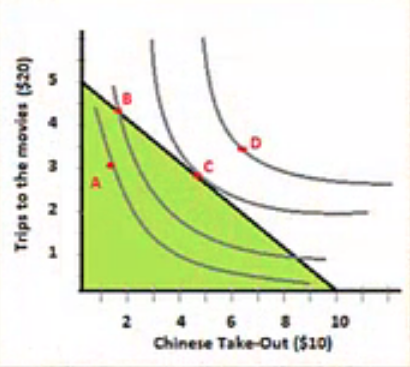 This particular utility function looks at consumer choices and preferences between two goods--trips to the movies and Chinese take-out.

A utility function is used to determine how consumers can maximize their utility within a budget constraint. 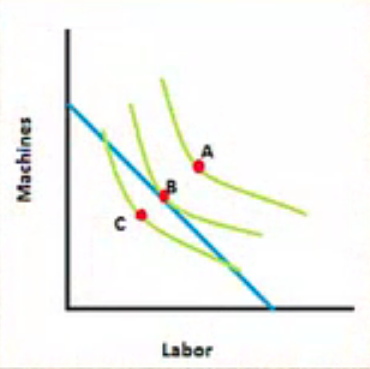 Firms maximize their returns by minimizing cost according to their production function.

So, consumers maximize utility by consuming on the highest indifference curve within the budget constraint. 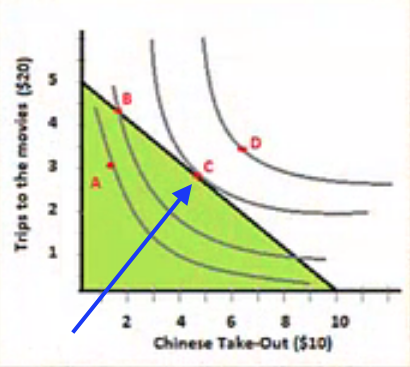 Producers, on the other hand, will minimize cost by selecting the combination of machines and labor according to this production function in the same way--on the highest isoquant curve within their budget, on the blue isocost curve. 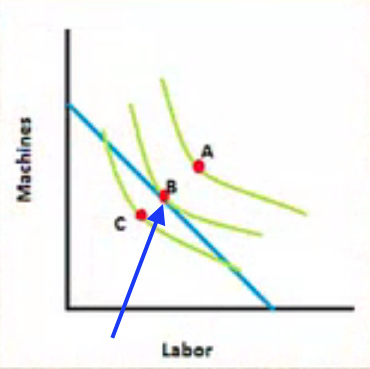 summary
Today we learned about the different types of inputs for firms: fixed and variable inputs. We learned how these help us to define the short run vs. long run. Remember, in the short run, there is at least one fixed input, while in the long run, everything becomes variable. Lastly, we learned how production functions are similar to utility functions, but they help firms to maximize their returns.

A factor of production (input) that cannot be changed in the short-run.

A mathematical relationship between inputs and output. In the context of economics of the firm, cost/profits can be determined through cost/profit functions.

A factor of production (input) that depends upon the level of production. Variable inputs change depending upon how much we choose to produce.