Or
Close Popup
+
2 Tutorials that teach Project Methodologies
Take your pick:
Previous Next

Tutorial
what's covered
This is a lesson on project methodology. Specifically, two types of projects will be covered in depth:

The project manager chooses the method based on how much is known about the requirements for the expected deliverables.

The process used to manage the project life-cycle.

Phase-based projects are used when the results are well defined, for example, in the construction of a house. Phase-based is also used for safety-critical projects, such as avionics software for airplanes or nuclear power plant monitoring. Planning is considered the most important aspect of a phase-based project.

Before any work begins, the project team will create detailed documents outlining the requirements for the deliverables, the schedule and the budget, and a timeline showing exactly how the work will proceed. 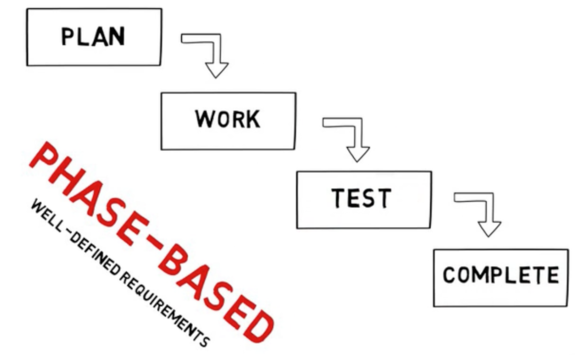 A phase-based project will then proceed sequentially through each step, with the intent that the planning phase will not be revisited. That's why this type of project is often known as a “waterfall project” because it is difficult to move back upstream once you've moved on to the next stage.

Iterative projects, on the other hand, don't put such an emphasis on planning. They are used when the final product cannot be as well known when the project starts, or when the results are more difficult to define.

So how does that work if the project doesn't know what it's producing? Each stage of an iterative project focuses on creating small deliverables that help inform the next stage of development. Between each stage, the deliverables from the last stage are tested and new plans and new deliverables are targeted for the next stage.

It might be easier to think of an iterative project as a collection of small phase-based projects completed in succession. These continue until the project has produced a product that satisfies the initial goals.

One well-known iterative methodology is called “agile”, and there is a defined process for how it should proceed. You'll often find this and other iterative methodologies common in the technology projects that we discussed earlier, and also in research and development.

try it
You are the project manager at a video game company and you are in charge of developing an educational new video game for pre-school kids.

Question: Which methodology would you use and why?

Answer: The iterative project may be a better choice since it's difficult to know what is considered fun for the target demographic until the project has actually created a partial product.

The process used to manage the project life-cycle.