Determine the reasons why a project may fail.

(more)
See More
Tutorial
what's covered
This lesson is about project success and failure. Failure can occur for any reason, but this lesson will focus on four main categories:

A project is considered a project failure if it never concludes or if it doesn't achieve its defined outcome. The first category of failure involves problems with project participants. These issues can arise with all members of a project team.

Perhaps the project sponsor is wrong. A sponsor chosen by seniority instead of passion or knowledge of the project goals is often an issue. A sponsor must be committed to resolving the problem or opportunity the project is trying to address.

A project team can be chosen poorly. A team might be transferred to a new project only because they just completed another project, with little consideration for their expertise or applicability to the project. On the other hand, a team might be cobbled together from broad areas having no relationship to the new project to which they're now assigned. 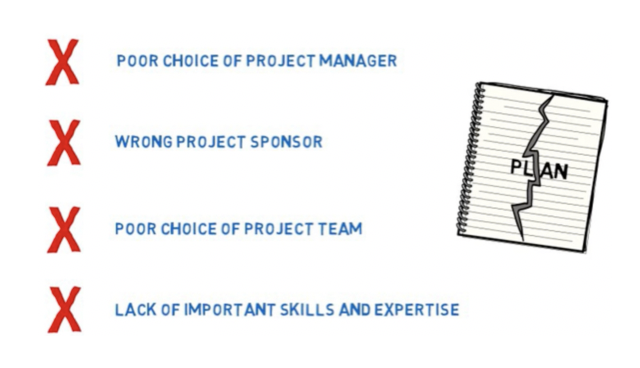 Now, a project manager might not have control over hiring or even the choice of project members or sponsors. But if they see these issues with people on a project, it's still their responsibility to communicate to the stakeholders about the problems that might result from these choices.

A project not concluding or achieving its defined outcomes for any reason.

Sometimes those without project management experience don't see the value in a consistent process and they avoid it altogether. Perhaps when the project is small or simple, they succeed for a short period of time. When issues arise, as they often do, the lack of communication and consistency immediately becomes a problem. Then that project manager will be left struggling to put a process into place for a project already in the middle of work.

Perhaps, though, a project manager is not given sufficient authority. They're required to submit all decisions to stakeholders or another committee, for example. Though a project can succeed in this manner, the delays caused by the decision-making process must be acknowledged and planned at the beginning.

An unclear scope is one of the primary reasons for project failure and is often a result of process problems. Either the scope wasn't defined clearly at the beginning of work, or there's not a process in place to address changes in scope quickly. In either case, scope changes will impact the budget and the schedule. Too many changes can be catastrophic for a project.

In addition to scope, if the project risks are not identified early and risk mitigation plans put into place, then projects can waste precious time and resources when those risks occur. 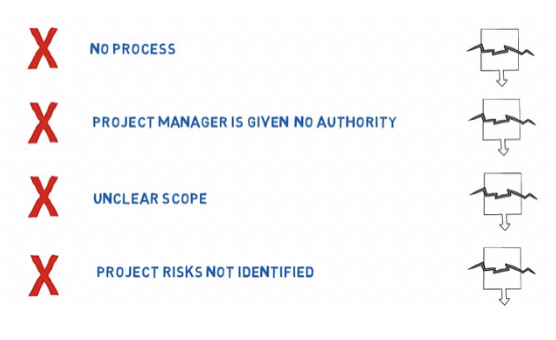 Project management is often about clear and concise communication with all members of a project. Lack of communication can make many problems worse.

If the information is not shared quickly, both about a project's positive and negative issues, a project can fail.

If key stakeholders are kept out of the communication loop or if the stakeholders aren't identified during an early phase, then they may not cooperate as well when a project needs their assistance.

Communication might be happening, but if it's not clear and effective, then the message might be lost. There is quite a bit of noise in a project, and it's up to the project manager to understand what details need to be passed along to different individuals.

If stakeholders are unable to come to an agreement, possibly it's because they've not received the correct communication. In that case, a project can halt in its tracks. 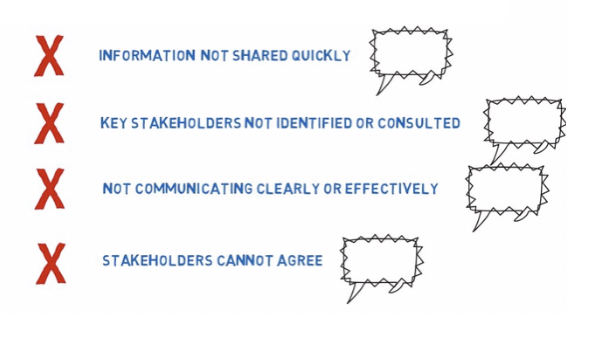 Not everything is going to be within a project's control, though. Unforeseeable circumstances can hurt a project.

Changes in an organization structure, perhaps due to a merger or an acquisition, can change the goals and the scope of a project.

Though we hope it doesn't happen, company downsizing can remove key project members and lead to project failure.

There are many issues outside of a project's direct control and even issues that are beyond an organization's control. The marketplace could shift such that the results of a project are no longer needed. Just ask anyone who worked on a project that involved vinyl records, cassette tapes, or VHS. The competition might be a project to its goals, forcing changes in the final deliverables.

It might seem as if nothing can be done about these unforeseeable circumstances, but that's not true. It is still the project manager's role to establish processes that can help a project team respond quickly to any issues, even those outside their control. It's a project manager's direct responsibility to continue to communicate with everyone about the project status, no matter what occurs.

It can be challenging talking about potential failure. But a project manager must understand the ways a project might fail since it's their role to help everyone handle setbacks and ultimately help a project succeed.

summary
A failed project can be the result of project participants that include the project manager or a team that does not have the appropriate expertise. Problems with the project process includes unclear scope and issues with communication may include lack of agreement between stakeholders. There are some issues outside of the control of the project manager which fall under the category of unforeseeable circumstances such as company downsizing or acquisitions.

Source: This work is adapted from Sophia author Jeff Carroll.

A project not concluding or achieving its defined outcomes for any reason.