1. Define pronouns
2. Give examples of pronouns
3. Explain and exemplify pronoun "situations" and errors in writing.

This packet will define pronouns and give examples of them in writing, as well as giving examples of potential pitfalls in writing when using pronouns.

Pronouns are substitute words for nouns. Generally, they refer to another word or words in the sentence.  Sounds simple, but it's a little more complicated than that.

Secondary pronouns include one, it, there, and the "wh--" pronouns.

One's forms are one (nominative), one's (possessive), and oneself (reflexive).

It's usages are foursquare: referring, anticipatory, cleft, and prop.

There is considered the existential pronoun, to be distinguished from the adverbial form.

The "wh--" pronouns are those beginning with wh, with the exception of how. They are of five forms: interrogative, exclamative, relative, nominal relative, and conditional.

Personal Subjective (Nominative): I, you (singular), he, she, it, we, you (plural), and they. And one, which I shall explain later.

Possessive Independent: mine, yours (sing.), his, hers, its, ours, yours (pl.) and theirs.

Reflexive: myself, yourself, himself, herself, itself, ourselves, yourselves, and themselves.

Demonstratives: This, That (singular) These, Those (plural) 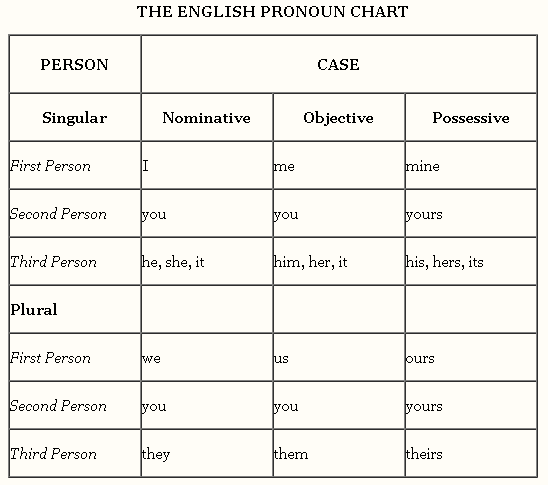 The nominative case is used as a subject or as the complement of the subject. I saw the car. "I" is the subject, and is nominative.

As a complement, it "renames," or "restates" the subject, and follows a form of the verb "to be."  Answering the phone, traditional etiquette says you would say, "This is she."   "She" is the complement of "This."   In another situation, you might say, "It is I." "I" is the complement of "it."  You are saying "This is she" instead of "This is Sarah." Sarah renames "This." "She" also renames "this." The concept is the same with "It is I."

That's the traditional style (and in my mind, still the correct style.) But colloquialism has subverted the traditional usage, at least in conversation, so many people now use the objective form after the form of the verb "to be," saying "It's me," or "That's me." Instead of "This is Sarah," people will say "This is her."  Some teachers will accept the objective, simply because it is so prevalent, and they have succumbed to evolution of language. But colloquial doesn't mean "correct," so, if you're writing an essay, use the nominative. Especially in college; those English profs will grill you until you're charred if you use colloquialisms in a paper.  (I once used "-wise," as in "Thinking-wise, I thought he did well" in front of the English department head. She told me in no uncertain terms that, should she ever hear me say any form of "-wise" used in that manner again, or hear from someone else that I had used it, she would kick me out of my major [English]. I've never said it again. In fact, she passed away about twelve years ago, but I still won't use "-wise".)

Objective pronouns are used in all situations in which a noun would be used as an object: direct object, indirect object, and object of a preposition. (If you don't know what these are, you'll find them discussed in packet ENCO224: "Direct and Indirect Objects.")  Examples:

Direct Object: "We found Charlie hiding under the porch."  We found what/whom? We found Charlie. Therefore,  "Charlie" is the direct object.  Let's rephrase: "We found him under the porch." Again, we found what/whom? We found him (pronoun for "Charlie"). So "him" is the direct object. "Charlie" is objective, so the pronoun standing in for "Charlie" has to be objective. Has to. Simple as mud.

Indirect Object:  Al-l-l-l righty then. Indirect objects indicate that something is happening to or for something or someone. The words "to" and "for" are often elliptical; that is, they are understood to be written or said. Example: "He gave (to) his date a corsage for the dance." He gave the corsage to his date. OK?  Let's rewrite with a pronoun: "He gave (to) her a corsage for the dance." "His date" is an objective phrase, so the pronoun replacing it has to be objective, so it's "her."  Using the nominative (wrong!) would say this: "He gave she a corsage...."  A kindergartner knows that's wrong. Recheck the chart in the previous section if you have a question.

Object of a Preposition: All prepositions have objects. The combination is called a prepositional phrase (more than one word without a subject and verb = a phrase). That is, the preposition refers to something. My sixth-grade teacher used to say," Think of a pencil and an eraser. The pencil can be over, under, between (two erasers), among (three or more erasers), around, about, through, with, without," and so on. All related to the eraser. The eraser is the object of all those prepositions. If a pronoun replaces that object, it, too, is the object, so it has to be in the objective case. Simple? Actually, yes. Pure and simple.

Another one: "The Barbie doll that Tommy received for Christmas was meant for his sister."  The prepositional phrase is "for his sister." Substituting a pronoun, we say "for her."

The possessive case is self-explanatory. It refers to "ownership" of a thing or idea. They are either dependent or independent.

The dependent possessive pronouns are my, your (sing.,) his, her, its, our, your (pl.) and their.

The independent possessive pronouns are  mine, yours (sing.), his, hers, its, ours yours (pl.) and theirs.

Dependent possessive pronouns are modifiers, so they require a noun to modify. They are "dependent" on that noun.

Independent possessive pronouns can stand on their own.

Dependent pronouns can be emphasized by a following own: It was her own Ford.

In the simplest terms, the narrator explains what reflexive pronouns are,and how they are used. You will understand immediately.

Grammarian Jane Straus (quickly) explains the difference in the usage of who and whom.

Whoever vs Whomever: A Conundrum

In their simplest usage, "whoever" is nominative (used as a noun); and "whomever" is objective (used as an object.) At times, though,  it isn't that simple, as witnessed in this grammar discussion forum:

Please, someone back me up here. "Whoever comes to the door" is a noun clause that is the object of the preposition "to," actually functioning as an indirect object in this sentence. Within the clause, the subject is "whoever." By virtue of the fact that it is the subject, it has to be in the nominative case - whoever, rather than whomever.

The correct answer is "Give the package to whoever comes to the door".
The agreement is always within the subordinate clause, not within the main clause, when there seems to be a conflict.

The pronoun one can be nominative (one), possessive (one's), or reflexive (oneself). It is usually used in lieu of the other generic pronouns; you, we, and they.

One cannot be too careful on the highways these days. (nominative: subject of the sentence)

One's work should be done as well as can be done. (possessive of "work")

It's not a good idea to put oneself in danger. (reflexive)

The pronoun it has four uses: referring, anticipatory, cleft, and prop.

Anticipatory: It's a shame that he can't be here for his daughter's wedding. ("It's" is the subject, used in "anticipation" of, and to emphasize, the clause "that he can't....wedding.")

Cleft: It is the ability to do the job that matters, not where you come from or what you are. ("Cleft" means "cut." The sentence is "cut" into the main focus, followed by a related part.)

Prop: Unfortunately, on both Saturday and Sunday, it really snowed. (Prop "its" are usually used when discussing the weather or time. In teh preceding sentence, "It" is the subject, but is the antecedent of no other word.)

The "existential" pronoun there should be distinguished from the adverbial there.  "When I went through Romania, there were guards there, as well." (The second "there" is an adverb, whereas the first one is a pronoun.)

"Wh--" pronouns refer to those which begin with "wh."  They are interrogative, exclamative, relative, nominal relative, and conditional.

Interrogative: Who, whom, whose, which, and what.

"Who" and "whom" are both personal pronouns. "Who" is nominative, and "whom" is objective: "Who else can we nominate?"  "We need to know when the car was serviced, by whom, and what guarantees are involved."

"Whose" has only personal references: "Whose book is that?"

"Which" can be personal or impersonal in its use: "Which of your friends are you closest to?" (personal)  "Which is better: to clean the wax out of your ears, or to go around with wax in your ears?" (impersonal)

"What" is an impersonal interrogative: "What do you want for dinner?"

Exclamative  What. Not used as an interrogative, but more as an exclamation. "What a great dinner that was!"   "What a labyrinth of lies and deceit was closing in around her."

Relative: Relative pronouns -- who, whom, which -- usually come at the beginning of relative clauses: "I went to dinner with a girl named Kate, who's in my math class."

Nominal Relative: Nominal relative pronouns introduce relative noun clauses, which function as nouns: subject, direct object, etc. The nominal relatives are who, whom, whoever, whomever, whosoever, and whomsoever. (The latter two are archaic, seldom used today.) Other nominal relatives: which, whichever, whichsoever, what, whatever, whatsoever. ("Whichsoever" is archaic, whereas "whatsoever" is still used, for emphasis.)

Wh-- Conditional  "Wh--" conditionals are compound words beginning with "wh" and ending in "-ever." Whichever, whoever, whomever, and whatever.  "Whoever" is nominal, and "whomever" is objective.

Indefinite pronouns are so labeled because they refer to nothing in particular. Their antecedents are either general or non-existent. They can be divided into four groups: Assertive, Non-Assertive, Negative, and Universal.

Assertive: Some, someone, somebody, and something. (have a positive force)

"Something is wrong with this picture."  "Something," as the subject, has no antecedent.

Non-Assertive: Any, anyone, anybody, anything, and either. (have a negative force) ("Either," in this case, is not used in an "either-or" conjunctive situation)  Ex: "Not a problem. I'll eat either of those cookies." (used as subject)

Negative: None,  no one, nobody, nothing, and neither.  ("None" can be used as either singular or plural.) ("Neither," in this case, is not used in a "neither-nor" conjunctive situation.) Ex: Neither of us is going to the club meeting. (used as subject)

Universal: All, everyone, everybody, everything, both, and each. ("Both," in this case, is not used in the "both-and" conjunctive situation. Ex: "I saw both of the Stones concerts."  (used as direct object)

There are four primary demonstrative pronouns: this, that, these, and those.  "This" and "that" are singular; "these" and "those" are plural.

This paper builds on that study to allow the grid to used to manage traffic in large cities.

They would set out these policies, and then the senate would implement those policies on the basis of a majority vote.