Identify ways to protect yourself from fraudulent investment schemes.

Tutorial
what's covered
In this lesson, you will examine ways to protect your investments from losses and frauds. Specifically, this lesson will cover:

1. Protecting Yourself as an Investor

The table below summarizes some of the most important savings and investment products that you are likely to use during your lifetime financial journey. Note especially the level of risks and returns associated with each asset (with four stars being the highest risk).


One thing should stand out from the previous table: Few of the investments that you are likely to use to build wealth provide any type of protection against losses linked with fluctuations in the markets. Although it is true that the government works daily to help make the investment world safer, only bank and credit union savers have access to direct account insurance.

Federal and state regulators constantly monitor the investment and insurance marketplace for wrongdoing on the part of companies and individuals. Regulations are in place to make sure that a baseline level of safety exists in the event of a firm or system-wide failure that could result in the loss of cash or securities.

hint
SIPC insurance does not protect against either the decline in the value of your securities or bad investment advice.

Even with FDIC and SIPC insurance in place, you cannot afford to be complacent about your money or investments. It is important to take steps to be aware of possible frauds, misrepresentations, and consumer rip-offs. You can do this by:

Most importantly, you can protect yourself by always applying the principles of diversification. This means spreading your wealth among different assets, accounts, and advisors.

Bernie Madoff was one of the most respected and influential people on Wall Street. He ran the worldʼs largest hedge fund, which is a private investment company that caters to the investment needs of wealthy individuals and organizations. Letʼs learn a bit more about hedge funds and Bernie Madoff.

Hedge funds get their name from the investment approaches these firms use to manage client money. Hedge funds pool money from wealthy investors and invest in securities or other types of investments with the goal of obtaining positive returns. Hedge funds, however, tend to be less well-regulated than other managed investment products and services, like mutual funds. Because hedge funds are not highly regulated, hedge funds can only solicit investments from accredited investors. An accredited investor is someone who has: Here is how Madoff described his hedge fund to investors and federal regulators. This last point is important because it paved the way for one of the biggest frauds in recent history.

Someone who has earned income that exceeded $200,000 (or $300,000 together with a spouse) in each of the prior two years and reasonably expects the same for the current year; and a net worth more than $1 million, either alone or together with a spouse (excluding the value of the person’s primary residence).

Madoffʼs firm was so successful that he was able to establish strict standards for those that he would accept as clients. Typically, clients had to have several millions of dollars to invest and be politically and socially connected. Investing with this man was considered a privilege, and people lined up begging to give him their money.

Madoff was able to perpetrate his scheme using the media as a way to promote his investing record. Here are examples of what the financial media reported about Madoff before he was exposed as a fraud.

After reading these glowing reports, would you have invested with Madoff? Unfortunately, many people who had the chance answered “yes” without asking the right questions. His clients failed to uncover that Madoff was engaged in running the worldʼs largest Ponzi scheme. As shown in the following illustration, he used money coming into the firm from new investors (new victims) to pay off previous investors (old victims). Few actual investments were ever made. For the fraud to work, Madoff needed to bring in more investors every year. His fraud was exposed when some investors wanted their money back, but Madoff could not find enough new investors to pay them back. When Madoffʼs fraud was discovered, his clients had already lost an estimated $50 billion! 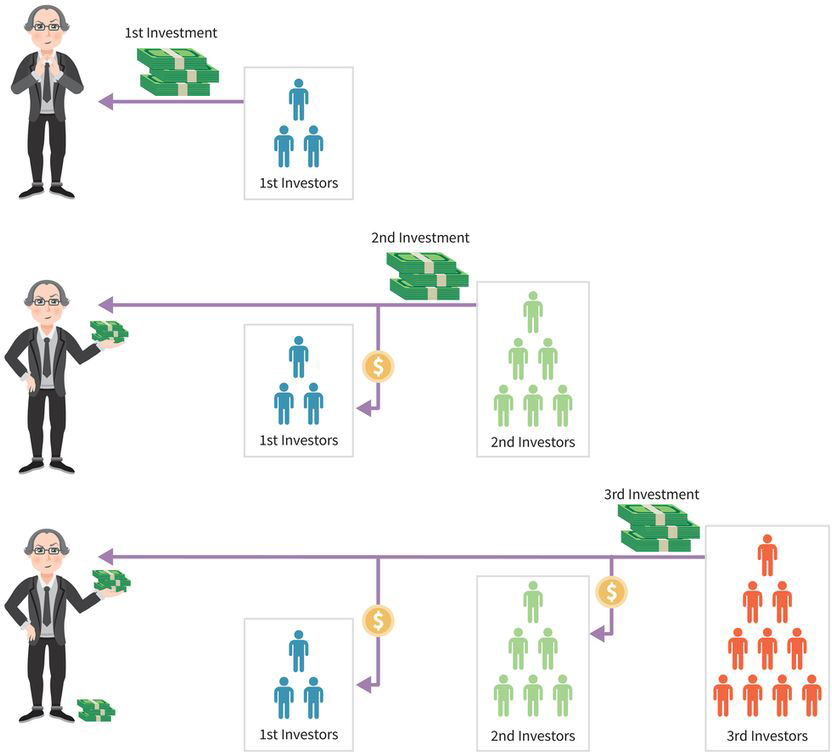 hint
Cases like that of Madoff are actually quite rare; it is therefore important not to paint all financial advisors with a negative brush.

As you continue your lifetime financial journey you can learn several important things from the Madoff case:

Assume that a fraudster using a classic Ponzi scheme starts with 6 investors and plans to increase the number of new investors by a multiple of 6 every year. In other words, the fraudster plans to take money from 6 people in year one, 36 in year two, 216 in year three, and so on. The fraudsterʼs plan is to use money from later investors to pay off previous investors (plus pocket some money along the way). How many years will it take for the fraudster in this scenario to run out of investors if you consider that the worldʼs population is around 13 billion people?

Here’s the solution:
It will take approximately 13 years before the fraudster in this scenario runs out of investors, as the following shows. This is how Ponzi schemes fail. At some point, the number of potential victims drops to zero.


summary
In this lesson, you learned how to protect yourself as an investor. You studied the fraudulent Ponzi scheme orchestrated by Bernie Madoff which promised investors unusually high rates of return. This cautionary tale represents one of the biggest frauds in recent U.S. history. The tale emphasizes the importance of being skeptical of unrealistic financial promises.

Madoff’s scheme was operating behind a hedge fund. This is when a private investment firm pools money from wealthy investors to put into securities and other investments. Hedge funds are less regulated than more common managed products and services, and they only allow accredited investors to participate.

Someone who has earned income that exceeded $200,000 (or $300,000 together with a spouse) in each of the prior two years and reasonably expects the same for the current year; and a net worth more than $1 million, either alone or together with a spouse (excluding the value of the person’s primary residence).