Determine explanations or possibilities in given hereditary examples

Tutorial
what's covered
This lesson is going to cover Punnett squares and their use by looking at:

Punnett squares are tools that are used to determine the probability or the chance that a trait will show up in an offspring. Genetic traits are characteristics of an organism that are determined by their genes and are inherited.

An example of a trait could be eye color, height, hair color or certain genetic disorders.

A tool used to determine the probability of offspring inheriting a trait based on the genotypes of both parents.

A measure of the chance of an outcome.

To see how Punnett squares are used, look at this square crossing male and female sex chromosomes: 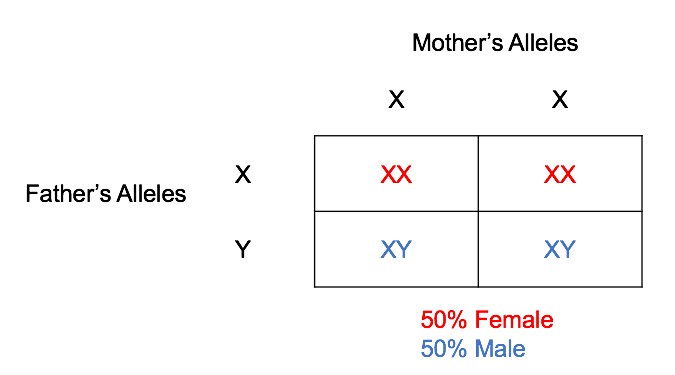 think about it
Using the square above, what are the odds an offspring will be female?

We can see that there is a 50% chance that any offspring would have two XX chromosomes, making the child female.

The physical manifestation of the expression of an organism's genes.

The genes inherited by an organism which represent a trait.

Below is a Punnett square related to hairline showing whether a person is going to have a straight hairline or a widow's peak. A widow's peak is a dominant trait; if a person has at least one dominant allele (W), they will have the widow's peak. 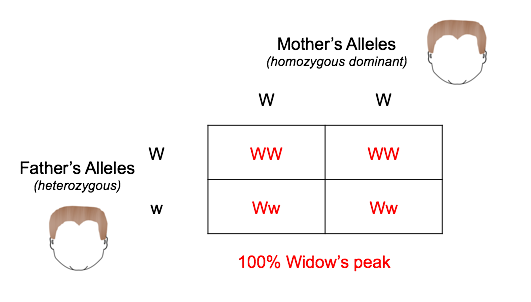 The mom in this example is homozygous dominant for widow's peak. This means that she has the same alleles (W and W), and both are dominant. Her phenotype would be the dominant trait, which is this case means she has a widow’s peak.

think about it
How many of the offspring from this example are going to have a widow’s peak?

We can see that because each box has at least one big W, or dominant allele, 100% of their offspring will have a widow's peak.


summary
Punnett squares are used to determine the probability of inheriting a trait based on the parent’s genotype. The dominant trait will always determine the phenotype of the offspring. The law of Independent Assortment says that traits on separate chromosomes are inherited independently of one another. Keep up the learning and have a great day!

The genes inherited by an organism which represent a trait.

The physical manifestation of the expression of an organism's genes.

A measure of the chance of an outcome.

A tool used to determine the probability of offspring inheriting a trait based on the genotypes of both parents.